World: Brazil and Richarlison start on the right foot, not Neymar

Arrived in Qatar with a beautiful scarecrow label, the team at the five World Cups did nothing to disabuse those who fear it: it made Serbia dizzy, yet resistant for an hour, until they carried the thrust by Richarlison, a fox goal (62nd) then a memorable acrobatic control-scissors sequence that will loop on all the televisions of the planet (73rd). 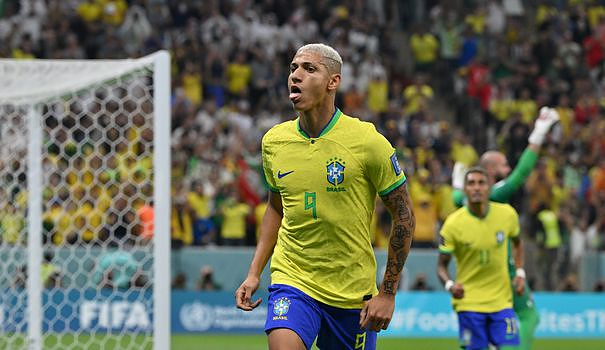 Arrived in Qatar with a beautiful scarecrow label, the team at the five World Cups did nothing to disabuse those who fear it: it made Serbia dizzy, yet resistant for an hour, until they carried the thrust by Richarlison, a fox goal (62nd) then a memorable acrobatic control-scissors sequence that will loop on all the televisions of the planet (73rd).

It is only an entry in the running, of course, and the Brazilians will have to maintain such a level for a month, which will perhaps depend on the state of their master to play Neymar, left with the swollen right ankle , a joint that has already played tricks on him in the past: "Ney" had already been hit in this right ankle in 2019, forcing him to give up playing the Copa America.

In the meantime, Brazil has succeeded in its premiere where others, such as Germany and Argentina, had memory lapses when it came time to go on stage.

"He's one of the favourites," admitted Serbia coach Dragan Stojkovic. "In the second half we declined physically. Brazil took advantage of that, they have great players and they punished us."

Here is already the Seleçao at the head of their group (3 pts) tied with Switzerland, victorious over Cameroon (1-0) and next opponent of coach Tite's team on Monday (5:00 p.m.), in a group G where Serbs, Brazilians and Swiss had already crossed paths at the same stage four years ago.

Is this the year of the Canarinha? Twenty years after their last coronation, Brazil firmly believe in their sixth star, this "hexacampeonato" which has eluded them for two decades, over major disappointments such as the famous 7-1 suffered against Germany in the semi-finals of the Mondial-2014 at home.

Even "King" Pelé on Thursday urged the Brazilians to "bring the trophy home". And the Neymar band has taken their ease in this Lusail stadium, where they hope to return on December 18 for the final of the tournament.

Still, being the big favorite comes with minor drawbacks, such as defensive, tough, compact and determined opponents like Serbia, who had no chance in the first period!

With its ultra-offensive scheme with four attackers, the Auriverde selection revolved around the Serbian fort, trying in vain to go through the wings, through the axis, or even striking from afar, like Alex Sandro who found the post (60th ).

But samba football was a bit out of time: Barcelona winger Raphinha lacked foresight in the last gesture (35th, 46th). As for Vinicius, his counterpart on the left wing, he admired his burst of speed more than his finish (28th, 41st) …

Brazil's usual pass-wall, Neymar had some flashes, such as a direct corner boxed by the goalkeeper (13th) or an instantaneous recovery out of frame (56th). He therefore remained blocked at 75 goals, two lengths from Pelé's record in the Brazilian selection, before leaving in the 79th minute, his ankle swollen.

Meanwhile, after a breakthrough from "Ney", Vinicius was able to strike, the goalkeeper pushed back and Richarlison, who had followed, delivered the thousands of Auriverdes supporters massed in the stands (62nd).

His second goal is admirable, perhaps already the goal of the tournament: control in full surface of the left then returned acrobatic of the right to capsize of happiness the supporters, who then chanted "Olé" with each Brazilian pass.

The score was acquired and if Casemiro found the bar (81st), that does not detract from the results of the evening: Brazil have a good head of favorite … provided that Neymar is quickly recovered.