The pass of four in the viewfinder</p>The Americans, candidates for a fourth world crown in a row, a series that they have never achieved (the USSR won five in a row between 1959 and 1975), are largely favorites. 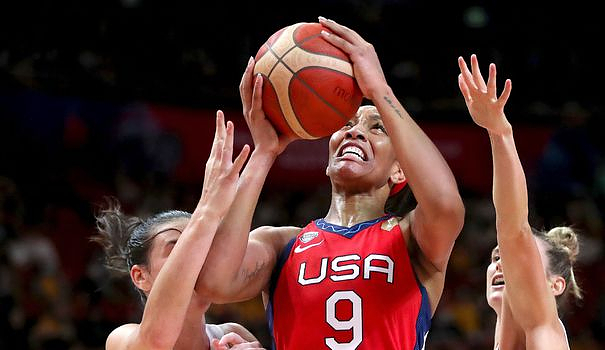 The pass of four in the viewfinder

The Americans, candidates for a fourth world crown in a row, a series that they have never achieved (the USSR won five in a row between 1959 and 1975), are largely favorites.

They blasted Canada (84-43), the author of a solid tournament so far, on Friday when the Chinese won a magnificent showdown against the Australian host (61-59) to reach their second final in the competition after that of 1994, lost (96-87) against Brazil, already in Sydney.

China is visibly comfortable in Australia and it will be able to count on the support of the Superdome spectators (12,000 spectators) on Saturday to try to achieve the feat against the Americans who remain on 29 victories in a row in the competition (last setback in the 2006 semi-final against Russia). They dominated the Chinese in pools (77-63).

On Friday, the large Chinese diaspora living in Australia more than competed with the supporters of the "Opals" to play their role as sixth man in a magnificent and suspenseful match, culminating in this final where the Australian Ezi Magbegor missed the overtime basket at the buzzer.

"It's as if we were playing at home, our supporters gave us a lot of energy," said China coach Zheng Wei.

The Chinese coach estimated that his team should manage to get out of the American embrace better than in chicken to have a chance of styling a first world crown on Saturday.

"They put a lot of pressure on us in defence. I hope we can do better," she said.

The Canadians can testify to the American vice, which suffocated them from the start of the match (27-7 at the end of the first quarter).

"The defense is one of the strong points of our team", recognized the American coach Cheryl Reeve, who had notably prepared a plan to limit the influence of the best Canadian scorer, Bridget Carleton (only 6 pts).

"The plan? Alyssa Thomas! Get on her, I threw it at her," Reeve explained with a smile.

"Our defense is huge. Sometimes we don't make any baskets but we can always count on our defense. That's what wins you titles. We're all focused when it comes to defending", underlined his side the inner A'ja Wilson.

Two towers against a triplet

Wilson, who arrived during competition after winning the WNBA title with the Las Vegas Aces, continued her rise to power on Friday with a double-double (15 pts, 12 rebounds), without drawing on her reserves for the final.

They will face Saturday the two Chinese twin towers, Han Xu (2.05 m) and Li Yueru (2 m), who play like all the workforce in the Chinese championship and share the playing time in the racket.

Against the Australians, it was Han who shone, with a double-double (19 pts and 10 rebounds) plus five blocks.

China will have to count in the final on a new capital performance from its pivots and a better address (51% at 2 pts, 23% behind the arc), in particular with the hoped-for return of its full-back Li Meng, "feverish" against the Australians , according to the breeder.