With the race of her life, the obstacle runner storms to silver

Immediately after the finish line, Lea Meyer was in tears. 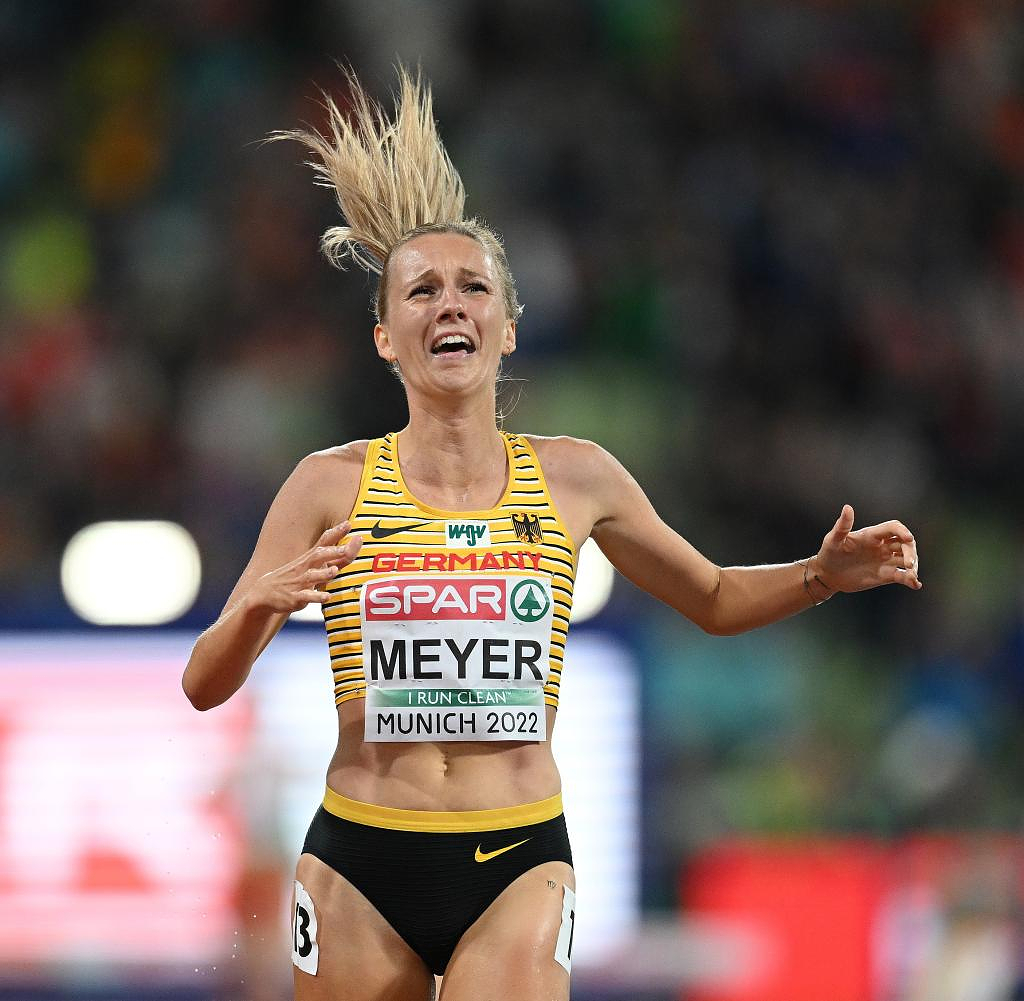 Immediately after the finish line, Lea Meyer was in tears. Shaking her head, she then fell into the arms of the winner. EM silver in the title fights in Munich over 3000 meters obstacle - not even the boldest optimists could count on that.

Shortly after pole vaulter Lita Baehre had taken second place behind Swedish world record holder Armand Duplantis, the 24-year-old's run brought about a completely unexpected success at this European Championship. "From 2000 meters I thought: 'Lea, this is your race today!'" she said afterwards, overjoyed.

After the penultimate day of the European Championships, the German track and field team, for which walker Saskia Feige won bronze on Saturday morning, has 14 medals to show for - and that's just one month after the botched World Championships in Eugene.

Lea Meyer is also reluctant to think back to the title fights there. Because quite differently than hoped, she suddenly made the headlines, a photo from the race around the world: The 24-year-old fell headfirst into the moat at the obstacle. That could have ended badly too.

Now she of all people, about whose mistake many people may have laughed, is running the race of her life at the home European Championship and pulverizing her personal best.

Did she think of Eugene during her brave, because very courageous, approach to the race? "In the last lap I noticed that my legs were flat," she said on ARD: "I just thought: 'Now concentrate!' I didn't want to let the medal be taken away from me anymore."

In the end, in 9:15.35 minutes, she was only beaten by Luiza Gega from Albania (9:11.31 minutes), bronze went to Brit Elizabeth Bird in 9:23.18 minutes. The second German runner Elena Burkard finished twelfth.

Henning von Papen, coach of the middle and long distances, who died at the beginning of the year at the age of 69 after a serious illness, played a large part in Meyer's success. At the thought of him, tears come to her eyes in the interview. Before the final, the 24-year-old says, she thought: "Henning, the race is for you. It is also thanks to you that I am standing here today.”

Shortly before Meyer, Leverkusen's Bo Kanda Lita Baehre was convincing in Munich: The Leverkusen player took silver in the pole vault and thus celebrated his first medal in a major title fight. In the final, the 23-year-old jumped 5.85 meters and was only beaten by high-flyer Armand Duplantis, who defended his title with 6.06 meters.

Most recently, Björn Otto had won a silver medal in the pole vault for Germany at the 2012 European Championships. On this evening in Munich, Litha Baehre jumped 5.75 and 5.85 meters in the second jump, but did not get over 5.90 meters.

Torben Blech from Leverkusen and Oleg Zernikel from Landau, fifth in the World Championships, retired from the medal fight quite early on. Both came just over 5.50 meters and placed eighth and ninth. Duplantis later left it at 6.06 meters, although he had managed all the heights in the first attempt of 5.65 meters and even missed the 5.75 meters. The Olympic champion won the title at the World Championships four weeks ago and improved his world record with 6.21 meters.

‹ ›
Keywords:
LeichtathletikEMLeichtathletikHindernislaufStabhochsprungMünchenLea MeyerLita BaehreFussballUta Pippig
Your comment has been forwarded to the administrator for approval.×
Warning! Will constitute a criminal offense, illegal, threatening, offensive, insulting and swearing, derogatory, defamatory, vulgar, pornographic, indecent, personality rights, damaging or similar nature in the nature of all kinds of financial content, legal, criminal and administrative responsibility for the content of the sender member / members are belong.
Related News