"With the lifesaver seat, the damage from the Granada crash would have been less."

A terrible collision between two buses with a car resulted in the death of a person from Granada on Sunday, July 3. 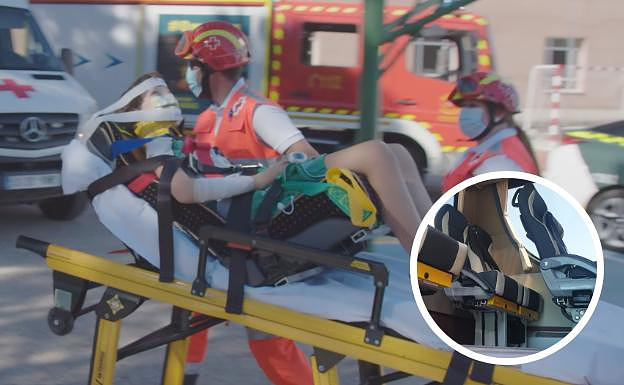 A terrible collision between two buses with a car resulted in the death of a person from Granada on Sunday, July 3. There were 35 injuries. With the installation of life-seats, this could have greatly reduced the damage caused by this tragic accident. Sergio de Rico (general secretary of the Alliance for Road Safety) defends this claim, stating that the E-Rescue system reduces the time it takes to rescue passengers in an accident on a bus. This system also makes it possible for injuries and fatalities to be reduced by half.

Sergio de Rico is an industrial engineer who has been working on this project for 18+ years. He started his career as an emergency technician, and worked in ICUs and ICU ambulances in Madrid. The engineer defends that he has extensive rescue experience and therefore decided to create lifesaver chairs. He points out that the system is patentable, homologated and financed by European Commission. It is also recommended by General Directorate of Traffic.

E-Rescue, a new system for buses, is intended to be used primarily. It is a revolutionary system as it is the first time that something has been installed on a vehicle designed for rescue. Rico explains that while there is pre-accident security, as well as security that is activated at time of accident, a post-accident system has never been installed.

Rico began explaining the mechanism behind lifesaver seat. He explained that the mechanism allows the seat to be released quickly from its anchorage in case of an accident. The seat is strong enough to withstand impact and doesn't crack. However, firefighters can pull a mechanism to release it. To protect victims, the system includes an immobilization harness as well as a cervical collar.

"Bus accidents can be very dangerous. These accidents are often very serious because they have limited space for work and a large number of victims at the same time, which can lead to a shortage of sanitary material. E-Rescue has the collar and harness to aid professionals in an emergency, according to the creator.

Specially designed for buses, Lifesaver seat are called "Lifesaver". Recent DGT tests have shown that these elements can reduce rescue time by 70% from two hours to 30 minutes. This results in more favorable health conditions.

The E-Rescue system was installed in over 120 buses in Spain to date. Work is ongoing to improve its implementation and adapt it for passenger cars. The system was designed for use in buses but there is a project to make it work in cars. Sergio de Rico says that we are currently looking for European funding to make it available in passenger cars.

‹ ›
Keywords:
DanoAccidenteGranadaMenorAsientosSalvavidas
Your comment has been forwarded to the administrator for approval.×
Warning! Will constitute a criminal offense, illegal, threatening, offensive, insulting and swearing, derogatory, defamatory, vulgar, pornographic, indecent, personality rights, damaging or similar nature in the nature of all kinds of financial content, legal, criminal and administrative responsibility for the content of the sender member / members are belong.
Related News