Why Mars is more active than you think

Beneath the Elysium Plane on Mars is a zone roughly 4000 kilometers wide of hot rocks rising from the planet's deep mantle. 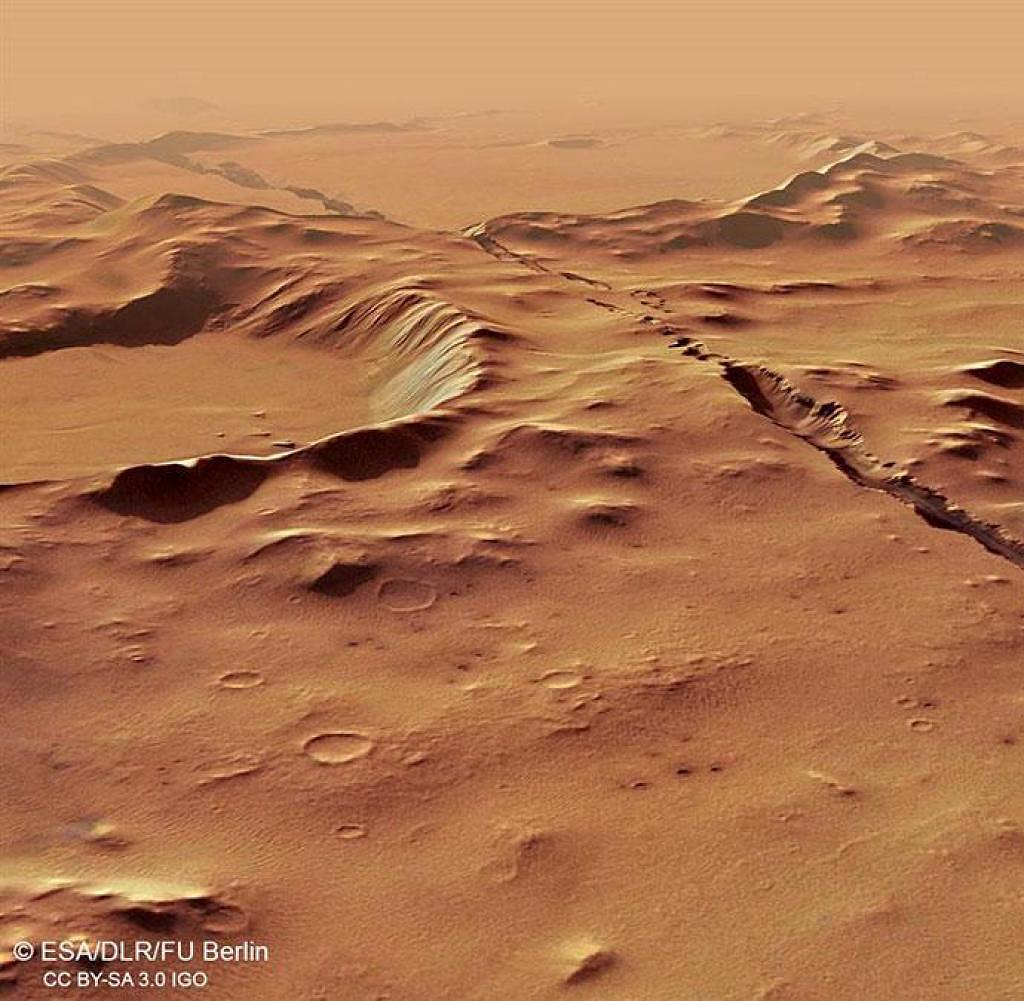 Beneath the Elysium Plane on Mars is a zone roughly 4000 kilometers wide of hot rocks rising from the planet's deep mantle. This is shown by a study by two American researchers that combines all available data on the Elysium plane. The so-called plume provides an explanation for the seismic activity in the region detected by the NASA probe "InSight", the scientists explain in the journal "Nature Astronomy".

"Mars was volcanically and tectonically active mainly for the first 1.5 billion years of its history," explain Adrien Broquet and Jeffrey Andrews-Hanna of the University of Arizona. "But especially in the Elysium Planitia there has been volcanism and seismic activity recently." The lander "InSight", stationed in the Elysium plane since 2018, registered numerous seismic tremors that emanate from the geologically young Cerberus Fossae graben system. There was apparently still volcanic activity there just 53,000 years ago.

Since there is no plate tectonics on Mars - unlike on Earth - "volcanism and tectonic activity on a cooled Mars is unexpected," say the two planetary researchers. In search of an explanation, Broquet and Andrews-Hanna constructed a detailed model of the region based on the surface texture, elevation profile, and gravity anomalies measured by spacecraft orbiting the red planet.

The researchers obtained the best agreement with all available data under the assumption that there is a massive mantle plume underneath the Elysium planitia. This is what geologists mean by a zone where hot rock flows up from a planet's deep mantle. When the rising rock meets the planet's solid outer shell - called the lithosphere - it spreads out and the plume takes on a mushroom-like shape. Such mantle plumes are also known from Earth and are the cause of "hotspot volcanism", which is not bound to the boundaries of continental plates.

The head of the plume beneath the Elysium Plane is about 4,000 kilometers in diameter, the researchers say, and is between 96 and 285 degrees warmer than surrounding rock. The center lies exactly under the Cerberus Fossae graben system and thus provides a natural explanation for the recent volcanism in the region, as well as for the marsquakes registered by "InSight", according to the researchers.

However, the discovery of such a plume raises questions about the geological development of our neighboring planet. Because the current global models of Mars only predict the slow mixing of the mantle rock by convection, but not the formation of plumes. "The evidence we found for an active, large mantle plume therefore poses a challenge to our understanding of the thermal evolution and internal dynamics of Mars," say Broquet and Andrews-Hanna.

‹ ›
Keywords:
MarsApple PodcastTexttospeechErklärungPlanetenWeltraumWeltraumforschungNature AstronomyVulkanismusInSightCerberus FossaeElysium Planitia
Your comment has been forwarded to the administrator for approval.×
Warning! Will constitute a criminal offense, illegal, threatening, offensive, insulting and swearing, derogatory, defamatory, vulgar, pornographic, indecent, personality rights, damaging or similar nature in the nature of all kinds of financial content, legal, criminal and administrative responsibility for the content of the sender member / members are belong.
Related News