Why does some species kill their young? 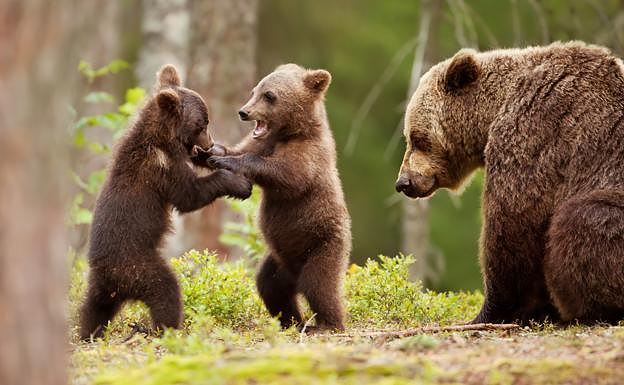 Two brown bears fought in a brutal fight in Palentina Mountain. The reason lies in mating and the elimination of potential rivals. Jose Maria Santiago Saez, a biologist from the Official College of Biologists of the Community of Madrid, explained that a male will kill off any offspring not of his choosing in order to remove the competition and allow the female to become fertile again to produce his offspring. This is what led to the viral scene. Scientists are not surprised by this brutality or the terrible end result.

Bears have devised defense strategies to protect their young and save the time they spent breeding them. One strategy is to set up camp in remote and steep areas where there is a low chance of another bear encountering you, like the boulder in the video. Another option is to fight, which also happens in this recording. A third factor is polyandry, which is when the females are extremely promiscuous and mate simultaneously with multiple males so that the latter, not knowing which ones they are, refrain from killing them." Fernando Ballesteros is the project coordinator for the Fundacion Oso Brown.

The 'infanticide of wild animals' is not only common in bears. It's also common in many other species such as felines, primates, and rodents. Santiago Saez explains that when a male lion seizes control of a pride, it is not uncommon for him to kill offspring who are not his to allow the females to have new cubs.

Although it may seem like the species is being boycotted, evolutionarily, it has been a successful system and is still in existence. Ballesteros says that if the cubs were killed, the probability of population growth would be reduced to serious limits. However, the reality is that small brown bear populations continue to grow each year, despite being subject to annual infanticides. .

It's a survival mechanism. Santiago Saez adds, "It is assumed the individuals who do this are most competitive, because they come to dominate the group and have therefore the best aptitudes for passing on the offspring to ensure that the species survives."

According to some studies, infanticide is more common in species where females can reproduce throughout the year than in species with a seasonal cycle. It may also be linked to species where a few males mate repeatedly with multiple females. Additionally, it could be caused by behavioral abnormalities of a diseased nature. In particular, infanticide is more common in animals that have many offspring or require less care from their mother. Santiago Saez says that the more time spent caring for children, the easier it will be to prey on young people.

‹ ›
Keywords:
InfanticidioAnimalEspeciesMatanCrias
Your comment has been forwarded to the administrator for approval.×
Warning! Will constitute a criminal offense, illegal, threatening, offensive, insulting and swearing, derogatory, defamatory, vulgar, pornographic, indecent, personality rights, damaging or similar nature in the nature of all kinds of financial content, legal, criminal and administrative responsibility for the content of the sender member / members are belong.
Related News