The south-eastern tip of the British mainland, the county of Kent, is closest to mainland Europe. 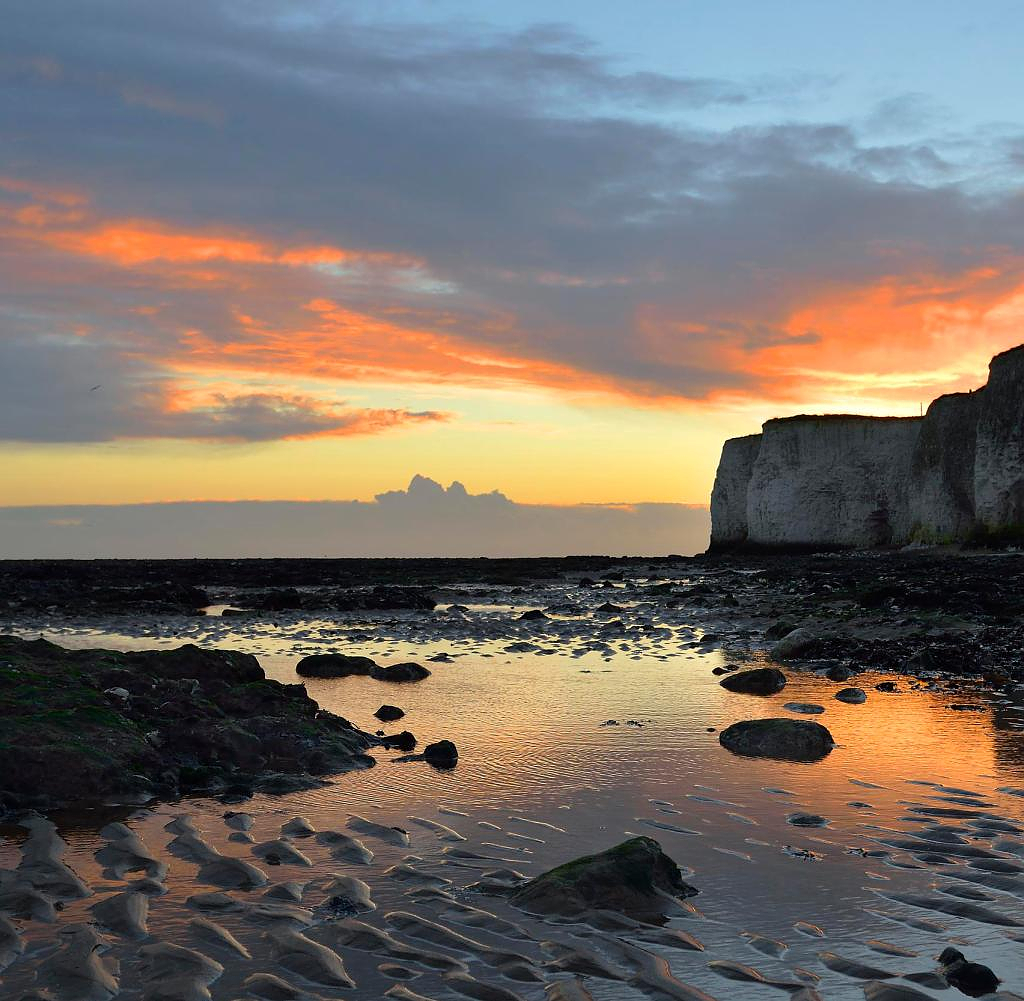 The south-eastern tip of the British mainland, the county of Kent, is closest to mainland Europe. If you stand on the white limestone cliffs, often topped with lush greenery, which rise up to 100 meters above the North Sea near Dover, you can see as far as France on a clear day. The Cap Gris-Nez on the other side of the English Channel is only about 34 kilometers away as the crow flies.

The straits have always been used by invaders, and in the Second World War Kent was particularly badly hit by airstrikes. Today, tourists travel to Kent via the short sea route or the Eurotunnel. The extreme south-east of the island is known as the Garden of England – orchards are in full bloom there in spring and summer. Many of these are surrounded by palaces and castles, including Sissinghurst Castle, whose herb garden is said to be the most biodiverse in England.

Gentle hills and peacefully nestled towns in between characterize the landscape; it is traversed by the Medway, which flows into the Thames. The recently deceased Queen Elizabeth II had a special relationship with Kent: in the early years of her marriage, she often stayed with Prince Philip at The Hatch Estate, a country home for relatives of the royal family. Later, the couple often took trips to Kent with Princess Anne and Prince Charles.

The county is also of particular importance because of the Canterbury Cathedral, a masterpiece of Romanesque and Gothic architecture, a place of pilgrimage and a World Heritage Site since 1988. Many travelers also visit the Historic Dockyards in Chatham - in the royal naval dockyard, which was used from 1586 to 1984, almost all the ships with which Great Britain founded its colonial empire were built.

The white cliffs of Dover in Kent are known far beyond the borders of Great Britain. But not even many Britons have heard of the chalk towers of Botany Bay on the Isle of Thanet.

The bay at the foot of the village of Broadstairs is particularly suitable for a variety of activities between the rock giants at low tide: when the sea is gone, ponds remain in the rocks - ideal for splashing around. Fossil hunters will also find what they are looking for at the edge of the sea.

The Isle of Thanet is no longer a real island due to silting up. Due to its proximity to the European continent, Thanet was where the Romans landed as invaders to conquer England in 55 BC.

Typically English: Even in the underground passages of Dover Castle there is a cozy tea room. This wasn't always the case, however, as England's largest 12th-century castle sits strategically on the English Channel and has endured several sieges throughout history. The tunnels and tunnels were not used for cozy get-togethers, but to protect the castle crew, for example during the Napoleonic Wars.

Around 1810, 2000 soldiers were billeted in the 15 meter deep tunnel system. During the Second World War, Britain's only underground barracks was used as a military hospital and command centre. Today, Dover Castle attracts half a million visitors a year.

The Gypsy Tart is a local delicacy in Kent. A discussion about whether the name is politically correct has not flared up in Britain so far - the name literally means gypsy cake. According to legend, the dessert was invented on the Isle of Sheppey in Kent by a woman who fed starving "gypsy children" with it.

In fact, the Gypsy Tart fills you up. Flour, butter, eggs are the ingredients for the shortcrust pastry, the filling is a mass of whipped condensed milk and sugar. In the 1960s and 1970s, the cake was often part of school lunches, and many bakeries still sell it today.

1698 – this year is mentioned in the history books when it comes to the history of beer in England: It was then that Britain’s oldest brewery, Shepherd Neame, officially started operations in Faversham in the north of Kent.

During two-hour tours, you can peek into mash tuns, sniff locally grown hops, and sample a variety of ales and lagers. Shepherd Neame is now the UK's largest independent family brewery, exporting to more than 35 countries and operating 300 pubs and hotels between London and the coast alongside the parent company.

The brewing history of the small town is even older - and female: Up until the 14th century, brewing beer there was the job of women, the so-called Alewives, who sold the brew they made at home right at the front door.

This is how Charles Dickens (1812-1870) spoke about Kent, which served as a source of inspiration for many of his world-famous works, including "Oliver Twist" or "A Christmas Carol". Born in the county of Hampshire, the writer, who analyzed Victorian society with subtlety, first spent his childhood in Sheerness on the Isle of Sheppey in north Kent.

The family later moved to Chatham, where Dickens' father worked for the Royal Navy as a dockyard payroll clerk. Dickens spent his later vacations in Broadstairs and wrote to “David Copperfield” there. Dickens spent his final years at Gad's Hill Place mansion in Higham.

‹ ›
Keywords:
EnglandGroßbritannienLänderporträtsRegionenporträtsLänderkunde (Kolumne)CharlesKentDickens
Your comment has been forwarded to the administrator for approval.×
Warning! Will constitute a criminal offense, illegal, threatening, offensive, insulting and swearing, derogatory, defamatory, vulgar, pornographic, indecent, personality rights, damaging or similar nature in the nature of all kinds of financial content, legal, criminal and administrative responsibility for the content of the sender member / members are belong.
Related News