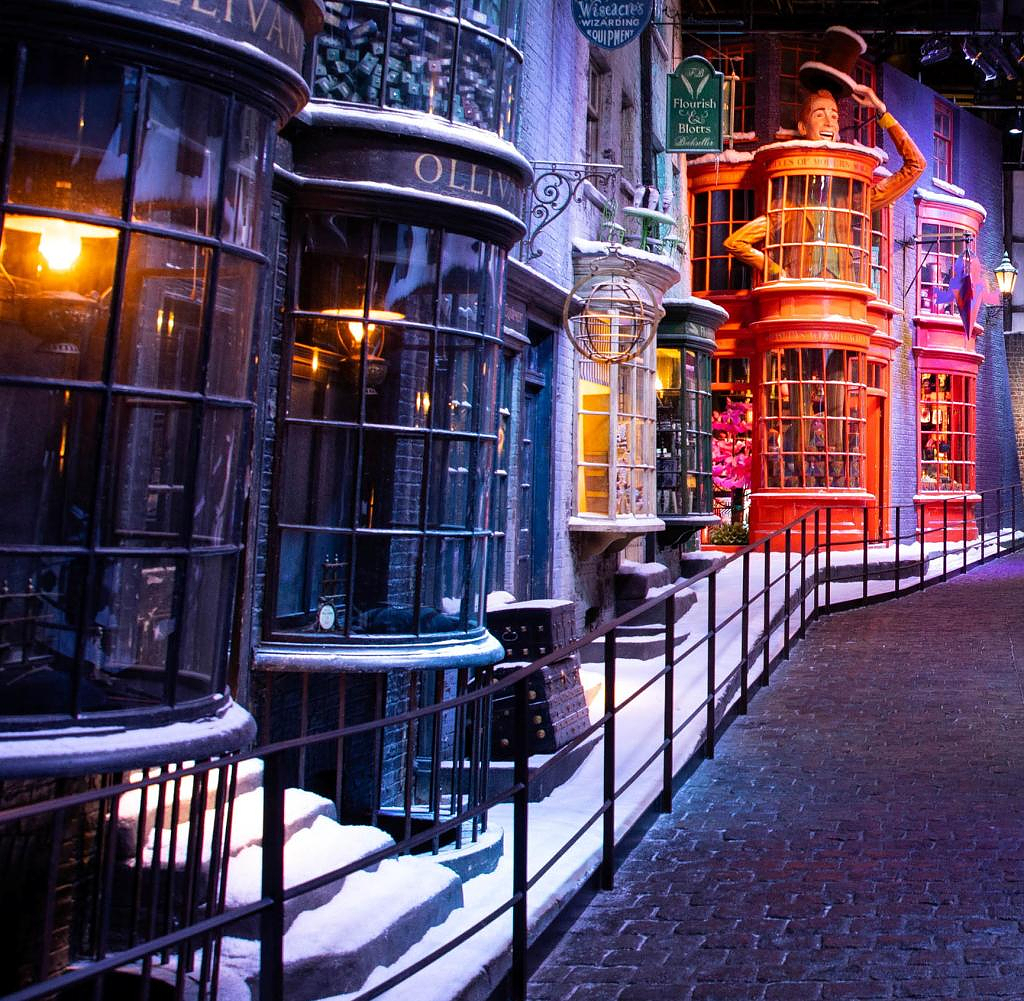 Meanwhile, the Great Hall has undergone a festive transformation. The endlessly long tables are set in style for the grand feast of roast turkey, bright green peas, cherry-studded ham and Christmas puddings, the rims of which are literally on fire.

In addition to decorated garlands and Christmas trees, the icicles hanging from the ceiling, a temple-like ice sculpture and an invisible orchestra with magical instruments complete the fascinating setting. Greetings from the legendary Yule Ball of the Triwizard Tournament. There's no question: "Hogwarts in the Snow" not only casts a spell over die-hard Harry Potter fans.

The Warner Bros. Studio Tour London presents a winter wonderland, based on the original Leavesden filming locations, that any Muggle – as non-magical people are called in the fantasy adventures created by J.K. Rowling – will inevitably be enchanted to behold. The sudden snowfall in the film studios on the former airfield site has long been a tradition.

During the shooting of the Harry Potter films, a member of the crew climbed onto a raised work platform and used a sieve to scatter a "snow mixture" of fine paper granules and grains of salt on the Hogwarts model by hand. With that, winter “officially” found its way into the huge halls of the film studio. Since then, the procedure has been repeated year after year on the former Harry Potter set.

“Snow is not just snow here. Depending on the scene, the artificial mixture sometimes had to crunch under your shoes when walking, sometimes float slowly through the air and then sparkle a little again in the light," says Evie Brown. In the same breath, the college student with long, straight hair, who works three times a week as a guide at Warner Bros. Studios, reveals that "after the winter season is over," it takes more than a week to painstakingly and carefully harvest the millions of snow chips small brooms and brushes to remove them from the scenes.

For Evie, it's more than a student job. With every word, with every smile, her infectious enthusiasm for the adventures of the magic student played by Daniel Radcliffe and the breathtaking film sets resonates. She chats happily and tells Potter fans (and those who want to become one) some open secrets from the film production.

For example, that the beds in the plump Gryffindor bedroom were built too small. Apparently, when the first film was released, no one thought that the teenage actors would get taller over time. "The beds didn't grow and the set couldn't be expanded," says Evie. Hence became Harry Potter

And other interesting details can be found out from Evie: Real hair wigs were made for every actor and his stunt double, so that after a possible break in shooting with a private visit to the hairdresser, the actors did not look any different in front of the camera. The half-giant Hagrid, played by Robbie Coltrane, received a special wig. His curly hair was made of yak fur and caused permanent itching for the actor, who died in October at the age of 72.

His role as the giant game warden and mentor to the wizard Harry Potter earned him a worldwide fan base. Hagrid actor Robbie Coltrane has died at the age of 72.

In the office of Dumbledore, the head of the Hogwarts School of Magic, there are also some peculiarities: Behind all the books on the shelves are actually discarded phone books with specially made book covers as a cover. All of the people in the paintings in Dumbledore's office are asleep as the setting has been prepared for night time. Only in one portrait did someone open their eyes.

Evie can also open the eyes of all muggles who are not so familiar with film techniques with a view of Harry Potter's magic cloak. "The cloak is green on the inside. That's the tone on the color scale that's furthest away from skin color," says the student, explaining how the magician's student was able to make himself invisible within seconds.

An effect that was also used in Quidditch. The performers sat on their broomsticks in front of a green background and simulated flight and play. The buildings and landscapes were then digitally added to the recordings afterwards. If you want, you can swing on a broom yourself in Leavesden and have your picture taken at Quidditch. Here, too, the green background is then replaced by an "original film scene".

Almost all of the sets and props seen on the Warner Bros. Studio Tour are actually from the shooting. It ranges from the Hogwarts Express to the room under the stairs where Harry Potter stayed in Part 1, to the three-story bus and the sky-blue Ford Anglia, 13 whole vehicles and a half of which were worn out for filming.

A replica, however, is the Forbidden Forest. "It wasn't used as a backdrop very often and was just too big to store away," Evie continues. The house of Potter's foster family is also not true to the original. In the film, little Harry grew up at 4 Privet Drive in the fictional British town of Little Whinging with Vernon and Petunia Dursley. In fact, the scenes were filmed at a private home at Picket 12 Post Close at Martin's Heron in Bracknell. Since the residential building was chronically besieged by Potter fans from all over the world after the film premiere, the "new building" on the studio site in Leavesden followed.

A special feature of the Potter set is undoubtedly the great love for even the smallest details. For example, 900 glasses were filled with strange things by hand especially for the setting of the laboratory in which the supposed magic potion was produced. In addition, a special magic book with "real formulas" was made.

Irrespective of this, the creators of the Harry Potter universe have perfectly understood how to create an illusion with magical radiance through a mixture of digital technology and magnificent backdrops. The marble in the imposing banking hall is really just an extremely elaborate wallpaper, the huge chandeliers are made of plastic parts.

"The goblets, plaques, coins and jewelry in the treasury are also all plastic," Evie says, laughing, knowing this was necessary to avoid injuring the actors who had to crawl over the treasury. She adds that all of the sets were first built to scale in miniature from white cardboard and then scanned with a lipstick-sized camera.

"Whatever didn't work out just never got built," Evie insists. While the exterior of Hogwarts was inspired by elements of the Universities of Oxford and Cambridge, Durham Cathedral and Alnwick Castle in northern England, great attention was paid to every little detail in the actors' appearance. It took Warwick Davis five hours to put on his masks. The actor, who is just 107 centimeters tall, not only mimed Professor Flitwick, a teacher at Hogwarts, but also the goblin Griphook as an employee in the magician's bank.

Also amusing is the fact that Arthur Weasley's cardigan, which was supposed to come from a used clothing collection, is from Versace. Evie always has more exciting knowledge to share about the Potter films. She could probably fill books as thick as J.K. Rowling's literary models with it. But now it's time for a hearty butter beer in the shade of platform 9¾ - because that's exactly what the original Potter feeling tastes like...

Entry: Since the British left the EU, a valid passport is again required to enter England.

How to get there: From London's Euston station, take the train (around 23 euros for a return journey) to Watford Junction station, from where you can take the free shuttle bus to the Warner Bros. Studio Tour.

Worth knowing: In addition to the Harry Potter world, Warner Bros. Studios London continues to be a film factory. The James Bond adventures “Goldeneye” and “Batman” were filmed here, among others. Current productions include “Fast

Tip: On December 13th, 14th and 15th, an exclusive dinner is offered in the Great Hall of Hogwarts. After enjoying food and drinks, there is then the opportunity to explore the snow-covered and then deserted studios on your own - including dessert on platform 9¾ and the obligatory glass of butterbeer. The cost of these special moments of pleasure is 260 British pounds, which corresponds to around 298 euros.

Accommodation: The Shendish Manor Hotel is located in an old manor house and is only a 15-minute drive from the studios. Double room with breakfast from the equivalent of 69 euros (shendish-manor.com).

Participation in the trip was supported by Warner Bros. Studio Tour London. You can find our standards of transparency and journalistic independence at axelspringer.com/de/Werte/downloads.

‹ ›
Keywords:
EnglandGroßbritannienLänderporträtsLondonStädteporträtsHarry PotterWarnerMediaDrehorte
Your comment has been forwarded to the administrator for approval.×
Warning! Will constitute a criminal offense, illegal, threatening, offensive, insulting and swearing, derogatory, defamatory, vulgar, pornographic, indecent, personality rights, damaging or similar nature in the nature of all kinds of financial content, legal, criminal and administrative responsibility for the content of the sender member / members are belong.
Related News