While the mullah regime puts down protests, an AfD clique promotes more trade

When MP Roger Beckamp entered the residence of the Iranian ambassador in Berlin's fashionable Dahlem district at the beginning of July, he had a map with him. 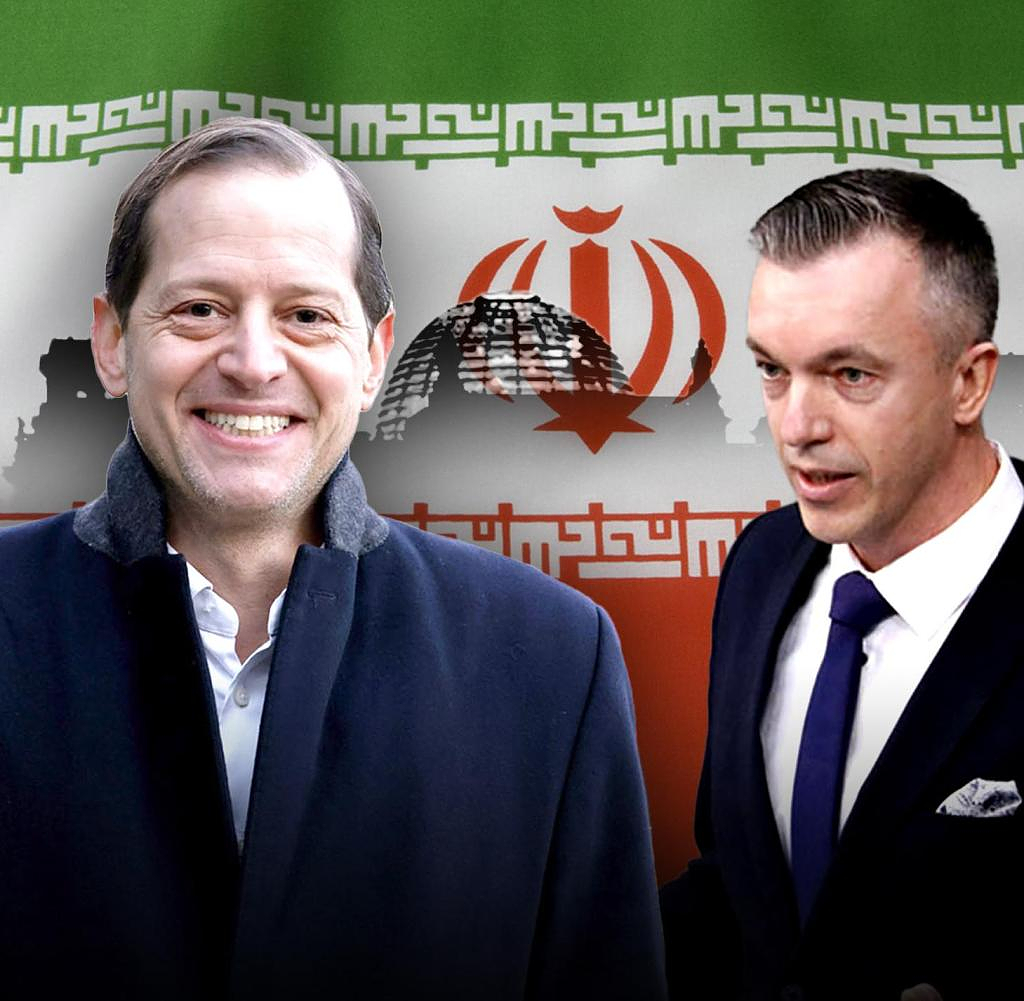 When MP Roger Beckamp entered the residence of the Iranian ambassador in Berlin's fashionable Dahlem district at the beginning of July, he had a map with him. It shows ancient Persia. The map comes from "Stielers Hand-Atlas", is more than a hundred years old, framed, copper engraving. According to a handwritten invoice from an antiquarian bookshop in Berlin-Mitte, 220 euros were paid for it. With this guest gift, it seems, the deputy puts all his energy into it.

The 47-year-old lawyer Beckamp was first elected to the Bundestag in 2021. There he sits on the far right, for the AfD. Beckamp is the chairman of the German-Iranian parliamentarian group, an association of MPs from several factions that is supposed to keep in touch with the Iranian parliament. That evening, the Iranian ambassador received an FDP man and a social democrat in the residence in addition to the AfD people. The temporary soldier Hannes Gnauck, who the military counter-intelligence service classifies as a right-wing extremist, is also present at the embassy in the evening. As chairman, Beckamp leads the conversation: It's about the nuclear agreement, trade with Iran and possible gas supplies.

Research by WELT shows that the AfD members from the group are using their positions to lobby for policies that are aligned with the mullah regime. Beckamp even spreads the President's propaganda without comment. This is causing unrest in the party, whose self-image includes being critical of Islam. Behind the scenes, a dispute over the direction of the attitude towards the regime has flared up.

This also has to do with the actions of the country. The theocracy promotes terrorism in the Middle East, works to develop nuclear weapons, threatens Israel with annihilation and oppresses its own population, especially women, religious, ethnic and sexual minorities and members of the opposition. "The Islamic terrorist state of Iran stands for everything we fight against," says Beatrix von Storch WELT, Vice President of the parliamentary group. That is "consensus in the AfD".

Beckamp, ​​on the other hand, is promoting closer cooperation – with this very state. Just a few days after meeting the ambassador, Beckamp made a request to the federal government. He inquired about Iran's role as an energy supplier. When the answer came, he issued a press release demanding that the government should work to get gas supplies out of the country. He acts together with Eugen Schmidt, the Iran rapporteur within the parliamentary group. The two men share a speaker, make inquiries and work on papers together.

Beckamp, ​​Schmidt, Gnauck - a clique has moved into the new AfD parliamentary group that wants to decisively shift the right-wing party's Iran policy. Schmidt wants this to be understood as a “necessary adjustment to the circumstances”. If you ask Gnauck about the bloody crackdown on the democratic protests in Iran that have been going on for weeks, he says that Germany should "take on a neutral role". "We shouldn't take sides and take sides."

The honorary chairman Alexander Gauland, whose word carries a lot of weight in the parliamentary group, also supports the group. In internal discussions, according to WELT information, he speaks out for their concerns. In further inquiries this year, Beckamp and Schmidt inquired about German-Iranian economic relations, "ensuring German-Iranian trade" and the nuclear agreement. Gauland also signed one of them.

In August, Schmidt declared that an "Iran policy in German interests" was needed. Beckamp makes it clear what this looks like on Twitter at the end of August. There he writes that the nuclear agreement with Iran is within reach, to Germany's advantage: "I just hope the Saudis and Israel don't ignite again." In September, he followed up in an interview with a portal of the Bundestag. There he says that Iran is unilaterally described as a "rogue state". However, he has the impression "that the USA, Saudi Arabia and Israel in particular pose a threat to peace in the region in many respects". In an answer to a citizen inquiry, he writes that one should no longer carry "the wrong song about the 'Axis of Evil'".

In an interview, Beckamp says he condemns “the American policy of intervention”. The German government has no Iran policy. "It always works like this: The Americans say something and then we just join in," he says. Beckamp, ​​who is actually responsible for building and housing, has often made a name for himself with excursions into foreign policy. In 2017 he traveled as a member of the state parliament to the Crimea peninsula, which was occupied by Russia and annexed in violation of international law. He told a Russian-language news portal in 2019 that Russia was pursuing the right policy in Syria. He traveled there in May 2022 and afterwards declared that there was peace in large parts of the country. In 2017, a Turkish-language medium wanted to know his basic position on arms deliveries. To which Beckamp replied that he would not supply arms to Saudi Arabia, but "rather to Iran". When asked about this, he refrained from doing so today and said that weapons should not be supplied to anyone in the region.

At the beginning of October, Beckamp spreads propaganda of the regime in the Bundestag. He has an e-mail sent to the German-Iranian parliamentary group in his name. It states that he invited the embassy to comment on the current domestic political situation. They then sent Beckamp a document, which Beckamp passed on to the MPs “for your knowledge”. This is an interview with Iranian President Ebrahim Raisi. The entire Iranian people believe that any riot would lead to an attack on people's lives and property, Raisi said in the statement. "Everyone is convinced that today the enemies of the Islamic revolution want to use this wave to pursue their goals."

Beckamp does not comment further on this propaganda. He does not catch up with other statements, for example from an opposition force. Confronted with this, he says he is "not a voicer of government positions". "But what I get, I pass on."

Within the AfD parliamentary group, the activities of the clique around Beckamp are met with great suspicion. Finally, the party takes up the cause of criticism of Islam and warns of the growing influence of Islamists. Gauland tries to explain this contradiction: "Islam and Islamism are not part of Germany, but of course part of many other countries," he told WELT, "We don't have to intervene or take a counter-position directly in these countries."

At a semi-public event, it becomes clear that not everyone sees it that way. On November 9, Jürgen Braun, the parliamentary group's human rights policy spokesman, invites you to an event on the protests in Iran in the German Bundestag. Almost all members of parliament and employees of the AfD are sitting in the hall, and there was no public advertising for the event. Several speakers of Iranian origin harshly demanded an end to all German-Iranian cooperation. Flights should be stopped, diplomats expelled.

Braun told WELT that German interests are always a weighty argument. However, it is absurd to want to buy from the mullahs' regime just when it is taking "particularly brutal" action against its critics. And Beckamp? Talks about the “courage of the Iranians” this evening. It sounds as if the AfD is joining forces to promote tougher dealings with Iran. But what Iran policy should look like continues to be bitterly debated away from the public.

Berliners show solidarity with the victims of the Iranian government at the East Side Gallery. Meanwhile, the mullahs' regime, which is coming under increasing pressure about two months after Mahsa Mini's death, is resorting to increasingly brutal means.

According to WELT information, two competing applications to Iran were under discussion, one from the Human Rights Working Group, the other from Schmidt and Beckamp, ​​supported by Gauland, for example. They contain conflicting proposals: The first motion calls for the exit from the talks for a nuclear deal and for sanctions to be imposed on the Iranian Revolutionary Guard. The second, on the other hand, calls on the federal government to increase its commitment to the nuclear agreement. The applicants are also promoting German-Iranian town twinning and a celebration of the 150th anniversary of the German-Persian friendship treaty next year.

There was no vote. The parliamentary group board decided before the debate not to submit either of the two motions to the Bundestag. Group leader Tino Chrupalla told WELT beforehand: "We do not interfere in the internal affairs of other countries, not even in Iran." It seems as if the leadership does not want to side with the argument in the group. And so Beckamp and his people can continue.

‹ ›
Keywords:
NabertAlexanderSchindlerFrederikInvestigationAfDIranIslamGasRechtsextremismusTexttospeechRoger BeckampBundestagEugen SchmidtDahlemPersienHannes GnauckBonnTeheranIsraelBundeswehrNorth DomHöxterBeckamp PropagandaQatarTwitterRusslandStorch WELTBruchsalHammerschmidtPolitikIranPolitikGaslieferung
Your comment has been forwarded to the administrator for approval.×
Warning! Will constitute a criminal offense, illegal, threatening, offensive, insulting and swearing, derogatory, defamatory, vulgar, pornographic, indecent, personality rights, damaging or similar nature in the nature of all kinds of financial content, legal, criminal and administrative responsibility for the content of the sender member / members are belong.
Related News