When the polar bear finds himself far from his pack ice

In Hudson Bay in northern Canada, in midsummer, the last bits of ice are like confetti in the blue vastness. 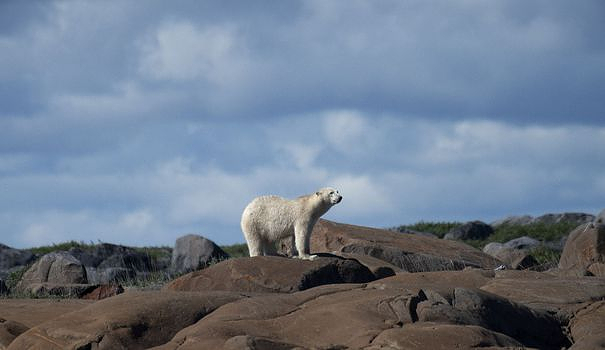 In Hudson Bay in northern Canada, in midsummer, the last bits of ice are like confetti in the blue vastness. Around, the coast is almost flat, made of rocks, tall grasses, in particular willowherbs with purple flowers, and skinny trees that struggle to grow with the wind.

This is a critical time for bears in the region. Every year, from the end of June when the ice disappears, they are forced to settle on this shore and begin a period of fasting, which is increasingly long and dangerous for them.

This American comes several weeks a year to Churchill, a locality at the gateway to the Arctic in the Canadian province of Manitoba, to follow the evolution of the endangered animal.

Here, it can be seen more easily than elsewhere on the pack ice, by borrowing all-terrain vehicles adapted to the tundra or zodiacs in Hudson Bay. It was during one of these expeditions that an AFP team was able to accompany Geoff York in early August.

Near the impressive male basking in the sun, a remnant of bone. But nothing that does not satisfy this animal of about 3.5 meters for some 600 kilos.

"In some places, they may find a beluga whale carcass or a careless seal near the shore, but most of the time they fast and lose around a kilo a day", continues the scientist.

In the Arctic, global warming is three times faster than elsewhere in the world, or even four times according to the most recent studies. Gradually the pack ice, habitat of the polar bear, disappears.

According to a report published in Nature Climate Change in 2020, this could mark the virtual extinction of this emblematic animal: from 1,200 individuals in the 1980s, the population of polar bears in western Hudson Bay has increased to about 800 today.

In summer, the pack ice begins to melt earlier and earlier and winter glaciation occurs later: their entire annual rhythm is called into question by the effects of global warming.

The possibility of accumulating reserves of fat - and calories - before the summer hunger period is reduced.

The polar bear - also called Ursus maritimus - is a meticulous carnivore, which feeds mainly on the white blubber that envelops the bodies of seals.

But now, in the summer, this Arctic superpredator sometimes comes to eat algae. Like this mother and her cub, seen not far from the port of Churchill, which calls itself the "polar bear capital".

The limit outside the ice "for females, responsible for feeding their young who are breastfed until the age of two, is around 117 days" against 180 for males, details the American Steve Amstrup, scientist Chief of PBI.

So, births drop and it is increasingly rare for females to give birth to three young, as was often the case before.

A whole world in decline that Geoff York, 54, knows by heart after more than 20 years surveying the Arctic for the environmental organization WWF and then PBI.

In Alaska, for example, where he kept the tenacious memory of fangs planted in his leg during a capture. Or when he came face to face with a female in a den he thought was empty. This calm man shouted that day "louder than ever" in his life.

Today, however, the polar bear is a colossus with feet of clay.

In Hudson Bay, "polar bears now stay on land on average one month longer than their parents or grandparents".

"This pushes them, when they become physically weak, to take more risks to find food, including getting closer to humans."

In this locality of 800 inhabitants, inaccessible by car, the bears had taken the habit a few years ago of frequenting the waste collection center, an easy - but harmful - food source for them.

They could be seen shredding trash bags, eating plastic, or getting their noses stuck in tin cans amid burning garbage.

Since then, precautions have been taken. The dump is one of the best guarded places with cameras, fences and patrols.

Everywhere in the city, doors of cars and houses remain open in case you have to take refuge there after a bad encounter with the largest terrestrial carnivore.

And here, on all the walls, is the emergency number to reach Ian or his colleagues.

When the alert phone rings, they enter the scene, jump into their pick-up armed with a rifle and a spray can of repellent, bulletproof vest on their back. Ian Van Nest, thirty-something with a fine beard, takes very seriously his role, which has become crucial with the proliferation of plantigrades around the city.

"Sometimes you have to stun the bear, sometimes you just have to honk your horn," the father told AFP during an inspection. "If we have to get out of the car, we use deterrent bullets. We shoot next to him, we don't want to hurt him."

Some areas are more closely monitored, especially around the school in the morning before the doors open "to be sure that families are quiet on the way".

Last bad memory: in 2013, when a woman was seriously injured by a bear in front of her home, narrowly saved by her neighbor who came out in pajamas armed with his snow shovel.

Sometimes the animal must be captured and then airlifted further north or placed behind bars until winter.

Churchill's only jail is for bears: 28 cells, sometimes full in the fall when bears roam en masse around town waiting for the ice to reform in November.

- "Air conditioning of the planet" -

The case of the polar bear should alarm us because the Arctic is a good "barometer", notes Flavio Lehner, professor of earth and atmospheric sciences at American Cornell University, also on the expedition.

Since the 1980s, sea ice has shrunk nearly 50% in the summer according to the National Snow And Ice Data Center.

“We are seeing some of the most significant changes here” in the world, says the Swiss scientist.

This region is essential on a larger scale because "it's kind of the air conditioning of the planet thanks to this important feedback mechanism of sea ice and snow in general", of which the white mirror returns 80% radiation from the sun thus cooling it, he explains.

When the Arctic loses this reflective capacity it has consequences for global temperature as a whole.

Thus, when the sea ice melts, the much darker ocean surface that replaces it absorbs 80% of the sun's radiation, accelerating the warming, continues Flavio Lehner.

A few years ago, scientists feared that the Arctic summer sea ice would quickly reach a climatic "tipping point" and disappear permanently above a certain temperature.

The latest studies show that the phenomenon is reversible. "If we ever manage to bring the temperatures down again, the sea ice will come back," says the scientist.

Nevertheless, in the region, today "all ecosystems, without exception, are affected" by the effects of global warming, explains Jane Waterman, a biologist at the University of Manitoba.

Permafrost - ground that remains permanently frozen for two years in a row - has started to melt and in Churchill the contours of landscapes have already shifted, damaging railway tracks and wildlife habitat.

The whole food chain is threatened, with also the appearance of other animals such as red foxes or wolves which endanger Arctic species.

According to the Canadian scientist, from viruses and bacteria to whales, "nothing is spared from change".

Not even belugas which in the summer, by the tens of thousands, migrate from arctic waters to find refuge in Hudson Bay. These little white whales are everywhere you look in this blue immensity.

Advancing in small groups, in an incessant broom, they like to follow the boats of scientists who have come to study them, seeming to take pleasure in showing off their large round heads and breathing a few centimeters from the observers.

The smaller ones, gray in color, lean on the backs of their mothers in this estuary with relatively warmer waters where they can protect themselves from killer whales and find abundant food.

But more generally in "certain areas of the Arctic, the beluga no longer has as many prey at its disposal" as before, explains Valeria Vergara, an Argentinian researcher who has devoted her life to studying these whales.

“The absence of sea ice prevents phytoplankton from surviving and therefore from feeding zooplankton, which feeds large fish,” explains the scientist from the Raincoast Conservation Foundation. Belugas have to dive much deeper to find their food, which takes more energy.

And in Hudson Bay, a new danger awaits them: some climate models predict that from 2030, with the reduction of the sea ice, ships could navigate there all year round.

However, noise pollution is a major issue for the species, nicknamed "sea canaries" as their communication is developed (hissing, snapping, ringing...). They "rely on sound to communicate but also locate themselves, find their way, food...", explains Valeria Vergara.

Thanks to the boat's hydrophone, the "Beluga Boat", conversations from the depths come to the surface. The 53-year-old researcher is able to recognize in particular the cries of mothers to maintain contact with their young.

For a novice ear, it is a surprising and cacophonous ensemble. A bustling community no doubt. But until when, the scientists are alarmed.

Very far from the pack ice, this summer we saw a beluga in the Seine in France and in May a polar bear in southern Canada.