Until recently, they covered the distance on foot. 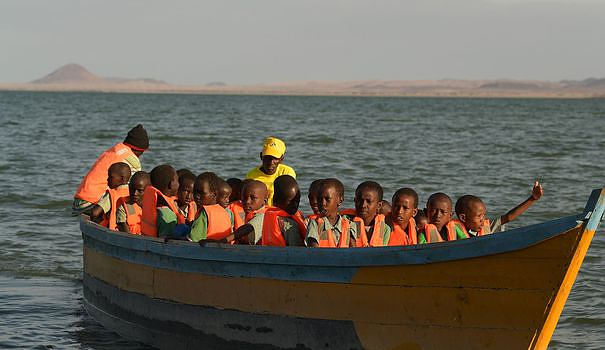 Until recently, they covered the distance on foot. A road connected their tiny village to the world, a lifeline for this ancestral community of fishermen and artisans living on the shores of the largest desert lake in the world.

But three years ago, the emerald waters began lapping at the circular huts, then rising, reaching levels never seen in living memory.

The area of ​​Lake Turkana, considered one of the cradles of mankind, extends over 250 km long and 60 wide in northern Kenya. However, it increased by 10% between 2010 and 2020, according to a government study published last year, and nearly 800 km2 of land have been swallowed up.

Several factors explain this phenomenon: extreme precipitation on the watersheds, linked to global warming, increased runoff from the soil linked to deforestation and agriculture, but also tectonic movements.

The El-Molo saw their only freshwater pipeline disappear, as did the burial mounds of their ancestors. The waters even ended up closing in on the road, isolating the inhabitants on an island in the middle of the lake.

"Before, there was never any water here. You could drive a jeep through it," says Julius Akolong, as he crosses the wide channel that now separates his community from the rest of northern Kenya.

Trapped by the waters of the lake, sometimes called the "jade sea", the El-Molo community found itself deeply affected, as its unique heritage was already under threat.

They were barely 1,100 according to the last census of 2019, a drop of water among the 50 million inhabitants and more than 40 ethnic groups in the country.

Known as "those who eat fish" by the herding tribes of northern Kenya, the El-Molo are said to have migrated around a millennium BC from Ethiopia to Turkana.

Today, few speak their ancestral language. Over generations and marriages with neighboring tribes, customs have evolved or disappeared. The unexpected rise of the lake fragmented the rest.

Some of the displaced have made the heartbreaking decision to erect a makeshift camp on the opposite shore: shacks set in a barren, windswept glade. The school is certainly closer, but the world of their community more distant.

"It was very difficult. (...) We had to discuss it with the elders so that they gave us their permission or their blessing to leave without curses", says Akolong, 39 years old and father of two children.

For those who stayed, life on the island turned into a battle.

No longer able to access fresh water, the El-Molo were forced to drink water from the Turkana, the saltiest lake in Africa. The ailments - dental, capillary - followed.

"We often have diarrhea (...) we have no other drinking water. That's all we have. It's salty and damages our teeth and hair," says Anjela Lenapir, 31, mother of three children.

Children were otherwise penalized. Most of them are stuck at home, deprived of school because their parents cannot pay for transport on the fishing boat, deplores David Lesas, deputy director of the primary school in El-Molo Bay.

The local government and the NGO World Vision are helping, but resources are scarce and needs are many in this severe drought-stricken region.

The school fence and the toilet block are under water, crocodiles have invaded part of the playground.

But the real damage to El-Molo is indelible.

Separated from its people, Akolong has missed the initiation rites, baptism ceremonies and funerals that reinforce tribal identity and community.

"We are now divided," he blurts bitterly.

The cairns materializing the tombs of the ancients have been swept away, and with them the memories of the past. The lake also threatens the revered shrines of tribal deities.

“It is a place that is deeply respected in our culture,” Lenapir points out: “With the rising waters, we will also lose this tradition.”