When it comes down to it, there is a cook and a waiter in the coalition

For weeks, the future of nuclear power plants in Germany had been wrestled with. 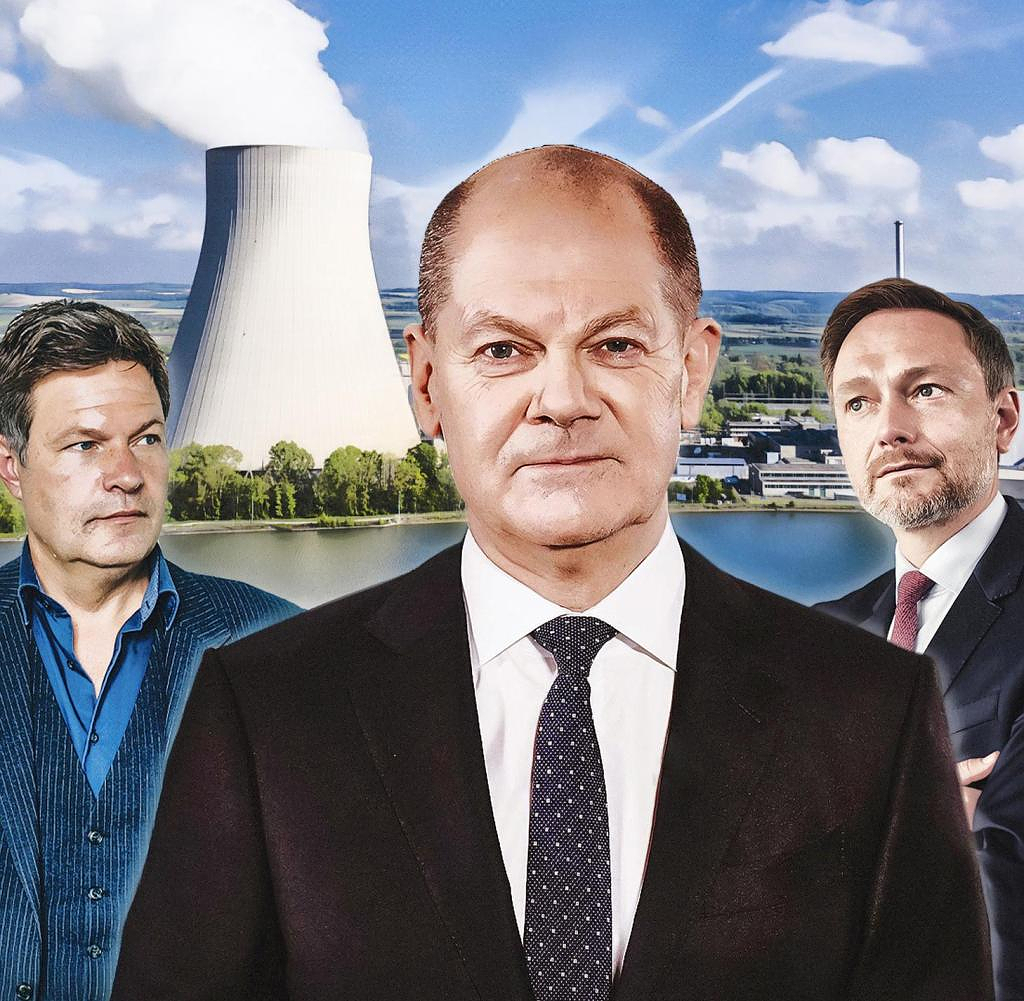 For weeks, the future of nuclear power plants in Germany had been wrestled with. The state, the Bundestag and, last but not least, the traffic light coalition in Berlin debated whether and, if so, for how long the last three reactors in the state should remain connected to the grid in view of the threat of high electricity prices after the decision to phase them out at the end of the year. Now there is a decision.

One in which it has obviously succeeded that all sides can somehow see themselves as winners. And one very special. However, there is also a loser.

The winner of this tug of war is Olaf Scholz, the Federal Chancellor. He has provided the leadership that is always demanded of him and that many miss. He abandoned the postulate of “equal rights in the coalition” for the moment and decided that all three nuclear power plants that are still operational, Isar 2 (Bavaria), Neckarwestheim 2 (Baden-Württemberg) and Emsland, will continue to operate “until April 15, 2023 at the latest”. be able.

Scholz did not, as usual, declare that the federal government had decided something. Or the traffic light coalition. The letter from the Chancellor's Office, which was sent late Monday afternoon, addressed the cabinet colleagues: "As Federal Chancellor, I... made the following decision...", namely to create the legal basis for the continued operation of the kiln. That doesn't just sound confident. That's it.

Scholz has found the overdue compromise that his coalition partners, the Greens and the FDP, were unable to reach. He made use of his policy competence as chancellor and referred to the rules of procedure of the federal government, which says at the beginning: "In cases of doubt, the decision of the chancellor must be obtained." Scholz made his sentence from the Hamburg days true, according to which the leadership gets who orders them. That took long enough.

After a long debate, the Greens and the FDP had increasingly gotten caught up in the question of whether the nuclear power plants should continue to operate. The Greens, with their roots as an anti-nuclear party, actually wanted to stick to the exit decision at the end of the year. At best, Isar 2 and Neckarwestheim 2 should be able to remain online until mid-April 2023. That was again underpinned and decided at the party conference in Bonn from Friday to Sunday. The FDP wanted all three remaining nuclear power plants to remain connected to the grid for as long as possible. The CDU and CSU wanted that too.

Now the Greens can explain that the final phasing out of nuclear power in Germany was only delayed by a few weeks in an emergency. The “phasing out of phasing out nuclear energy” feared by the Greens will not happen. However, the Greens also had to swallow several downers. And the FDP can claim that the nuclear power plants can run longer at all. If FDP leader Christian Lindner hadn't constantly pushed the coalition partners in front of him on this point, the reactors would probably all have gone offline on December 31st.

Lindner will refer to this if there is a shortage of electricity in winter and the price goes unpaid. The Union will too. Above all, Bavaria's Prime Minister Markus Söder (CSU), who had fought like a lion for the continued operation of Isar 2.

And the SPD? Was in line with the Greens in terms of content. Otherwise, the comrades are relieved that it was the chancellor who spoke the word of power. When it comes down to it, there are cooks and waiters in the coalition, to take up the bon mot of former Chancellor Gerhard Schröder (SPD).

"It depends on the chancellor," the Social Democrats in Berlin like to say when asked about the poor performance of their federal ministers and the poor poll numbers. "The Chancellor is using his policy competence and is presenting an appropriate, pragmatic solution for nuclear power," tweeted the First Parliamentary Secretary of the SPD parliamentary group, Katja Mast, as soon as the Chancellor's decision was public. Translated to the address of the Greens and FDP: If it matters, we'll tell you how it's going. With that, everything has been said for the SPD for the time being.

However, the Social Democrats now have a problem: a regional one. In Lower Saxony, the electorate was promised by the party and the old and probably new SPD prime minister Stephan Weil during the election campaign that the Emsland nuclear power plant would no longer remain in operation. The Greens were also involved in the election campaign. Now things are different. That should upset some who voted for red-green in the recent state elections. Election winner Weil and his Green coalition partners now have to take the rap. But the real losers are the voters. They had been promised what will now probably not be kept.

And so the chaos in Lower Saxony after the Scholz decision was great. In particular, the Lower Saxony Greens, who had repeatedly explained in numerous interviews and TV debates how superfluous and almost counterproductive it would be to continue operating the system, first had to sort themselves out comprehensively. An initially announced statement by the top candidate Julia Willie Hamburg on the Chancellor's decision was finally postponed to Tuesday in the evening, with reference to the fact that committee discussions were still pending.

Weil finally said in the evening: "If the federal government, contrary to its original assessment, is convinced that the Emsland nuclear power plant will also be needed by mid-April, we will create the necessary conditions for this at state level in Lower Saxony." His SPD environment minister, Olaf Lies, added but: "The Emsland nuclear power plant will not make any real contribution to solving the current challenges."

Despite the current misery in Hanover, Scholz gave his word of power at a tactically favorable time for himself and the SPD. He only made the decision after the Lower Saxony elections – and in the end, Stephan Weil in particular benefited from the way he did it. Because the end of Emsland that had been promised up until then certainly appealed to many voters and drew them to the side of the SPD.

In addition, Scholz waited until after the Green Party Congress in Bonn to make his decision. If the chancellor had intervened earlier, that would have determined the delegates' meeting and economics minister Robert Habeck could have come under massive pressure. So the cliff was circumnavigated and Habeck can now say: I and my party wanted it differently. The chancellor has decided that the Emsland nuclear power plant will continue to operate, he must be responsible for it.

The FDP was satisfied with Scholz's word of power and emphasized its role as a driving force. The Chancellor's proposal finds "the full support of the Free Democrats," wrote FDP leader Christian Lindner on Twitter: "It is in the vital interest of our country and its economy that we receive all energy production capacities this winter." Further use of the Emsland nuclear power plant is an important contribution to grid stability, electricity costs and climate protection. The task now is to get the legal foundations in place as quickly as possible. Lindner further promised that the government would “work out viable solutions together for the winter of 2023/2024”.

With a word of authority, Chancellor Scholz lets three nuclear power plants run longer. In doing so, he draws on his authority to set guidelines. "It is important that we first get through this winter," said Lukas Köhler (FDP), deputy parliamentary group leader.

The parliamentary group welcomed the decision as "an important signal for the people and companies in Germany", as parliamentary group leader Christian Dürr said at a press conference called at short notice. The statement is clear: “We use all the capacities that we have in Germany to relieve people and companies. And it is also an important signal for European solidarity, because we will be dependent on it in winter.”

The parliamentary group leader responsible for energy policy, Lukas Köhler, spoke of an "absolutely necessary and correct step that does not solve all energy problems, but prevents us from creating new ones unnecessarily". The FDP's efforts have paid off.

However, it also seems clear that the topic is by no means settled from the point of view of the liberals. Member of Parliament Frank Schäffler called the decision just a first step. "Finally, the Chancellor has spoken a word of power on the green attitude of refusal," said Schäffler WELT. "However, the high electricity prices will remain, so that there is no way around a longer term beyond the spring."

And the topic is by no means off the table for the Greens either. Top Greens emphasized that you can live well with the result. As decided at the party congress, the reactors will be taken off the grid in mid-April and no new fuel rods will be bought. Germany's final phase-out of nuclear power has only been postponed by a little more than a quarter. Except that three nuclear power plants will continue to run until then. "One had to die" to reach a compromise with the FDP. If you believe the SPD, the fuel rods at the Emsland nuclear power plant have burned down so much that it has to be taken off the grid very quickly.

But: In the end, as the draft law looks like so far, it will be the responsible minister who decides which nuclear reactors actually go from the reserve to extended operation, i.e. use at half power. And this is Robert Habeck. He thus occupies a crucial position.

They would have liked to present it as a solution themselves, not through a word of authority from the chancellor. But the pressure from the party and faction to leave only two nuclear power plants on the grid made it necessary for Scholz to intervene. So Robert Habeck cannot be really happy with the decision. And the old Green Jürgen Trittin is obviously not either.

So it could be that Habeck has yet to catch his party in the upcoming proceedings to change the Atomic Energy Act. That would drag the process. The opposition will see to that too. “This word of power from the Federal Chancellor was probably necessary to get the traffic lights on track. Nevertheless, this decision falls short," said Friedrich Merz, parliamentary group leader of the Union in the Bundestag and CDU federal chairman, WELT. "The German nuclear power plants must - as the FDP has demanded - continue to run with new fuel rods until 2024".

CSU General Secretary Martin Huber chose an even sharper formulation than Merz: "This is not a compromise, but a declaration of bankruptcy by the traffic light and the FDP," he told WELT. "The danger of a blackout next year remains". So there will still be heated debates in the Bundestag about the end of German nuclear power plants. According to the saying of the SPD politician Peter Struck: "No law comes out of Parliament the way it was introduced."