"When I became a correspondent, intelligence officials questioned me" 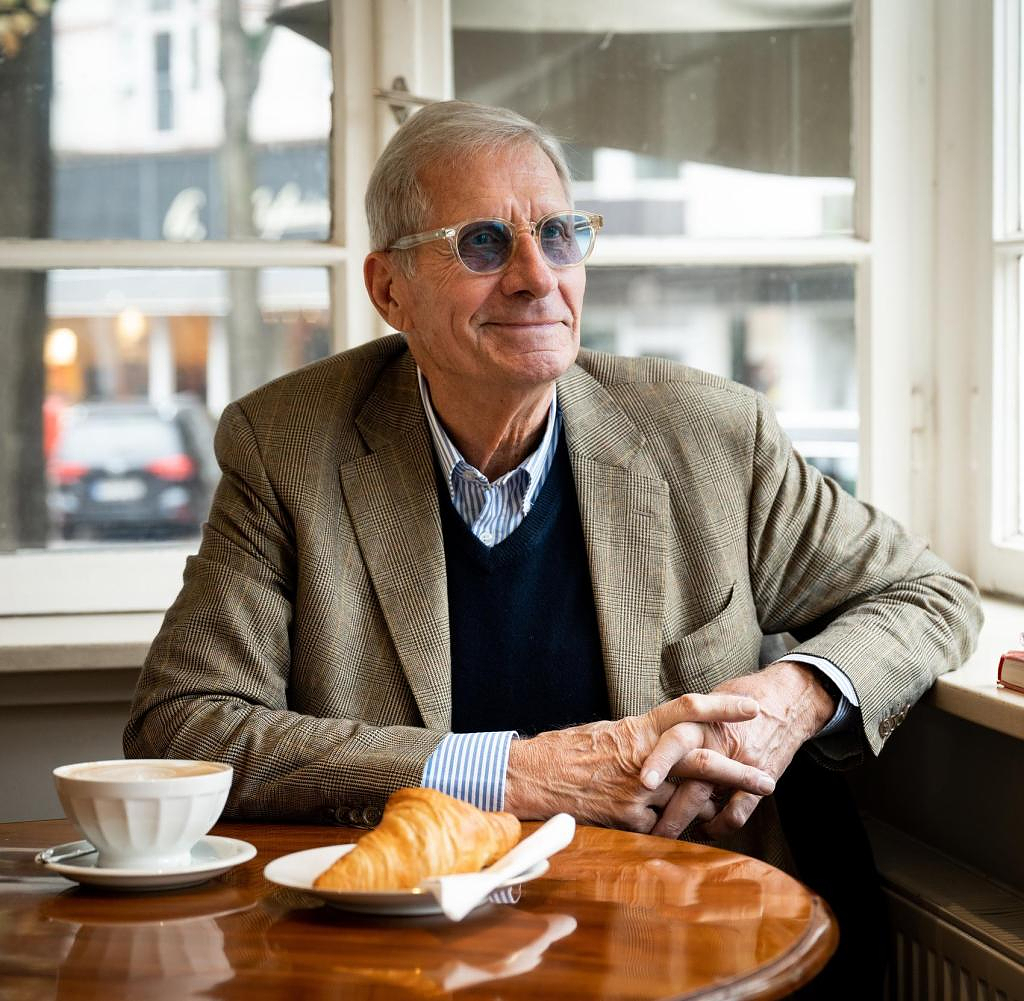 WELT AM SONNTAG: Mr. Wickert, you will be 80 on December 2nd, but you are very busy as an author. A contradiction?

Ulrich Wickert: Birthdays come and go, that's how I see it. There are much more important things for me, such as the crime thriller "The Shadows of Paris" that I just wrote and other book projects.

WELT AM SONNTAG: Are you celebrating a big birthday?

Wickert: In the family.

WELT AM SONNTAG: Is your 80th birthday an occasion for you to look back?

Wickert: I always look ahead. This is probably also due to the fact that I have been lucky in my life and have always been able to follow my motto in life: "Never lose sight of desire". Of course I've also had to do things in my professional life that were part of the obligatory program, but basically I've always decided based on what I enjoy.

WELT AM SONNTAG: Can you think of such a course in your life?

Wickert: When I was in my mid-30s, I got the offer to succeed the legendary Gert von Paczensky, TV editor-in-chief in Bremen. But when my director Hübner at WDR asked me "When are you leaving?" I replied "What does my future at WDR look like?"

He offered me the job of New York correspondent a year later. That's how it happened. That was an extremely important decision for me, because when I was later offered another position in the hierarchy, I knew: I don't want it, I want to get to know people in the journalistic profession and learn something through what I do. I still do today.

WELT AM SONNTAG: But now you have fewer duties …

Wickert: I don't have any compulsory tasks at all, which is of course wonderful. But when I write a thriller, I've been working on it for a year. Of course, if it's going to be good, I have a commitment: to research, to think, to plane, to file and to work.

WELT AM SONNTAG: You are also present in the media, appear on talk shows – how do you manage that in addition to the family?

Wickert: The family is the most important thing. And appearances on television don't take that much time: you go to the studio, try to be friendly and polite in the talk and that's fine too. Then you sit down at your desk again the next day and continue writing.

WELT AM SONNTAG: Are you an early riser?

Wickert: I get up early, have breakfast with the family, the children go to school. Then I first read half a dozen newspapers, which has been both a duty and a pleasure for me for decades, and then around ten I climb into my study and start to write. I don't stay there longer than half past five. Some people ask: will my thoughts come to me over a bottle of red wine in the evening... No. If you write like that, it becomes horrible.

WELT AM SONNTAG: Your new thriller is not only a political and agent thriller, but also a restaurant guide for the greater Paris area.

Wickert: I try to include French life. In everyday French life, communication always takes place while eating, which is why President Sarkozy has succeeded in having French cuisine declared a World Heritage Site. When I came to Paris, as a correspondent, I learned how important it is to go out to eat with people in order to make and maintain good contacts.

WELT AM SONNTAG: That's probably why a lot is eaten in the novel.

Wickert: Yes, that's why my hero, the examining magistrate Jacques Ricou, and his friend, the detective inspector Jean Mahon, constantly go to the bistro for working lunches, where they exchange information. When Jacques wants to start talking right away, Jean says, "Calm down, don't we want to choose what we're going to eat first?". The French don't start talking about what it's really about until the end of the main course at the earliest.

WELT AM SONNTAG: In the novel, political backgrounds are told, scandals of convicted presidents. With true core?

Wickert: They are all true.

WELT AM SONNTAG: That goes as far as secret service backgrounds, do you have contacts there?

Wickert: That has been researched and is true, right down to the insanity about the almost unbelievable origin of the French secret service's black coffers. When I first became a correspondent in France in 1978, two gentlemen from the Ministry of the Interior called me in for an interview. They took me to the bistro, where else, and asked me about my whole life and thinking, of course they were secret service people. That's how every newcomer was checked back then.

WELT AM SONNTAG: Why do you write so laconic?

Wickert: Because I think that's how the story progresses quickly and entertainingly.

WELT AM SONNTAG: How did you come to write crime novels?

Wickert: I always wanted to write crime novels, even before I became a journalist. In Germany, in the 1950s, people read Edgar Wallace and Agatha Christie. Boring! I was very lucky to get a Fulbright scholarship in America in the 1960s. There I read Raymond Chandler, Ross Macdonald, Dashiell Hammett. That was something completely new for me. Very exciting. To me, Chandler is literature. And I thought: man, that's how you want to write.

WELT AM SONNTAG: The wish is understandable.

Wickert: There's a big difference between wanting and being able, I never dared. But it didn't let go of me. I wrote my first non-fiction book, my second non-fiction book. Suddenly I had an idea for the crime plot. But then I realized that I needed an explanation for this. And an action. When I had everything together, I asked a good friend, an editor, to advise me. She helped me to work out the writing of the crime novel. So I wrote my first thriller with Trainerin and was very lucky that it became a bestseller right away.

WELT AM SONNTAG: When will you write a non-fiction book?

Wickert: If I have the feeling that a topic is so important to me that I want to explain it to myself. My last non-fiction book was called “Identifis you” because I was concerned with the topic of German identity. Fernand Braudel, one of the most important French historians of the 20th century, wrote several volumes entitled "L'Identité de la France" ("The Identity of France") as a late work. The book appeared in German only under the title "France".

Federal President Roman Herzog said in the early 1990s: "Every German has their own unique identity, but nobody has been able to explain to me what a national identity is, it doesn't exist." I thought, someone is wrong. Namely the President. The topic of national identity kept preoccupying me until at some point I investigated why the Germans have this problem with the term "identity". In addition, the right-wing extremists call themselves “identitarians”, which is why I wanted to make it clear that national identity is something completely normal and not something right-wing extremist.

WELT AM SONNTAG: At your age, how do you see what is to come or can come?

Wickert: My friend Roland Dumas, the former French foreign minister, has just turned 100 and sometimes when I buy my croissants in the "Par ici" I see Mr. von Dohnanyi, about as fit as I am, he is 94 years old. Why should I worry about the future?

WELT AM SONNTAG: If you look back for once, what were the most important times in your life?

Wickert: Certainly my time as a foreign correspondent in France and America. Both have influenced me a lot, in France the importance of intellectuals, of history. Now I went to school in France for three years, which certainly helped. But even in America, where I studied, I noticed that when Germans look to America, they look to the east coast and then they have had enough. But what freedom means can only be understood in the country itself and probably more in the West.

WELT AM SONNTAG: How do you rate the proposal by WDR director Tom Buhrow for a necessary, comprehensive reform of broadcasters in Germany?

Wickert: Tom Buhrow didn't make a suggestion, he just asked questions. And he asked the right questions, you can ask many more questions. Even more important, however, is the question of who can answer these questions.

Wickert: Politicians apparently hardly want to give these answers. It has to be driven by a couple of courageous directors who say: we're not going to wait until all the broadcasters and all the actors have reached an agreement, we're going ahead and starting with reforms.

WELT AM SONNTAG: Buhrow's questions go very deep, for example whether ARD and ZDF should be merged or smaller stations with larger ones...

Wickert: That will be the problem. When someone says: We don't need Radio Bremen or Saarländische Rundfunk, or we have to do things fundamentally differently, many people are of course not enthusiastic. As a first step, politicians would have to fill the committees with expert knowledge, and the directors must insist on this.

WELT AM SONNTAG: Buhrow has proposed a kind of constituent assembly for the redefinition of the public service. Does this make sense?

Wickert: Such an assembly would be wonderful if competent people weren't there again for the parties.

Even his start was international: Ulrich Wickert was born in Tokyo, he grew up in Heidelberg and Paris, studying political science and law brought him to Bonn and Connecticut. After the state examination, he became editor of the program "Monitor", then head of the ARD studios in New York and Paris and from 1991 to 2006 presenter of "Tagesthemen".