When he is found with 213 Kilos of Hashish in a Stolen Van, he tries to ram some Gor civil guards.

The Civil Guard seized 213 kilos (more than 213 kilos) of hashish from a vehicle that was stolen in France. 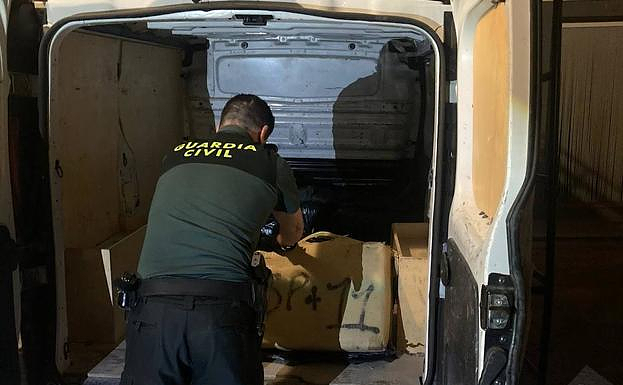 The Civil Guard seized 213 kilos (more than 213 kilos) of hashish from a vehicle that was stolen in France. It was initially pursued by the A-92N, and then located in Gor. The Civil Guard arrested a French national aged 42 years old, suspected of drug trafficking and committing a crime against the public health.

On June 24, at 8:00 pm, the intervention occurred. Agents of the Guadix Civil Guard were on patrol at Kilometer 10 of the A-92N when they were stopped by a van bearing French license plates. They found this suspicious. Accitan agents confirmed that the vehicle had been stolen in France by consulting the license plates in the database. They tried to catch him immediately, but the van driver rammed the patrol vehicle in an attempt to drive it off of the road. He fled at high speed. The van was seen leaving the Gor exit at high speed and was abandoned later by its driver in the same city.

The Civil Guard set up a perimeter around the town to stop Guadix agents after the van, as well as agents from the Diezma or Benalua post who joined the search.

Thanks to citizen cooperation, the Civil Guard located the van shortly after it was locked and well-parked in a Gor square. The Civil Guard took the van to a judicial repository and found six loopholes that contained 213.6 kilos hashish.

Agents continued searching and, thanks to citizen cooperation, located the driver of van in a bar where they were trying to get unnoticed by the clients. The civil guards found the keys to the van in the driver's pocket at the time of his arrest.

To instruct proceedings, the detainee was also transferred with the drug and vehicle to Guadix Civil Guard barracks.

‹ ›
Keywords:
IntentaEmbestirGuardiasCivilesDescubiertoKilosHachisFurgonetaRobada
Your comment has been forwarded to the administrator for approval.×
Warning! Will constitute a criminal offense, illegal, threatening, offensive, insulting and swearing, derogatory, defamatory, vulgar, pornographic, indecent, personality rights, damaging or similar nature in the nature of all kinds of financial content, legal, criminal and administrative responsibility for the content of the sender member / members are belong.
Related News