Wearing a mask: what the authorities recommend as winter approaches

Some thought it behind us, but the mask is back. 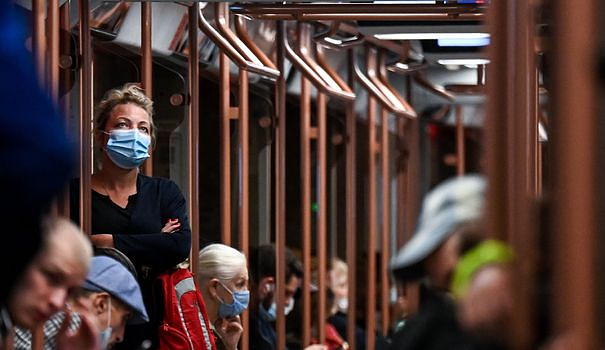 Some thought it behind us, but the mask is back. While the number of daily contaminations has increased significantly in recent days, Prime Minister Elisabeth Borne announced on Tuesday November 29 that wearing a mask is recommended "as soon as we are with fragile people or in crowded areas such as public transport. “and that it is time to” rehabilitate barrier gestures “. A new wave of the Covid-19 epidemic is starting to rise – the 9th, more exactly – and it “still kills”, recalled the head of government during the session of questions to the government at the National Assembly.

After a lull of a few weeks accentuated by the exceptionally mild temperatures of autumn, the indices of the epidemic are starting to rise again. This past week, more than 40,000 contaminations have been counted each day by Covid Tracker, approaching the alert threshold, an increase of 46% in one week. In the vast majority of departments, the incidence rate also rose to 500 cases per 100,000 inhabitants last week.

This call for wearing a mask in an enclosed place is for the time being only a recommendation, and not an obligation entailing the payment of a fine of 135 euros in the event of a breach of the law, as France has known. many over the waves.

But "if you want to be in good shape during the holidays, now is the time to protect yourself", hammered infectious disease specialist Anne-Claude Crémieux on the Franceinfo set this Wednesday, November 30. The festive periods have been peaks for the explosion of contamination for the past two years. In the columns of Le Parisien, the scientist regretted a collective "amnesia" a few days earlier, noting that the French have "forgotten that the masks are effective, this can be seen in the metro in particular, where few people wear them".

Wearing a mask and barrier gestures are not only used to protect yourself, they also help to protect French hospitals from “additional pressure”. The latter are already facing a massive lack of resources while a triple epidemic of Covid-19, influenza and bronchiolitis is spreading throughout the territory.

"Get vaccinated, it protects you, it protects your hospital," insisted Elisabeth Borne again, castigating "terrifying remarks about vaccines", "some of which border on obscurantism". For a few days and the launch of winter vaccination campaigns, antivax networks have been back, particularly on social networks, supported by certain political actors.

By launching this "solemn appeal", Elisabeth Borne also assured that she had full confidence in the French: "They have always answered the call of responsibility. I have no doubt that they will do it again", a- she concluded.