Human activities have caused CO2 levels to rise 50% in the atmosphere compared to pre-industrial times. 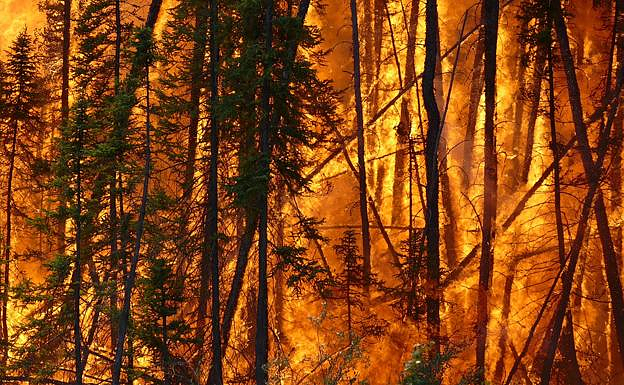 Human activities have caused CO2 levels to rise 50% in the atmosphere compared to pre-industrial times. This is despite a temporary decrease in greenhouse gas emissions that occurred during the pandemic. The world has warmed by an average of 1.1 degrees Celsius, with recent studies indicating that the world is on track to warm by 2.7 degrees Celsius by the end.

The climate is warming, which means that droughts, high temperatures, and low humidity are more common and more severe. These weather events have significant effects on society, food production, and the economy. They also increase the likelihood of forest fires.

Climate change is drying vegetation and making landscapes more flammable, increasing the risk of large and dangerous fires. Fire weather indexes can measure changes in fire weather conditions. These indicate the wildfire risk for a set of atmospheric conditions (temperatures, humidity, rain, wind) and help to classify it.

A new global analysis has shown that fire-friendly weather conditions are growing at rates faster than climate models predict.

Our study uses weather observations and climate modeling to evaluate past, present, and future trends of fire weather conditions. This helps us understand how fire risk is changing globally as well as in particular countries and regions.

We also examine the results of recent research to determine how climate changes, as well as land use and vegetation cover, affect the fires that are and will be occurring in the future.

Our data shows that the length of fire season, which is the time when the most fires occur in a given year, has increased significantly in many parts of the globe since the 1980s. Globally, the average length of the fire season has increased by 27%, with a notable increase in the Mediterranean basin (55%), Amazon (94%), as well as the western forests (80%).

Additionally, extreme fire weather risks have increased by 54% worldwide, a remarkable 132% in the Mediterranean Basin and 166% in Amazon. This has made it more common for fires to be larger, more intense and more difficult to control than ever before. This is why recent wildfires in Australia and the west have been so destructive and extensive. These firestorms are also known as megafires, sixth-generation fires, or firestorms. They have greater impact on ecosystems and emit more carbon dioxide into the atmosphere.

With each degree of global warming, the impact of climate change on fire risks will be greater in the future. Global temperatures that exceed 2 degrees Celsius above the preindustrial average will lead to fire-prone weather conditions in most parts of the globe.

The causes of fires are not limited to climate change and its impact on pyrometeorological conditions. Climate change can be influenced by human actions.

People starting fires is especially important outside of the huge northern forests of Eurasia or North America. There, there is a low population density and most fires start by lightning. Forest fires are more likely to be started by sparks from power lines and agricultural machinery than in most other parts of the globe.

Humans have made it more difficult for fires to spread in fire-prone areas. This is evident in the savannahs of Africa, Brazil, and northern Australia where the area that has burned has declined in recent years.

While total fire suppression in naturally fire-prone areas - which is common in the US, Australia, and Mediterranean Europe – may temporarily suppress flames, it can also lead to excessive fuel buildup that contributes to more severe wildfires, particularly during drought times.

Although wildfires are enjoying an upward trend in most parts of the globe, many people's actions have reduced or nullified the climate factors in some regions. Although this may sound promising, the effectiveness of our efforts against climate change diminishes with every tenth degree of warming.

Although it is hard to predict the impact of climate change and human activities on wildfire risk in the future, one thing is certain: Reducing or reversing the accumulation of CO2 and other greenhouse gasses in the atmosphere will decrease the fire danger. Many regions have seen fire weather conditions rise faster than expected. Further warming the planet through increased emissions will only make them worse.

Global warming above 2 degrees Celsius, which is the minimum goal under the Paris Agreement, can be dangerous. This means unprecedented wildfires. It matters a lot what we do next.

‹ ›
Keywords:
PodemosInfluirProducenIncendios
Your comment has been forwarded to the administrator for approval.×
Warning! Will constitute a criminal offense, illegal, threatening, offensive, insulting and swearing, derogatory, defamatory, vulgar, pornographic, indecent, personality rights, damaging or similar nature in the nature of all kinds of financial content, legal, criminal and administrative responsibility for the content of the sender member / members are belong.
Related News