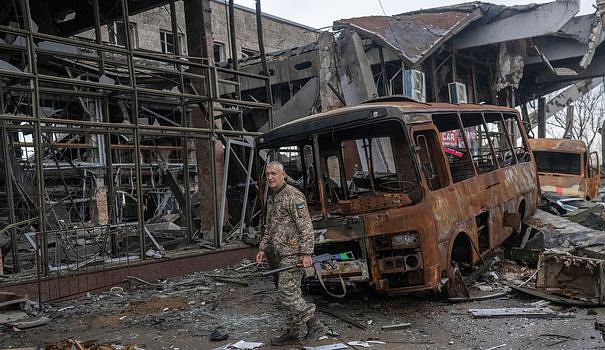 Ukrainian President Volodymyr Zelensky has warned his citizens and defense forces to prepare for further missile strikes. "We understand that the terrorists are preparing new strikes. We know that for sure. And as long as they have missiles, they won't stop, unfortunately," he said in his Sunday evening speech. In his daily address, the president warned: "The week ahead can be as difficult as the one that has just passed."

Massive Russian strikes on energy infrastructure on Wednesday cut off much of the electricity and water supply as temperatures dropped sharply.

Zelensky called on his people for unity, asking them to "not leave those whom you can help unaided".

Ukrainian President Volodymyr Zelensky says Russia plans to launch new missile attacks on his country, warning defense forces and citizens to prepare for strikes. "We understand that the terrorists are preparing new strikes. We know that for sure. And as long as they have missiles, they won't stop, unfortunately," he said in his Sunday evening speech.

The mayor of kyiv, Vitali Klitschko, on Sunday, November 27, dismissed criticism from the Ukrainian president and his allies on his way of helping residents to resist power cuts. The former professional boxer countered that 430 "warming centres" were helping residents cope with the effects of Russian attacks on power stations, and more than 100 additional centers were planned in case of extreme conditions.

"I don't want to get involved in political battles, especially in the current situation," he commented in a video posted on Telegram on Sunday. "It's insane. I have things to do in town. Zelensky had previously said that Kyiv had not done enough to help residents. Ukrainian authorities are gradually restoring power, helped by the reconnection of the four nuclear power plants in the However, millions of people are still without heat or electricity after the most devastating Russian airstrikes of the war.

Hundreds of Ukrainians fled the city of Kherson on Sunday as Russian shelling intensified, according to British media outlet The Guardian. Evacuations have been launched by the Ukrainian authorities. The liberation of Kherson earlier this month marked a major battlefield gain for Kyiv, but the population has struggled with lack of water, heat and electricity. The evacuations began last week amid fears that the infrastructure damage caused by the war was too severe for people to bear during Ukraine's harsh winter.

The exodus has been exacerbated by Russian shelling, which has killed 32 civilians since Russian forces left the city on November 9. In the evening, Sunday, November 27, the governor of the Kherson region, Yaroslav Yanushevych, announced that electricity has begun to be restored in the city. In the Kyiv Independent media, he maintains that 17% of households would now be connected to the electricity network.

The Ukrainian president has announced the launch of a program called "Grain of Ukraine" to subsidize grain exports to poor countries according to Le Live du Monde. "We plan to send at least sixty ships from Ukrainian ports to the countries most affected by the food crisis and in need of urgent aid," said the Ukrainian president, who claims to have collected 150 million dollars (144 million euros) thanks to the help of more than twenty countries, including France.