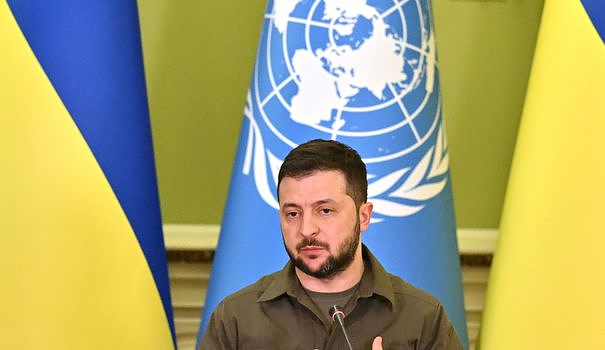 On the military level, Ukraine has not said its last word. kyiv on Sunday claimed new territorial gains from Russian forces in the east of the country, such as the strategic city of Izium. In total, since the beginning of September, more than 3000 square kilometers have returned to Ukrainian control according to the army of the invaded country.

"A total power cut in the Kharkiv and Donetsk regions, a partial one in the Zaporizhia, Dnipropetrovsk and Sumy regions". This was stated by Volodymyr Zelensky in a statement on social networks. The Ukrainian president claimed on Sunday that Russia was responsible for the power cuts that affected large territories in eastern Ukraine and accused "Russian terrorists" of deliberately hitting civilian infrastructure. "No military installations" affected, he added. "The goal is to deprive people of light and heating."

Authorities in the Sumy, Dnipropetrovsk and Poltava regions then quickly announced that power had been fully restored. In the Kharkiv region, "a company employee was killed" by a Russian strike on a power plant, and power was partially restored, according to regional governor Oleg Synegoubov.

These Russian bombardments on strategic infrastructure took place as Russian forces retreated into eastern Ukraine, their lines broken by a Ukrainian counter-offensive. Volodymyr Zelensky said on Sunday evening that his army had retaken the strategic town of Izium in eastern Ukraine from the Russians. According to military experts, the loss of Izium by Moscow risks seriously curbing its military ambitions in the east of the country.

Ukraine claimed throughout the weekend new military successes against the Russian army in the eastern and southern parts of its territory, with Moscow acknowledging that it had lost ground. In total, "since the beginning of September, more than 3,000 square kilometers have returned to Ukrainian control," General Valeri Zalouzhny, commander-in-chief of the Ukrainian army, said in a statement. "Around Kharkiv we have started to advance not only south and east but also north. We are 50 kilometers from the border," he added.

The map of the Ukrainian region of Kharkiv, presented Sunday by the Russian Ministry of Defense during its daily briefing, showed a major withdrawal of the Russian army from this region, the scene of a vast Ukrainian counter-offensive. According to this map presented in the briefing video, released by the ministry, the Russian army only controlled a small part of the territory in the east of the Kharkiv region, behind the Oskol river, on Sunday.

On June 2, Volodymyr Zelensky acknowledged that 20% of the total area of ​​his country, or some 125,000 km2, was in Russian hands, including more than 43,000 km2 (Crimea and part of the Donbass basin) conquered before the outbreak of the invasion on February 24. At the beginning of the month, the Ukrainian army first announced a counter-offensive in the south, before making a surprise and lightning advance in the Kharkiv region over the past week.

French President Emmanuel Macron told Vladimir Putin that it was "the Russian occupation the cause of the risks" weighing on the Ukrainian nuclear power plant in Zaporizhia" and asked him to withdraw "heavy and light weapons", a announced the Elysée.

Emmanuel Macron "will remain in contact" with his Ukrainian counterpart Volodymyr Zelensky as well as the Director General of the IAEA Rafael Grossi, "and will speak again" to his Russian counterpart "in the coming days, so that an agreement can be reached guaranteeing the safety of the centre," added the French presidency in a press release.

Previously, the Kremlin had indicated that Vladimir Putin had warned Emmanuel Macron, in a telephone call, against "catastrophic consequences" of "regular Ukrainian attacks" against this power plant, the largest in Europe occupied by Russian forces. The Russian president drew attention to "regular Ukrainian attacks on the sites of the Zaporizhia power plant, including the deposit of radioactive waste, which could lead to catastrophic consequences", according to a statement from the Kremlin.

The Russian president also informed his French counterpart of the "measures taken by Russian specialists to ensure the security of the plant and underlined the need to put pressure on the kyiv authorities so that the bombardments targeting the plant stop immediately" .

During his appeal to the Russian President, Emmanuel Macron had also "condemned the continuation of Russian military operations in Ukraine and recalled his demand that they cease as soon as possible, that negotiations begin and that sovereignty and independence be restored. territorial integrity of Ukraine", according to the Elysée. Emmanuel Macron and Volodymyr Zelensky had again exchanged by telephone on Saturday September 10 about the situation still “very worrying” around the power plant, had indicated the Elysée.