War in Ukraine: Zelensky announces the takeover of new villages from the Russians 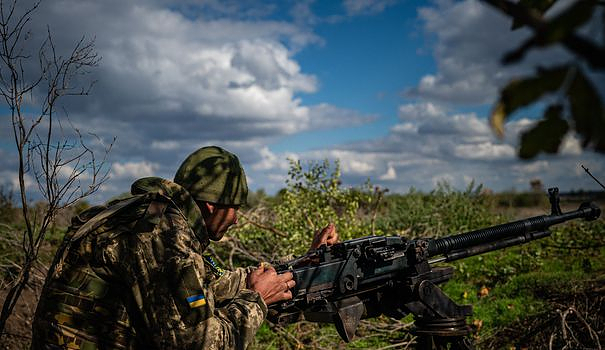 The Ukrainian army continues to gain ground, claiming new reconquered territories. Ukrainian President Volodymyr Zelensky announced on Wednesday that three new villages had been recaptured by kyiv forces from the Russian army in the Kherson region of southern Ukraine, where Moscow troops are struggling.

"Novovoskresenske, Novogrygorivka and Petropavlivka in the Kherson region have been liberated in the last 24 hours," Volodymyr Zelensky said in a video posted on social media, assuring that the Ukrainian counter-offensive "continues".

Earlier in the day, the Ukrainian governor of the Lugansk region, so far under almost total control of Moscow, proclaimed a breakthrough. "Now it's official. The reconquest of the Lugansk region has begun. Several localities have already been liberated," said Sergiï Gaïdaï, without further details. Almost all of the Kharkiv region (northeast) now appears to be under Ukrainian control, paving the way towards that of Lugansk, a bastion of separatists installed by Moscow since 2014.

Kremlin spokesman Dmitry Peskov assured that the lost territories would be "taken back". Vladimir Putin had sworn to him to defend the annexed areas, even if it meant using nuclear weapons, a threat that did not stop either the Ukrainian counter-offensive or Western arms deliveries.

Russia has formally taken over the Zaporizhia nuclear power plant in southern Ukraine, which it has occupied militarily since the beginning of March, according to a decree signed on Wednesday by its President Vladimir Putin. "The government will have to ensure that the nuclear installations of the plant (...) are considered federal property", can we read in the Russian decree. For its part, the Ukrainian operator Energoatom said it considered Vladimir Putin's decree "null and void, absurd and inappropriate".

Shortly after this announcement, the head of the International Atomic Energy Agency (IAEA), Rafael Grossi, who had planned to travel to kyiv and Moscow this week, announced his departure for the Ukrainian capital to discuss the establishment of a protection zone around the plant. Moscow and kyiv have accused each other of bombing the site for several months, raising the specter of a major nuclear disaster similar to that of Chernobyl in 1986.

The "European Political Community" is taking its first steps: 44 leaders from the continent are meeting this Thursday, October 6 in Prague (Czech Republic), in an unprecedented format which is also a strong symbol, seven months after the start of the Russian invasion in Ukraine. The "family photo" in the imposing Prague Castle, which dominates the old town, aims to make an impression as Russian President Vladimir Putin again raises the specter of nuclear weapons and the continent fears a crisis unprecedented energy. Ukrainian President Volodymyr Zelensky will speak from kyiv by videoconference.

A first flight of the Russian company Nordwind Airlines arrived Wednesday in Varadero, Cuba, after seven months of interruption to this tourist destination due to sanctions hitting Russia after the invasion of Ukraine, indicated the official agency. Cuban Prensa Latina. The Cuban tourism agency Cubatur received the passengers of this first flight, "as part of a trip that marks the resumption of tourist flights from the Russian capital" to Cuba, added the same source.

This mechanism wanted by the G7 countries to limit Moscow's income is "a bad idea" which would give back control to the Russian president, said Wednesday the CEO of TotalEnergies, Patrick Pouyanné, who spoke at the Energy Intelligence Forum conference. , which is being held in London until Thursday.

"What I'm sure of is that if we do that then Putin will say 'we're not selling our oil' and the price won't be $95, it'll be $150. That's not something that I would like to give to Vladimir Putin," he added. In September, the G7 countries had decided to "urgently" cap the price of Russian oil, a complex mechanism to put in place, in particular by inviting a "broad coalition" of countries to implement it, to limit revenues linked to the sale of hydrocarbons which finance Moscow's offensive in Ukraine.

The European border and coast guard agency Frontex announced on Wednesday that the number of Russians entering the European Union fell by 20% last week compared to the previous week, due to new restrictions. imposed in EU countries.

Nearly 53,000 Russian nationals entered the EU between September 26 and October 2, including 29,000 through Finland, 8,877 through Estonia and 8,536 through Poland via Ukraine, according to the European Agency. border guards and coast guards. "Visa policy restrictions on the European side and the measures taken by Russia to discourage mobilized men who want to leave their country should increasingly limit the arrival of Russian citizens in the EU", explained Frontex. On September 30, the European Commission invited member states to be more restrictive in granting visas to Russians and in border controls.

The symbol is strong. Spain and Portugal have announced that they want to include Ukraine in their joint bid for the organization of the 2030 World Cup, while kyiv faces a Russian invasion. This candidacy "is more than a symbol of faith in our common victory," he wrote on Twitter.

“Ukraine will endure, prevail and be rebuilt through the solidarity of its partners,” he added. The three countries hope that their joint candidacy will be a "source of inspiration for society through football, sending a message of solidarity and hope", according to the press release from the Spanish federation (RFEF) announcing the integration of Ukraine.