In a war, the images are staged, scrutinized and provide information on the intentions and morale of the troops involved. 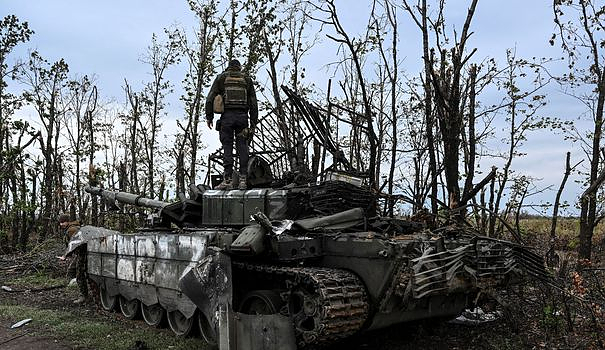 In a war, the images are staged, scrutinized and provide information on the intentions and morale of the troops involved. Ukrainian President Volodymyr Zelensky is no exception to this empirical rule: he went to the Kharkiv region on Wednesday, still in the hands of the Russian army a few weeks ago, to ensure his release in his "quasi -totality" and promised "victory".

The Ukrainian counter-offensive, carried out since the beginning of the summer, having resulted in the recapture of a large number of localities, provoked the reaction of the Russian authorities. Air strikes follow one another along the entire front line. “Massive strikes were carried out in the regions of the localities of Dvoritchna, Balaklya and Kupyansk,” welcomed the Russian Ministry of Defense on Wednesday. They pose various threats to cities and facilities: floods, power cuts, nuclear disaster...

In the city of Izioum, 50,000 inhabitants before the war, prey to violent fighting which pushed the city into the arms of the Russian occupiers before Ukraine regained control of the territory, satisfaction could be read on the faces . The visit of Volodymyr Zelensky, for his first trip to the Kharkiv region, materializes the advance of the Ukrainian troops: "We are only advancing in one direction, forward, towards victory", he underlined while pointing out the significant destruction suffered by Izioum.

A little later in the day, in his daily address, he insisted that "virtually all of the Kharkiv region is liberated", with the capture of "400 localities" from Russian troops, referring moreover to a return to "a normal and safe life" for "the 150,000 Ukrainians who have remained in this territory". The war is, however, far from over. In Mykolaiv (South), two buildings were hit and two people died, according to local authorities. In Bakhmout, a town in the Donetsk region that Moscow has been trying to conquer for months, five civilians were killed on Tuesday, the regional governor said.

The Ukrainian president also visited Kryvyï Rig, and his visit provoked the wrath of the Kremlin army. The city of 600,000 inhabitants, located in central Ukraine, is threatened with flooding after a Russian strike damaged hydraulic infrastructure and caused the flooding of a river, according to the Ukrainian presidency. "At the point of impact, we observe a water flow of 100 m3 per second, which is a large volume. The water level of the Ingoulets (the river) changes every hour," said the deputy head of the presidential administration, Kyrylo Tymoshenko.

The center of this city as well as a district of the city are "under the risk of flooding". "It's a challenge for all of us, but the situation is under control. All services are involved to eliminate the threat as quickly as possible," he added on Telegram. Ukrainian President Volodymyr Zelensky, from Kryvyi Rig, assured that the strike had not caused any casualties. But he presents the Russian act as an "attempt to flood Kryvyï Rig".

On his return from his trip, Volodymyr Zelensky was the victim of a road accident, without the doctors deploring serious injuries. A motorist rammed the vehicle carrying the head of state through kyiv. "Doctors accompanying the president provided emergency assistance to the driver of the car and transferred him to an ambulance," presidential spokesman Sergiy Nikiforov said in a statement posted on Facebook. "The police will investigate all the circumstances of the accident," he continued, without further details.

Vladimir Putin welcomes "constructive cooperation" around the Zaporijia nuclear power plant in southern Ukraine, occupied by the Russian army, where a delegation from the International Atomic Energy Agency recently visited ( IAEA). Ukraine announced on Monday, September 12, the shutdown of the last active reactor of the plant, a decision which should accentuate energy tensions in Ukraine. The threat of a winter without heating hovers.