War in Ukraine: traffic resumes on the Crimean bridge, the day after the explosion

Who blew up the Crimean Bridge? In the aftermath of the events, doubts remain. 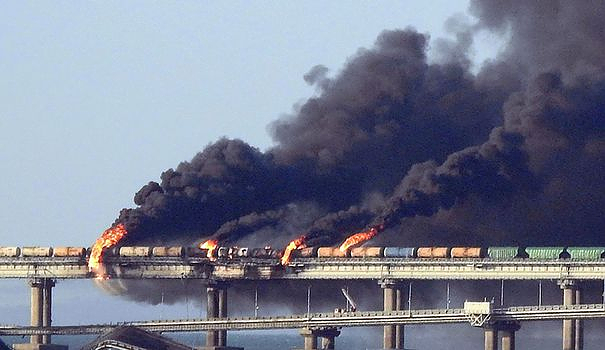 Who blew up the Crimean Bridge? In the aftermath of the events, doubts remain. The edifice built by Russia is more than a major axis through which soldiers and weapons pass to invade Ukraine. It is also the symbol of the annexation of the island of Crimea in 2014. The Russian regime hastened to defend its reputation by announcing a resumption of the circulation of vehicles and trains. But behind the displayed serenity, the circles of power seem feverish. Saturday, October 8, Vladimir Putin replaced the person in charge of the invasion in Ukraine.

The Crimean Bridge, a key and symbolic infrastructure linking Russia to the peninsula annexed in 2014 to the detriment of Ukraine, reopened to road and rail traffic after being partially destroyed on Saturday by a huge explosion attributed, by Moscow, to a truck bomb. "All scheduled trains will pass in full," Russian Deputy Prime Minister Marat Khousnulline told the Ria Novosti news agency. “We have the technical capabilities for this,” he assured on his Telegram account. The Russian army, in difficulty on the front of Kherson, in the south of Ukraine, assured that the supply of its troops was not threatened: "The supply (...) is carried out continuously and complete, along a land corridor and partly by sea."

CCTV footage shared on social media showed a powerful explosion as several vehicles drove across the bridge, including a truck that Russian authorities suspect was the source of the blast. On other shots, we can see a convoy of tank cars in flames on the railway part of the bridge, and two spans of one of the two collapsed road lanes. According to investigators, the attack, which occurred in the early morning, killed three people: the driver of the truck and two people - a man and a woman - who were driving near the explosion and whose bodies were taken out of the water. .

After having been able to seem, by an ironic tweet Saturday morning, to recognize half-words a Ukrainian attack, the adviser to the Ukrainian presidency Mykhaïlo Podoliak later returned to a "Russian track". In his evening address, Ukrainian President Volodymyr Zelensky was content to say, referring to the annexed peninsula: "Unfortunately, it was cloudy in Crimea", not to mention the explosion. If Ukraine is behind the fire and explosion on the Crimean Bridge, the fact that such crucial infrastructure so far from the front could be damaged by Ukrainian forces would be a snub for Moscow.

The doubt remains, fueled by the Ukrainian statements themselves - Ukraine has no interest in giving Moscow a pretext to unleash its violence. A statement issued by the presidency attributed the explosion to an internal struggle between the FSB and the Russian army. "It should be noted that the truck that exploded, by all indications, entered the bridge from the Russian side. It is therefore in Russia that the answers must be sought," the statement said. The Russian Investigative Committee said it had established the identity of the owner of the truck bomb, a resident of the Krasnodar region in southern Russia, and that investigations were underway.

A sign of discontent in high places over the conduct of operations, Moscow announced on Saturday that it had appointed a new man at the head of its "special military operation" in Ukraine: General Sergei Surovikin, 55. He is a veteran of the civil war in Tajikistan in the 1990s, the second Chechnya war in the 2000s and the Russian intervention in Syria launched in 2015. Until then, he led the "South" group of forces in Ukraine, according to a Russian ministry report from July.

This decision, which was, unusually, made public by Moscow, comes after a series of defeats suffered by the Russian army in Ukraine. Moscow's forces were driven out of most of the Kharkiv region in the northeast in early September, thanks to a Ukrainian counter-offensive that allowed kyiv to retake thousands of square kilometers of territory. Russian troops also lost 500 square kilometers of territory in the Kherson region, and abandoned Lyman, a strategic logistics node.

The Zaporizhia nuclear power plant, at the center of a standoff for months in southern Ukraine, which required its shutdown, has again lost its external power source due to bombardments. It relies on emergency generators, alerted Saturday the International Atomic Energy Agency (IAEA), whose mission is on site.

In addition, at least 17 people were killed on Sunday in bombardments on the city of Zaporizhia, located several tens of kilometers from the power plant, three days after previous strikes which had killed 17 people, we learned from a source. official. The strikes hit houses and multi-storey apartment buildings, he said. By Thursday, the city had already been targeted by seven missiles in the early hours of the morning, also killing 17 people.