War in Ukraine: These Russian documents reveal the difficulties of Putin's army

In March 2022, shortly after the start of the invasion, Russian soldiers move into a garage in Balakliia, a town in eastern Ukraine with a pre-war population of 26,000. 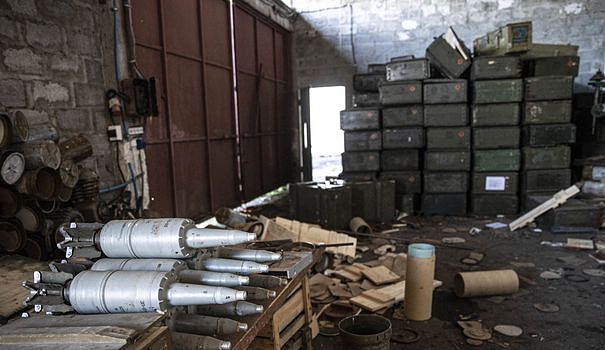 In March 2022, shortly after the start of the invasion, Russian soldiers move into a garage in Balakliia, a town in eastern Ukraine with a pre-war population of 26,000. They transform the building into a command center for the surrounding villages. Located 90 kilometers south of Kharkiv, the region's capital, the place became one of the outposts of occupied Donbass. Since then, the Russians have fled under the pressure of the kyiv counter-offensive, leaving in their debacle numerous mines and, above all, thousands of notes that the Reuters news agency was able to obtain.

These accounts of battles, inventories and exchanges with intelligence report an exhausted battalion. Disorganized and depopulated troops, struggling to determine Ukrainian strategy and positions on the eve of a lightning counter-offensive that will force them to abandon the sector. These documents illustrate the difficulties of the Russians in containing the return of Ukrainian forces, which have taken over more than 3,000 km2 since the end of August, and confirm the information from Western intelligence and Ukrainian leaders.

Equipment is also missing. Soldiers, sometimes inexperienced, are reduced to operating commercial drones in an attempt to intercept valuable communications and warn of any land arrival. At the end of August, the group had only two out of five regular drones left. It no longer had any jammers and four anti-tank systems were missing, reports the inventories, consulted by Reuters.

The documents show that the group expected a Ukrainian attack as early as the end of July and had regularly made known their need for troops and equipment - "Quadcopters!!! Urgent!", one can read in particular on a briefing note scribbled at the hurry. The Ukrainian battle to retake Balakliia lasted two days: the kyiv army arrived on September 6; the Russians had decamped on the 8th.

Before that, an episode particularly damaged the group, leaving 39 injured, 7 dead, 17 missing, and causing the destruction of a tank. On June 19, a Ukrainian column surprised the occupiers in the middle of the afternoon in a village under the command of Balakliia. The Russians, positioned in the village, lack ammunition and are about to be overtaken. A state officer, whose identity has been anonymized, orders not to abandon the position and sends reinforcements, without being able to avoid heavy losses. After the battle, five soldiers asked to be treated for "acute stress reaction", reports the news agency.

The documents recovered by Reuters make it possible to identify 11 section commanders, and especially that of the group established in Balakliia. This is Colonel Ivan Popov, 11th Army Corps, Baltic Fleet of the Russian Navy. Ivan Popov fought in Chechnya and Georgia before settling in this damp bunker with his men, regularly under fire from HIMARS, these precision rocket launchers supplied to the Ukrainian army by the United States.

The garage housed meetings of superiors and also served as a place of detention for Ukrainian veterans. Others were detained at the police station, which was also occupied. The documents cross-checked by Reuters also attest to an interrogation center run by a certain commander V. "Granit" - a pseudonym - where civilians were tortured. Upon liberation of the area, the Ukrainian authorities discovered two torture chambers arranged in Balakliia.