War in Ukraine: Russia prepares to evacuate the population of Kherson

Faced with the advance of Ukrainian troops, the Russians retreated further. 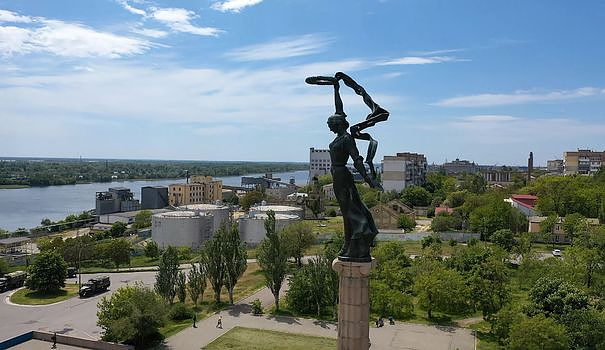 Faced with the advance of Ukrainian troops, the Russians retreated further. On Tuesday, October 18, Russian General Sergei Surovikin, in charge of operations in Ukraine for ten days, announced on the Rossiya 24 channel that the population of the city of Kherson was going to be evacuated. Capital of the eponymous region occupied by Russia since the spring and annexed in September, this city is currently targeted by Ukrainian strikes on its "social, economic and industrial infrastructure", he noted.

For its part, kyiv denounces new strikes, having notably targeted energy infrastructures. According to Ukrainian President Volodymyr Zelensky, "since October 10, 30% of Ukrainian power plants have been destroyed, causing massive blackouts across the country" as winter approaches.

The Ukrainian operator Energoatom accused Russia on Tuesday of having “abducted” two executives from the Zaporizhia nuclear power plant, the largest in Europe, which it has occupied since March in southern Ukraine. According to Energoatom, the head of the IT department Oleg Kostioukov and the deputy director of the plant Oleg Ocheka were taken by Russian forces on Monday "to an unknown destination".

The Ukrainian operator called on the head of the International Atomic Energy Agency (IAEA), Rafael Grossi, on social networks to "make every effort" to obtain their release. “This is another worrying development which I hope will be resolved quickly,” said the IAEA chief, adding that consultations would continue to create a protection zone around the site.

Russia is militarily occupying the territory of the Zaporijia power plant and President Vladimir Putin has claimed its annexation in early October, as well as that of four Ukrainian regions.

"The Russian army will ensure above all the safe evacuation of the population", declared on public television Rossia 24 General Sergei Surovikin, in charge of operations in Ukraine for ten days, in particular in Kherson, capital of a region of southern Ukraine militarily occupied since the spring and annexed in September. "The situation in the area of ​​the special military operation can be described as tense," he also acknowledged. "The enemy does not give up its attempts to attack the positions of the Russian troops... The Ukrainian regime is seeking to break through our defence", bringing together "all its reserves" for the counter-offensive, he said. noted.

In addition, the leader installed in the Kherson region by Moscow, Vladimir Saldo, announced an evacuation to the left bank of the Dnieper river of the population of several localities in his region in order to allow the Russian army to set up "Massive defensive constructions" in the face of a "vast counter-offensive" prepared by the Ukrainian forces.

"The very fact that Russia is calling on Iran for help is the Kremlin's recognition of its military and political bankruptcy," Volodymyr Zelensky taunted in his daily address posted on social media. "For decades (the Russians) spent billions of dollars on their military-industrial complex, and they ended up bowing to Tehran for pretty basic drones and missiles," he blasted.

kyiv and its Western allies have accused Russia of using Iranian-made drones, including the Shahed 136 suicide bombers, in recent weeks to carry out large-scale attacks in Ukraine. Earlier on Tuesday, Iran said it was ready to hold talks with kyiv to clarify claims it deemed 'baseless' that Tehran was supplying Russia with weapons and drones used in its invasion of Ukraine. .

kyiv denounced on Tuesday the "inaction" of the International Committee of the Red Cross (ICRC) to help its soldiers prisoners of the Russians to whom the international organization has not yet been able to visit. "Unfortunately, with each exchange, we note that the inaction of the ICRC has led to our prisoners of war and civilian hostages being tortured daily by starvation, by electrocutions", regretted the Ukrainian human rights officer, Dmytro Loubinets , quoted in a press release from the presidency. According to him, the ICRC is not fulfilling its mandate, which provides for the visit of military and civilian prisoners in conflict zones.

Questioned by Agence France Presse, the ICRC said it "shared the frustration" of kyiv. "We know that behind this lies the anxiety of families not knowing the fate of their loved ones," said an ICRC spokesman. “We reiterate that we will never stop demanding access to all prisoners of war until we can see them repeatedly, wherever they are detained,” he said. Last Friday, the ICRC had already called for "immediate and unhindered" access to thousands of prisoners of war from the conflict in Ukraine, whom it has not yet been able to visit.

Kevin McCarthy, the leader of the Republicans in the lower house of Congress, warned on Tuesday that his party would not sign a "blank check" to Ukraine if it wins, as the polls predict, the majority of seats in the House of Representatives in the US midterm elections. "I think we're going to end up in a recession and we're not going to write a blank check to Ukraine. It's not possible," McCarthy told the political news site Punchbowl News.

If congressional support for Ukrainian defense funding, so far largely consensual, were to dwindle, this points to difficulties ahead for Kyiv. Since Russia's invasion of Ukraine began on February 24, Joe Biden's government has released $17.6 billion in military aid to Ukraine, with bipartisan agreement in Congress, although some of the Republicans' right-wing aide protested. Almost all of the Republican representatives voted in September against a law of massive investments of 12.3 billion dollars, including 3 billion in military aid to Ukraine in the form of armaments, various supplies and payment of salaries of Ukrainian soldiers. The law, however, passed with the support of all Democrats.

Russia will likely need two to four years to rebuild its armed forces to pre-war levels in Ukraine, Estonia's defense minister said on Tuesday, urging continued pressure on Moscow. During a trip to Washington, Hanno Pevkur predicted a long conflict and urged the West to stand with the Ukrainians until they achieve victory for "the free world".

“The consensus, more or less, is that it will take Russia two to four years to restore some capabilities or even capabilities similar to what it had” before the war, Estonian minister told roundtable in front of the press. Hanno Pevkur claims to have learned that the Russian arsenal had shrunk to the point that Russian forces were using the S-300 air defense system like ordinary missiles, and that some Russian shells were exploding before they even reached their target , due to their age.

Hanno Pevkur further warned reporters that Moscow still has the ability to carry out attacks, including on NATO members such as Estonia.