War in Ukraine: no peace negotiations before the withdrawal of Russian troops, according to Zelensky

No peace before withdrawal. 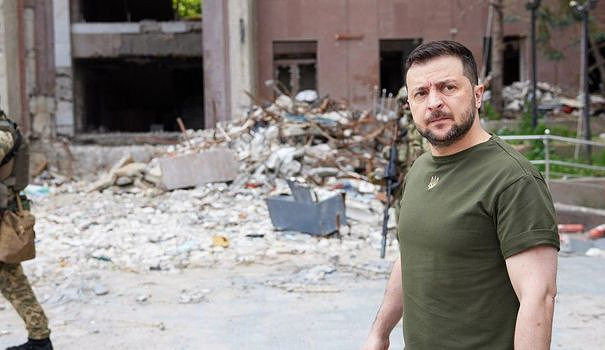 No peace before withdrawal. On Thursday, Ukrainian President Volodymyr Zelensky ruled out any peace negotiations with his Russian counterpart Vladimir Putin if the latter did not order the withdrawal of the troops currently occupying eastern and southern Ukraine. On the 177th day of war, the time is not for appeasement: the Russian control of the Zaporijia nuclear power plant crystallizes tensions following numerous shots within it. kyiv accuses Moscow of sending weapons there. For its part, Russia is recording more and more incidents around its ammunition depots, and accuses Ukraine of sabotage.

In a press conference organized in Lviv, a free zone in western Ukraine, the Ukrainian president once again showed himself to be intransigent regarding possible peace talks. "People who kill, rape, hit our civilian cities with cruise missiles every day cannot want peace. They should first leave our territory, then we'll see," Volodymyr Zelensky said, adding "not to do confidence in Russia".

Peace talks are at a standstill between the two countries, which have however managed to agree on the export of wheat through the Black Sea, and within the framework of specific humanitarian corridors. Russia continues to bombard southern and eastern Ukraine, areas it partially occupies. The towns of Izioum, Sievierodonetsk, Luhansk, Donetsk, Mariupol, Kherson are currently acquired by Russian forces, which are leading an attempt to "Russify" the populations there.

Two Russian villages were evacuated on Thursday because of a fire that broke out in an ammunition depot near the border with Ukraine, local authorities said. The incident happened near the village of Timonovo, 50 kilometers from the Ukrainian border, in the Russian province of Belgorod. "No casualties are to be deplored, but the inhabitants of Timonovo and the neighboring village of Soloti have been "moved to a safe distance", said the governor of the region, adding that the authorities were investigating the reasons for this fire.

This fire comes a few days after explosions on a military base and an ammunition depot located in Crimea, a Ukrainian peninsula annexed by Moscow. Russia recognized, in this last case, an act of “sabotage”. At the beginning of August, the explosion of ammunition intended for military aviation near the Saki military airfield caused one death and several injuries. In a sign that the situation remains explosive, Russian forces said on Thursday that they had shot down a drone near the airport in Sevastopol, the largest city in Crimea and headquarters of the Russian fleet in the Black Sea.

A Russian ship carrying stolen Ukrainian grain has arrived in Syria, the Ukrainian embassy in Lebanon said on Thursday, after several grain carriers caused controversy when they docked in the war-torn country. Ukraine regularly accuses Russia of ransacking and looting grain warehouses after the invasion of its territory by the Russian army. This cargo was initially destined for the Lebanese port of Tripoli, the embassy added, without specifying in which Syrian port the SV Konstantin docked. Another ship also unloaded its cargo on Thursday at the Syrian port of Tartous, run by a Russian company, according to Samir Madani, co-founder of TankerTrackers.com.

Since the beginning of the agreement allowing the export of cereals and fertilizers through the Black Sea, initialed last July, 25 cereal traders have been able to leave Ukrainian ports. UN Secretary-General Antonio Guterres has pledged his organization will work to "intensify" Ukrainian grain exports ahead of the onset of winter, as grain is crucial for Ukraine's food supply. many countries in Africa.

Russia announced on Thursday that it had deployed planes equipped with state-of-the-art hypersonic missiles to Kaliningrad on Thursday, in a context of heightened tensions around this Russian enclave surrounded by NATO countries, in the midst of a conflict in Ukraine. "As part of the implementation of strategic additional deterrence measures, three MiG-31s ​​with Kinjal hypersonic missiles have been redeployed to the Chkalovsk airfield in the Kaliningrad region," the Russian Defense Ministry said in a statement. a statement.

The three aircraft will form a combat unit "operational 24 hours a day", he added. The "Kinjal" ("dagger" in Russian) hypersonic ballistic missiles and "Zircon" cruise missiles belong to a family of new weapons developed by Russia and which its President, Vladimir Putin, describes as "invincible". because supposed to be able to escape the opposing defense systems. Russia has several times announced that it has used hypersonic missiles in real conditions as part of the large-scale offensive it has been leading since February in Ukraine.

The deployment of these missiles in Kaliningrad, an already highly militarized territory, comes against the backdrop of a showdown between the European Union and Moscow in recent weeks on this enclave located on the Baltic. In application of the EU sanctions decided in response to the Russian attack against Ukraine, Lithuania had ceased, in June, to authorize the transit through its territory of certain goods in the direction of Kaliningrad. After protests and threats from Moscow, the EU ended up asking Vilnius to authorize the transit by rail of Russian goods, excluding military equipment. Wedged between Poland and Lithuania, the territory of Kaliningrad is largely supplied by rail from mainland Russia.

Will the Zaporizhia plant be inspected by the international community? The International Atomic Energy Agency (IAEA) would be ready to go there, according to the declarations of the Ukrainian Minister of Foreign Affairs, Dmytro Kouleba, posted Thursday on Twitter. The day before, NATO Secretary General Jens Stoltenberg had deemed such an inspection “urgent”. Many shots were recorded inside the plant, raising fears of a nuclear incident, a "new Chernobyl", in the words of Turkish President Recep Tayyip Erdogan. While the UN Secretary General continues his tour of Ukraine by visiting the port of Odessa, Russia has denied installing "heavy weapons" inside the largest nuclear power plant in Europe.