War in Ukraine: "kamikaze drones" have targeted kyiv, according to the Ukrainian presidency

The European Union is stepping up its military support for Ukraine with the launch, on Monday 17 October, of a mission to train 15,000 Ukrainian soldiers on its territory and the granting of a new allocation of 500 million euros for the supply of arms. 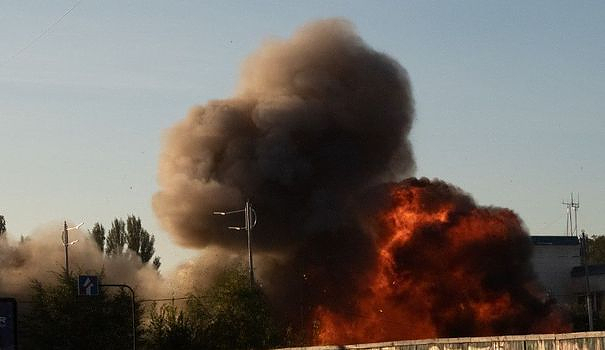 The European Union is stepping up its military support for Ukraine with the launch, on Monday 17 October, of a mission to train 15,000 Ukrainian soldiers on its territory and the granting of a new allocation of 500 million euros for the supply of arms. "This is a great first for the EU. We have never carried out a mission on this scale," commented a European official. The foreign ministers of the 27 member countries will endorse these two decisions at a meeting in Luxembourg. The mission will be immediately operational, we know from diplomatic sources.

Several training courses are already underway in various member states, notably in Germany and France, where Ukrainian soldiers are trained to use guns, missile launchers and anti-aircraft defense systems supplied by the Europeans. The Minister of the Armed Forces, Sébastien Lecornu, also announced on Saturday that France would provide "generalist training" of combatants to "up to 2,000 Ukrainian soldiers" on its soil. These training courses will be able to benefit from funding allocated by the European Peace Facility (EPF), the fund set up outside the European budget to help Ukraine militarily. Artillery, engineering units, radar: the needs of the staff of the Ukrainian armed forces are multiple and the European mission will supplement the training provided by the British and the Americans.

The Ukrainian capital was targeted early Monday morning by "kamikaze drone attacks", announced on Telegram Andriï Yermak, the chief of staff of the Ukrainian presidency, after a series of explosions which shook the district of Shevchenkiv, in the center. Several explosions were indeed heard around 6:35 a.m., 6:45 a.m. and 6:58 a.m., AFP journalists noted. After the first strikes, an AFP journalist saw one of these devices fall on a building, while two police officers on their knees tried to shoot it down with their service weapons.

This attack comes exactly one week after Russian strikes on the Ukrainian capital. On Monday, October 10, bombings on a scale unmatched for months had hit kyiv and other cities in Ukraine, killing at least 19 people and injuring 105, and sparking an international outcry. On Tuesday, Russia, which has recently suffered numerous military setbacks, continued its firing, on a smaller scale, striking in particular very far from the front the energy installations in western Ukraine. The shots had been carried out in retaliation for the explosion which partly destroyed the Russian Crimean bridge, of great strategic and symbolic importance.

The war in Ukraine and the resulting rise in the cost of living have pushed "four million more children into poverty" in Eastern Europe and Central Asia in recent months, warns a study by the United Nations Fund for the childhood (UNICEF) published this Monday. "An increase of 19% since 2021", says this study covering 22 countries, which underlines that children bear the greatest burden of the economic crisis caused by the conflict.

While children represent 25% of the population, they account for almost 40% of the 10.6 million additional people living in poverty this year. Russia, with 2.8 million additional children entering poverty, concentrates almost three quarters of the total increase measured by Unicef. Two factors explain this situation: Russia has a large population and Unicef ​​estimates that the country's GDP will fall by 8%, the second largest drop among the countries included in the analysis. Meanwhile, Ukraine is home to half a million more children living in poverty, which places it second, followed by Romania with 110,000 more children, according to the study.

French President Emmanuel Macron on Sunday called on Germany for European "solidarity" in the face of soaring energy prices, warning against the "distortions" of competition to which the massive German plan to help households and individuals could drive. "We cannot stick to national policies because that creates distortions within the European continent," he said in an interview with the daily Les Echos on Monday.

The government of Olaf Scholz, accused of going it alone with its 200 billion euro support plan to protect its households and businesses, is under pressure from several EU partners to accept more financial solidarity. The leaders of the European Union will strive, at a summit Thursday and Friday in Brussels, to find a common response to the soaring energy prices caused by the war in Ukraine. "There is European solidarity with regard to Germany and it is normal that there is solidarity from Germany with regard to Europe!" Insisted the French president.