War in Ukraine: how is the battle of Kherson preparing?

The Russian military will defend their capture of Kherson "until the death", the head of the occupation administration, Vladimir Saldo, warned on the Rossiya 24 television channel. 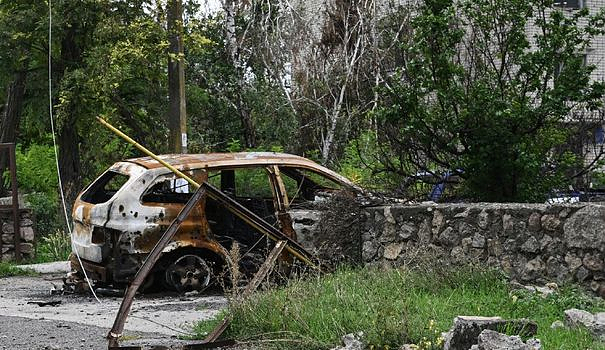 The Russian military will defend their capture of Kherson "until the death", the head of the occupation administration, Vladimir Saldo, warned on the Rossiya 24 television channel. He added: "The whole city will be held ." Faced with the advance of Ukrainian troops who are retaking localities in the east of the country over the weeks, the Russian forces are expecting a bloody confrontation and a strategic battle. There is no question of losing more ground for the Russian General Staff. During a Security Council, Vladimir Putin announced, this Wednesday, October 19, to have signed the decree imposing martial law in the four occupied territories. It will come into force on Thursday in the streets of Kherson and other invaded cities. The administrative capital of the oblast of the same name is a choice catch for the Russian invader: it is the largest metropolis under the yoke of the occupier.

Its maintenance in the bosom of Russia is all the more important in the ranks of the Kremlin as the recent military dynamic is marked by successive setbacks. Since September, Vladimir Putin's army has been routed, prompting him to declare the partial mobilization of his population. On Tuesday, an unprecedented fact, the commander of the Russian forces in Ukraine, Sergei Surovikin, recognized a "tense" situation on the front. "The enemy is not giving up its attempts to attack the positions of Russian troops," said the man who has been in charge of operations for ten days. Moscow expects an imminent arrival of Ukrainian forces at the foot of the city.

The occupation authorities thus moved "all the power structures" of the city, namely the civil and military administration as well as all the ministries, to the left bank of the metropolis. Earlier, they had announced the start of the evacuation of civilians. “It is planned to evacuate 50,000 to 60,000 people,” said Vladimir Saldo on the pro-Kremlin Telegram channel “Solovyov Live” quoted by Russian press agencies.

The images of residents of Kherson joining the evacuation ferries followed one another on the screens of Russian televisions. At a rate of 10,000 people per day, the operation should last six days. A way also for Russia to continue its policy of annexation of the region. After having ratified by decree the attachment of Kherson and three other occupied territories to Russia, the Kremlin intends to conquer the minds.

Vladimir Putin's views are not lost on his counterpart, Volodymyr Zelensky. The Ukrainian head of state accuses his neighbor of "trying to scare" the inhabitants of Kherson with these announcements. In particular, he accuses his rival of spreading false information such as the prospect of a bombardment through loops of e-mails very often taken up by the inhabitants of the region. An informational war that serves as a strategic form of fear. Russian General Sergei Surovikin retorts that the Russian army would "first and foremost ensure the safe evacuation of the population" from Kherson.

Beyond the accusatory words of both sides, the strikes continue in other cities of Ukraine. Since Monday, Russian bombings have targeted several strategic areas such as energy infrastructure in kyiv. Explosions were heard in the center of the capital, the alarm siren was sounded. More than 1,000 localities are currently without electricity and heating while temperatures fall below 10 degrees in several regions.