War in Ukraine: even "more severe" power cuts are to be expected, according to kyiv

The days go by and the Russian strikes on the electrical installations continue. 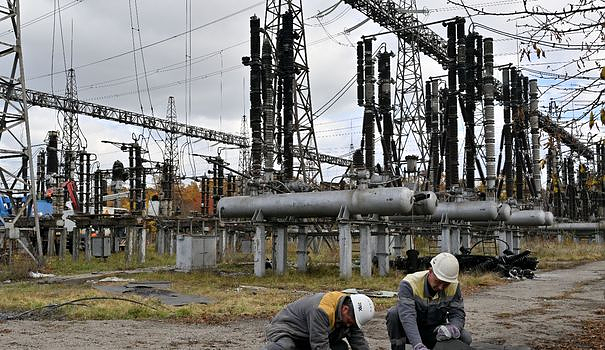 The days go by and the Russian strikes on the electrical installations continue. The networks are heavily damaged and the Ukrainian authorities announced on Friday that at least four million people, particularly in the kyiv region, are without electricity. An "unprecedented" figure, we are assured in kyiv. "In many cities and districts of our country, cuts have been introduced to stabilize" the situation of fuel poverty, insisted on explaining the head of state, Volodymyr Zelensky. "Unfortunately, more severe and longer cuts will be put in place in the coming days," warned the Ukrainian operator DTEK.

275 million dollars: this is the amount of the new tranche of military aid from the United States brought to Ukraine. The country led by Joe Biden intends in particular "to meet the urgent security and defense needs of Ukraine", said during a press briefing a spokesperson for the American Department of Defense, Sabrina Singh.

This 24th installment of direct assistance is particularly strategic. For the first time, satellite antennas, drawn from the stocks of the American army, will be delivered to kyiv. “We see Ukrainian infrastructure and power grids being targeted by the Russians, and these antennas provide additional capacity on the ground at a crucial time when Ukraine's infrastructure is hit,” the spokesperson said.

Washington should also send precision missiles for the Himars artillery systems, as well as additional shells, compatible with the systems already delivered to Ukraine. A variety of ammunition and anti-tank armaments are added to the long list of American weapons already in the hands of Ukrainian soldiers. The new salvo brings the amount of total aid from the United States to $17.9 billion since the start of the Russian offensive on February 24.

Russia has completed the mobilization of 300,000 reservists in just over a month, Russian Defense Minister Sergei Shoigu announced on Friday (October 28th) during a televised exchange with President Vladimir Putin. "The task of recruiting 300,000 people has been accomplished," the minister said on Russian television, sitting opposite Vladimir Putin, adding that 41,000 of them are already deployed in military units in Ukraine. The Russian president hailed the "patriotism" of the mobilized soldiers.

Fighting continues in Kherson and is of high intensity. The proof: the leader of the Russian republic of Chechnya, Ramzan Kadyrov, whose forces are fighting in Ukraine, announced on Friday the death of 23 of his soldiers in a Ukrainian bombardment. The latter would also have injured 58 people.

Elsewhere on the front, Ukrainian authorities have confirmed Russian shelling. In Mykolaiv, in the South, two apartment buildings and a bakery in Mykolaiv were damaged. For its part, the Kremlin accuses its enemy of sponsoring a so-called "dirty" operation, that is to say an explosion containing radioactive elements. Kyiv denied. His Western backers call the Russian allegations "absurd".

UN Secretary General Antonio Guterres on Friday called on "all parties" to make "every effort" to extend the deal on Ukrainian grain exports. The so-called Black Sea Agreement, signed on July 22 by the UN, Ukraine, Russia and Turkey, has allowed the export of more than 9 million tonnes of Ukrainian cereals and relieved the world food crisis caused by the war. But the uncertainty as to its extension wins the international community.

The initial duration of the agreement on Ukrainian exports "is 120 days and can be automatically extended, from November 19, if no party objects", noted in a press release Stéphane Dujarric, spokesperson for Antonio Guterres. . But Moscow complains of not being able to sell its production and its fertilizers because of Western sanctions affecting the financial and logistics sectors in particular. This could lead it to review the conditions of its adherence to such a text. US Secretary of State Antony Blinken has warned that Vladimir Putin's country would expose itself to "great anger" from many countries that profit from Ukrainian grain if it withdraws from the Black Sea agreement.

A few hundred kilometers from the Ukrainian front, another region of the Caucasus is weakened by a hotbed of tension between Azerbaijan and Armenia. Armenia, an ally of Russia, and Azerbaijan, backed by Turkey, have clashed in two wars over the past three decades for control of Nagorno-Karabakh, a region disputed by the two states. The last war, in the fall of 2020, left 6,500 dead and ended in a ceasefire mediated by Russia, which did not reduce the pressure. Despite the presence of Russian army emissaries on Azeri soil, the situation remains unstable. In September, at least 286 people were killed in fresh border clashes.

Despite its massive involvement in Ukraine, Moscow is keen to play a mediating role between the two countries. And, "at the initiative of the Russian side", tripartite talks are to be held on October 31 in Sochi. Russian President Vladimir Putin will host Azerbaijani President Ilham Aliyev and Armenian Prime Minister Nikol Pashinyan. The purpose of such a meeting? Adopt "measures" aimed at "strengthening stability and security in the region" of the Caucasus, shares the Kremlin in a press release.