Ukraine garnered pledges of support in the face of Moscow on Saturday, the 90th anniversary of the Holodomor, the famine deliberately caused by the Stalinist regime in the 1930s, which has acquired new resonance since the Russian invasion. 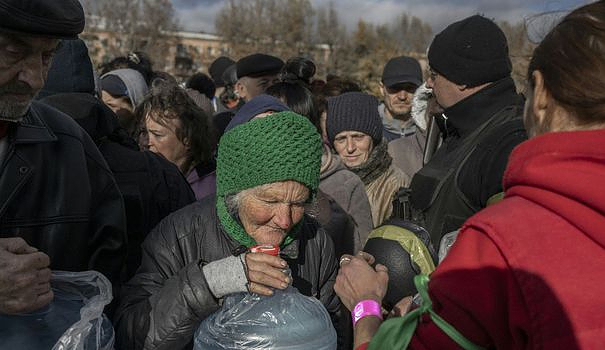 Ukraine garnered pledges of support in the face of Moscow on Saturday, the 90th anniversary of the Holodomor, the famine deliberately caused by the Stalinist regime in the 1930s, which has acquired new resonance since the Russian invasion. Ukrainian President Volodymyr Zelensky has assured that his people will hold their ground in the face of Russian attacks, which regularly cause massive power and water cuts as winter temperatures set in.

“Ukrainians have been through really terrible things. And despite everything, they have retained the ability not to submit and their love of freedom. Once they wanted to destroy us with hunger, today with darkness and darkness. cold," he said in a video posted on Telegram. "We can't be broken."

Nicknamed "the granary of Europe" for the fertility of its black soils, Ukraine lost four to eight million inhabitants in the great famine of 1932-1933, orchestrated according to historians by Stalin to suppress any desire nationalist and independentist of this country, then Soviet republic. This drama is officially considered a "genocide" by kyiv and several Western countries, a term fiercely rejected by Moscow. On Friday, the German Parliament also took the decision to define the Holodomor as "genocide".

Several European leaders made the trip to kyiv on Saturday for the Holodomor commemorations. The Prime Ministers of Poland and Lithuania, two of Ukraine's closest supporters, Mateusz Morawiecki and Ingrida Simonyte, thus spoke with their counterpart Denis Chmygal. The three leaders issued a joint statement after the meeting emphasizing their continued support for Ukraine and denouncing Russia's actions.

For the first time since the start of the Russian invasion, Belgian Prime Minister Alexander De Croo also visited kyiv. According to the Belga agency, it provides additional financial support of 37.4 million euros to Ukraine, in particular to help the population cope with winter in a context of power cuts. German Chancellor Olaf Scholz announced in a video additional aid of 15 million euros to support Ukrainian grain exports, disrupted by the war.

As for French President Emmanuel Macron, he also promised an additional 6 million euros for these exports, which are vital for the supply of many countries in Africa and Asia. "We have chosen to act in solidarity with the most vulnerable countries. Russia continues to use hunger as a means of pressure and food as a weapon of war," he said in a message. . Same story from the side of the President of the European Commission, Ursula von der Leyen, who also promised the support of the EU by accusing Russia of "using food as a weapon".

Prisoner exchanges between Russia and Ukraine continued on Saturday, with 12 people released on the Ukrainian side. Moscow, for its part, announced that it had recovered nine of its men. In Dnipro, in central Ukraine, a Russian bombardment left at least 13 injured, according to regional governor Valentin Reznitchenko. Another strike on Chassiv Iar, in the east, left at least one dead and two wounded, the regional prosecutor's office said.

In the capital, where part of the population has spent the last three days without electricity after massive Russian strikes on Wednesday, the municipality has announced that it has restored 75% of the power supply and 90% of the heating, as temperatures approach zero degrees Celsius and that heavy snowfall is expected from this Sunday. Sergey Kovalenko, chief operating officer of Yasno, which provides energy to kyiv, said residents should have at least four hours of electricity a day.

The Faroe Islands, a Danish autonomous territory in the North Atlantic which is not part of the European Union, have extended their fishing agreement with Russia for another year, despite the war in Ukraine, their fisheries minister said on Saturday. , recalling to condemn "all forms of war - also the war in Ukraine". Since 1977, this agreement, renewable annually, has covered catch quotas for several species (notably cod, haddock, whiting and herring) in the Barents Sea for Ferigian sailors and in the waters off the islands Faroe Islands for Russians. According to the Ministry of Fisheries, the proceeds of the agreement constitute 5% of the GDP of the Faroes.

Russia has been one of the territory's main trading partners since the conflict between Iceland and Faroe Islands and the EU over mackerel and herring quotas between 2010 and 2014. The European embargo on Faroese fish had then pushed the archipelago to explore other markets. "Today we only have free trade agreements with six countries - and not with the EU", stressed Minister Jyllands-Posten Árni Skaale. "If we cut ourselves off from one of the markets we have agreements with, it could be problematic for the whole next generation. That's why it rings so hollow when European politicians say we should just stop cooperating with the Russians “, he defended.

However, the Faroese government warned during the week that it intended to consider alternatives to this agreement after the elections scheduled for December 8. At the end of October, neighboring Norway and Russia had agreed on fishing quotas in the Barents Sea for 2023.