War in Ukraine: after the leaks, the West suspects the sabotage of Nord Stream

This Monday, two seismic disturbances similar to explosions were recorded in the Baltic Sea. 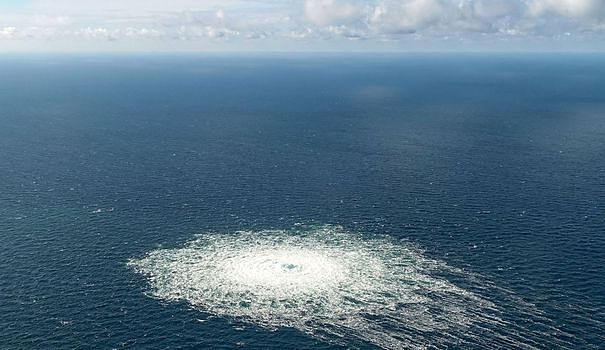 This Monday, two seismic disturbances similar to explosions were recorded in the Baltic Sea. Then the gas pipelines linking Russia to Europe began to leak, triggering suspicions of "sabotage" in the West. No one except kyiv blames Moscow, but all eyes are on the Kremlin. In addition, on Tuesday 27 September, the pro-Russian authorities demanded an almost unanimous "yes" to the annexation referendums organized in four regions of Ukraine, recalling the scenario of the annexation of Crimea in 2014, also resulting from a scabrous poll.

On Monday, a sharp drop in pressure was detected in Nord Stream 1 and 2, the gas pipelines which before the war in Ukraine supplied Europe with Russian gas. These two pipes suddenly started releasing methane gas off the Danish island of Bornholm, between southern Sweden and Poland. So much so that the sea is boiling nearby. A simple accident, unrelated to the diplomatic confrontation between the West and Moscow? The Kremlin drew first, expressing its "concerns".

European leaders have let it be known - often half-heartedly - that they too suspect "sabotage". "It is paramount to investigate the incidents and shed full light on the events (...). Any deliberate disruption of Europe's active energy infrastructure is unacceptable and will result in the strongest response possible," Ursula said. von der Leyen, President of the European Commission. It must be said that such leaks are unprecedented. And the Swedish seismic institute, like its Norwegian and Danish counterparts, recorded two underwater explosions, "most likely due to detonations", before the incident. In kyiv, the adviser to the Ukrainian presidency, Mykhaïlo Podoliak denounced "a planned terrorist attack" by Moscow, without providing evidence.

A yes, almost unanimous. This Wednesday, Russia claimed scores to the Soviet, or to the North Korean at the end of the referendums of annexation organized in Ukraine. Up to 97% and 98% membership in separatist-held regions, Lugansk and Donetsk; a little less in Zaporizhia and Kherson. Westerners unanimously condemned a "masquerade". After this annexation, which resembles that of Crimea in 2014, all eyes are on the future.

Ukrainian President Volodymyr Zelensky assured Tuesday evening in a video posted on Telegram that Ukraine would act "to defend its people". The Russian Parliament must vote within days on a treaty formalizing the integration of the four regions into Russian territory. President Vladimir Putin could deliver a speech as early as September 30. The G7 has vowed to "never recognize" the results and Washington has promised a "severe" response through economic sanctions. The United Nations reiterated on Tuesday its support for "the territorial integrity of Ukraine".

kyiv cannot hold talks with Moscow after annexation "referendums" were held in four Ukrainian regions, Ukrainian President Volodymyr Zelensky has told the UN. "Russia's recognition of the 'pseudo-referendums' as 'normal', the implementation of the (same) scenario as in Crimea and yet another attempt to annex part of Ukrainian territory means that we do not have to discuss with the current Russian president", he detailed. According to him, Russia should therefore "be excluded from all international organizations" for these actions, or at least be suspended from them.

A dialogue will however be necessary to end the war in Ukraine, but the time has not "come yet", estimated Tuesday the French Minister of Foreign Affairs on BFM TV. "No one can say when this war will end. What is certain, however, is that for it to end, there needs to be a better balance of power between Russia and Ukraine" , she added from Kyiv, where she paid a visit on Tuesday. A "rebalancing" of forces in favor of kyiv would take place thanks to the Ukrainian counter-offensive, according to her. Three weeks after a dazzling breakthrough in the northeast which allowed them to regain thousands of square kilometres, the forces of kyiv are maintaining pressure on the Russian army in the Donbass, which Russia wants to completely annex.

Russian citizens were 30% more numerous last week to enter the territory of the European Union, compared to the previous week, announced Tuesday the European Border Agency, Frontex, based in Warsaw. “Around 66,000 Russian citizens entered the EU in the past week (19-25 September),” said a Frontex statement. Most entered through Estonia and Finland. The majority of Russian entrants hold a residence permit or visa valid in EU or Schengen member countries, others have dual nationality.

This increase comes as Vladimir Putin has decreed the mobilization of reservists in Russia and part of Europe is shutting down. Estonia, Latvia, Lithuania and Poland began “as of September 19 to put in place entry restrictions for Russian citizens traveling solely for tourist or leisure purposes”, recalls Frontex. Since the start of the Russian invasion of Ukraine, more than 1,303,000 Russian citizens have entered the European Union through its land borders. At the same time, more than 1,273,000 Russian citizens have returned to Russia via its land borders with the EU, according to Frontex.

Financial institutions pledged on Tuesday to reduce the rates for Ukrainian money transfers for the duration of the war for their relatives back home, a statement welcomed by the European Commission. Sixteen establishments, including Mastercard, Visa, Raiffeisen Bank and Extrabanca have signed a joint declaration in which they undertake to "voluntarily reduce the total amount of fees, converging towards the objective of 3%" of the amounts transferred.