War in Ukraine: a new drone attack targets the staff of the Russian fleet in Crimea 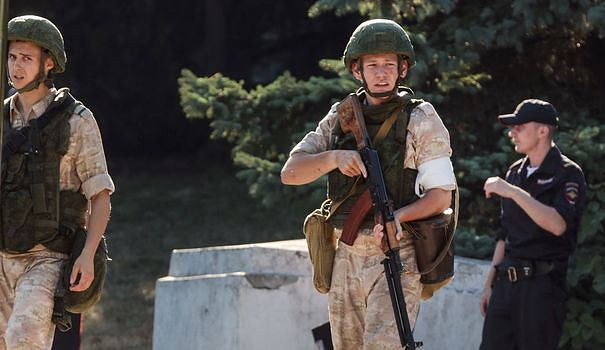 While Russian offensives continue, particularly in eastern Ukraine, Ukrainian forces no longer hesitate to counter-attack, even targeting Russian territories. A drone attack was foiled in Crimea on Saturday, the 179th day of the war. Others have reached their target in recent weeks. Boosted by US weapons, Ukraine is reaping valuable victories, but worries about Russian strikes near its nuclear power plants. One of them was reportedly targeted on Saturday. The UN, which multiplies the calls to protect these sites, is now turning to Russian exports of agricultural products. According to the organization, there is an urgent need to let Russian fertilizers through, which are essential for the next harvest.

A drone attack on Saturday targeted the headquarters of the Russian Black Sea Fleet in Sevastopol, without causing injuries, said the governor of this city of the annexed peninsula of Crimea, Mikhail Razvojayev. “The drone was shot down just above the Fleet Headquarters, it fell on the roof and caught fire,” he wrote on Telegram, before rejecting responsibility for the attack. on Ukrainian forces.

This is the second drone attack against the Russian Black Sea Fleet headquarters in less than a month. On July 31, a drone landed in the courtyard of the building, injuring five of its employees and causing the cancellation of all the festivities planned for Russian Fleet Day celebrated on the same day. This new attack comes as explosions and attacks targeting Russian military infrastructure are increasing in Crimea, and the United States is now supplying weapons that can reach Russian defense systems on its national territory.

The specter of catastrophe, again. Twelve Ukrainians were injured on Saturday in a Russian bombardment in Voznesensk, a town not far from a nuclear power plant in the south of the country, Ukrainian authorities said. They again accuse Moscow of "nuclear terrorism", while a visit to the Zaporizh plant by the IAEA must be planned to verify that the shootings on this other installation, the largest in Europe, did not have it too affected.

This strike in an area of ​​30 kilometers around the plant "is a new cynical act of nuclear terrorism by Russia", accused on Telegram the operator of Ukrainian nuclear power plants, Energoatom. "It is not excluded that this missile was fired in the direction of the Pivdennoukrainsk power plant, which the Russian military already tried to seize at the beginning of March", accused Energoatom.

The strike hit a residential building and several houses in Voznesensk, where around 30,000 people live, the state emergency service said on Facebook, posting images of a gutted building. The Mikolaiv region, which regularly suffers heavy Russian bombardments, is close to that of Kherson, almost entirely occupied by Russian troops since Moscow launched an attack on Ukraine at the end of February.

A suspected attack near Moscow killed the daughter of ultranationalist ideologue Alexander Dugin on Saturday. Darya Dougin died in the explosion of the Toyota Land Cruiser in which she was traveling, Moscow police said in a statement. Images posted on social networks show Alexandre Douguine, his father, in shock, in front of the smashed passenger compartment, surrounded by fragments of bodywork. He might have been the target of terrorists.

A champion of anti-liberal, anti-Western and anti-modern thought, the philosopher partly shaped the ideological matrix and the Weltanschauung ("worldview") of the Russian military, the Moscow political elite and indirectly influenced Vladimir Putin himself. Promoter of the "eurasist" doctrine, a sort of alliance between Europe and Asia under Russian leadership, Alexandre Douguine, adored by part of the French far right, has been targeted since 2014 by EU sanctions. taken in the wake of the annexation of the Ukrainian Crimean peninsula by Russia.

No grain without fertilizer. Last July, Ukraine and Russia agreed to save their cargoes of wheat and agricultural equipment transiting the Black Sea, in order to guarantee exports and thus calm the world food crisis. According to the UN, Russian products are still struggling to reach their destination, at the risk of harming future harvests. "Without fertilizer in 2022, there may not be enough food in 2023. Getting more food and fertilizer out of Ukraine and Russia is key to calming markets...and driving down prices for consumers," said UN Secretary General Antonio Guterres on Saturday in Istanbul.

These agricultural products must be able to access world markets "unhindered", at the risk of a world food crisis from next year. “It is important that governments and the private sector cooperate to get them to market,” he said from the Joint Coordination Center (JCC), which oversees the application of the export agreement. of Ukrainian cereals signed in July by kyiv and Moscow under the aegis of the UN and Turkey.

At the same time, the UN secretary general promised on Thursday that his organization would try to "intensify" Ukrainian grain exports before the onset of winter, as these are crucial for the supply food in many African countries. Under the agreement signed in July, 650,000 tons of Ukrainian grain and agricultural products have left the Ukrainian ports of Odessa, Chornomorsk and Pivdenny since August 1.