War in Ukraine: a national holiday under close surveillance

On this Wednesday, August 24, Ukrainian national holiday, tension is extreme throughout the country. 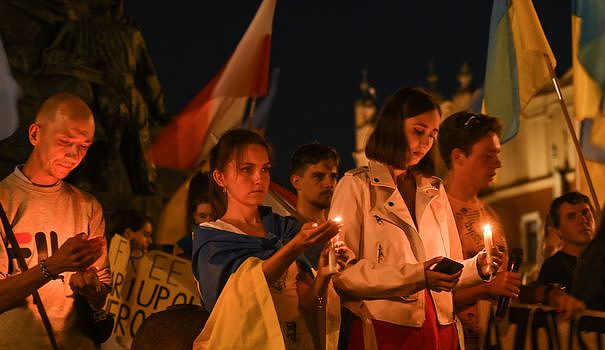 On this Wednesday, August 24, Ukrainian national holiday, tension is extreme throughout the country. A few days after the assassination of Daria Douguina, daughter of the ideologue Alexandre Douguine, kyiv fears cruel reprisals on this symbolic day. Six months to the day after the launch of the Russian invasion, the United States announced, for their part, the delivery of military aid of three billion dollars, the highest ever granted to kyiv.

In the context of war, "to celebrate" the day of independence from the USSR, made official on August 24, 1991, is not really the right verb. Especially since most of the country's inhabitants will be confined: the kyiv authorities having banned all public gatherings from Monday to Thursday in the capital, while the governor of the Kharkiv region ordered a curfew from Tuesday evening to Thursday morning. "We must be aware that on Wednesday repulsive Russian provocations and brutal strikes are possible," warned the Ukrainian president on Tuesday evening, before adding that his country would respond "to any manifestation of Russian terrorism".

Volodymyr Zelensky had already advanced last Saturday that "Russia could try to do something particularly disgusting, particularly cruel", on the occasion of the Ukrainian national holiday. Very early this morning, explosions have already been reported in several cities, such as Kharkiv, Zaporizhia and Dnipro, according to local authorities.

After six months of war, the United States is expected to announce new military aid of around three billion dollars to kyiv. This will be the largest envelope of military aid granted by Washington since the beginning of the conflict. The money comes from a Pentagon fund that can be used either for immediate operations or to fund training. This envelope is different from another fund, which allows President Joe Biden to order the immediate transfer to Ukraine of weapons, materials and equipment from existing stocks.

On Friday, aid of this second type was announced by the United States, for an amount of 775 million dollars. This notably includes missiles for the American Himars precision artillery systems, which are of paramount importance on the battlefield.

This Tuesday, the Europeans reaffirmed their support for kyiv at the summit of the "Crimean platform", which brings together the main allies of Ukraine, and which already existed before the invasion of February 24. French President Emmanuel Macron has urged the international community not to show "any weakness, any spirit of compromise" in the face of Russia. The Europeans are ready to support Ukraine's "fight" "for the long term", he added to the attention of Volodymyr Zelensky.

"We will never recognize any attempt to change the status of any part of Ukraine whatsoever," insisted German Chancellor Olaf Scholz, whose country will deliver new weapons to kyiv for around 500 million euros. British Prime Minister Boris Johnson said European countries should "continue to provide Ukraine with the necessary economic aid until Russia withdraws its troops from all over Ukraine".

The head of Russian diplomacy Sergey Lavrov called on Tuesday to have "no mercy" for the murderers of Daria Dougina, daughter of a pro-Kremlin imperialist ideologue, killed in an attack and whose funeral brought together hundreds of people. "It was a barbaric crime for which there can be no forgiveness. There can be no mercy for the organizers, the sponsors and the performers", reacted this Tuesday the Russian Minister of Foreign Affairs.

Journalist and political scientist, Daria Douguina was killed on Saturday evening in the explosion of the vehicle she was driving on a road near Moscow. It seems that the target of the attack was his father, Alexander Dougin, an ultra-nationalist philosopher and writer. Both were returning, in different vehicles, from a conservative cultural festival held in the Moscow region when the explosion occurred. Less than 48 hours after his death, Russian security services claimed that the attack had been planned and carried out by a woman working for the Ukrainian secret service, which President Zelensky denied.