Volleyball World Cup: the Blues stop in the quarters

Thus ends, even before the last four, the dream of the Blues to win the first tricolor volleyball world champion title, the only one missing in the trophy cabinet, topped with a Euro (2015) and the Olympic gold, brought back from Tokyo last summer. 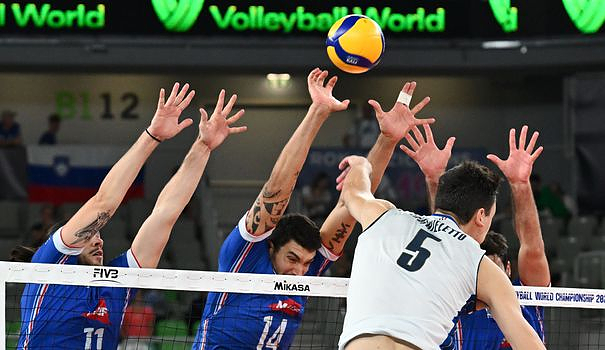 Thus ends, even before the last four, the dream of the Blues to win the first tricolor volleyball world champion title, the only one missing in the trophy cabinet, topped with a Euro (2015) and the Olympic gold, brought back from Tokyo last summer.

This is the second time in a row that France has missed the last four of a World Cup, since it had not passed the second group stage during the previous edition, in 2018.

It is also the second time in a row that France has not seen the semi-finals of an international competition (excluding the League of Nations, won in July): it had taken the door to the Euro in September 2021 from the 8th final (3-0) against the Czech Republic.

Brazilian Bernardinho was on the bench, replacing Olympic champion Laurent Tillie before suddenly resigning in March for personal reasons.

He was replaced by Italian legend Andrea Giani, whose main leitmotif was to bring consistency to the Blues, so that they stop doing the roller coaster in competition, to alternate top performances and early exits from the roads. .

It failed this time. On a thread since the start of the competition, with a stunning victory against Slovenia in the pools (3-2) then this round of 16 won by forceps against Japan, the "Team Yavbou" gave in.

This young, ambitious and talented Italy imposed its law in counter and attack, led by its 20-year-old nugget Alessandro Michieletto (14 pts) and the sharp Yuri Romano (22 pts), in a fairly bare but acquired Stozice Arena to the Italian cause. Many supporters, in fact, had made the trip from neighboring Italy.

The Italians had benefited from two more days of recovery, qualified on Saturday by eliminating Cuba (3-1).

Did it play? The French in any case weakened at the end of the match: while they were leading two sets to one and 14 to 12 in the fourth set, they lost the thread a little to let Italy snatch a tie-break.

During which they hoped to make a crazy comeback: trailing 13 to 6, they came back to two lengths (13-11), thanks to a pair of victorious blocks (counters) and an attack from Earvin Ngapeth.

Before saving a match point but losing on the second. The Italians, largely beaten in front of their public in Bologna in the semi-finals of the League of Nations in July (3-0), took their revenge.

The Blues may regret the absence due to injury of their receiver-attacker Kévin Tillie, touched against the Japanese.

Tillie, who had been the man of victory against the Slovenians in chickens, would undoubtedly have been precious on Wednesday in the relay of Trévor Clévenot, once again in failure in attack (4 pts at 27% success).

Earvin Ngapeth (15 pts at 32% success rate) for his part delivered a performance below his usual standards, in service (only 1 ace) and in attack.

Where, like his partners, he sometimes suffered against the block of the Italians (10 points on counterattacks), who will face Slovenia or Ukraine on Saturday in Katowice in Poland. The Blues, they return home a little earlier than expected.