Visit the pharaoh in Cairo - before it's too late

Dust glitters in the air. 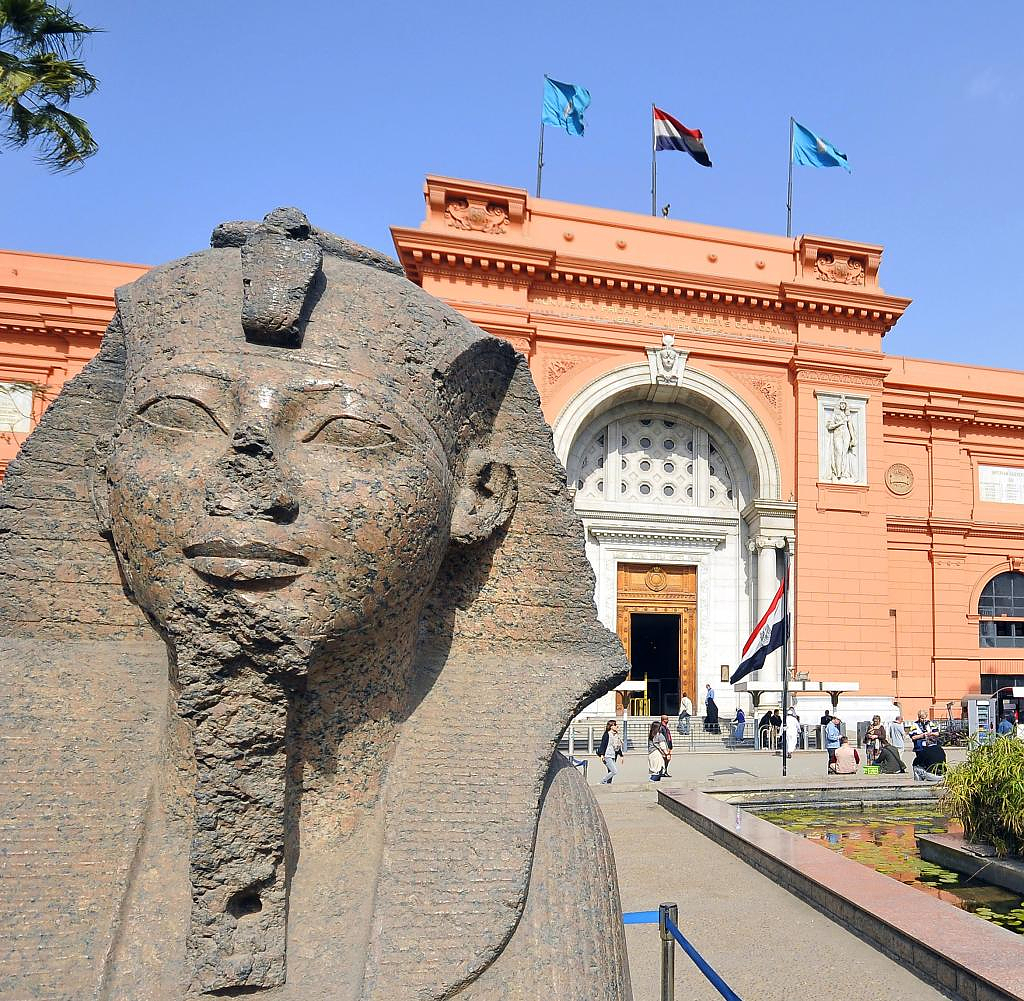 Dust glitters in the air. He hovers between the milky glass dome and the old wooden showcases and doesn't care about the beeping of the security barrier, the jostling of people and the babble of voices. The statues with glittering gemstone eyes also look unperturbed from their showcases. Jewelry and jewels shine everywhere, you pass mummies, sarcophagi and false doors. A strange world long gone. She lives on in the Egyptian Museum in Cairo.

The museum is the first address for lovers and researchers of Egyptian art, more than 150,000 artefacts from all eras of the Pharaonic period are preserved here. But now this time is coming to an end: the museum is being cleared out. At the other end of Cairo, the new $1 billion Grand Egyptian Museum is scheduled to open in 2023.

In future, the highlights of Egyptian culture will be presented opposite the Pyramids of Gizeh. In a bombastic "Mummy Parade" last year, 22 mummies were brought to the new museum in special vehicles with a cannon escort and a music show through the middle of the Egyptian capital. 15,000 artefacts have also been shipped from the old to the new museum.

There they will find a new home in the future on an exhibition area the size of almost four football pitches. The spectacular museum, with its triangular plan, translucent alabaster facade and fig tree-shaded forecourt, is dubbed "Egypt's gift to mankind" by local officials. The design comes from the Berlin-based architectural office Heneghan Peng.

Finally, the treasures of the past should be presented in a modern and multimedia way - and tourists should be able to find their way to antiquity without dust, traffic jams and hustle and bustle. The subway will be expanded for this purpose. And the motorway, just like the Sphinx International Airport west of Gizeh, has been expanded for international and national air traffic.

From 2023 at the latest, fans of antiquity should be able to land directly at the Sphinx Airport and drive from there to the new Egyptian Museum - and then fly on in one to two hours towards Luxor or Aswan to visit other temples, tombs and archaeological sites on a Nile cruise. Antiquity totally! "The old museum will first be closed and renovated," says Lotfy Abdelhamid, Vice President of the Egyptian Museum.

This means: If you want to see it again, you should soon go to the historic house on Tahrir Square in central Cairo. Quickly enjoy the charm of the old, dusty wooden showcases again, watch the dark red wall paint peeling off and the glittering grains of dust dancing in the air. Everything is wonderfully old-fashioned here, the exhibits are not introduced by soulless audio or video guides, but explained by human guides.

Since 1902, scientists have been bringing the finds of numerous excavations from the temples and tombs of the ancient Egyptians here. The world's largest collection of Egyptian art is housed in more than 100 halls spread over two floors.

How many artefacts have been presented to the public over the decades and how many treasures of antiquity still lie dormant, completely unexplored, in the 10,500 square meter storage area of ​​the museum, nobody really knows. A first inventory was already carried out from 2004 to 2010, but as the deputy museum director notes only half-jokingly: "We don't need an inventory here, we need a new excavation."

It would be worth it - because the interest of travelers in the pharaohs is huge, the corridors and rooms of the museum are always packed. For 120 years, millions of visitors have walked the steps of the marble staircase and marveled at the treasure of antique statues made of wood, granite and gold, death masks, brooches, clasps, friezes, stretchers, models, sarcophagi and of course the mummies on display.

Countless museum visitors have admired the 4,500-year-old statue of an ancient scribe who appears to be listening cross-legged to a narrator, his glassy eyes sparkling curiously and mysteriously in the light of a tourist guide's smartphone flashlight. You have passed the copy of the Rosetta Stone, which can be considered "Langenscheidt for Pharaonic" and the almost five meter high statue of Ramses II, the most famous and powerful of all pharaohs known to us.

In view of the wealth of impressive exhibits, many visitors have probably only had a careless glance at the ivory figure of Pharaoh Cheops, which is only 7.5 centimeters in size, the only reliable image of the builder of the Great Pyramid of Giza. We also passed the treasures that the ancient Egyptians created from 4000 BC, at a time when people in Europe still lived in stilt houses, were proud of wooden plank paths and Ötzi in fur and with bow and arrow met a violent death found Alps.

Anyone who makes it to the first floor of the museum stands in front of what is a stroke of luck in history for tourist guide and Egyptologist Abdulnaby Helmy: the grave goods of a politically relatively unimportant ruler. "Here we see before us the treasure of a king who - as far as his deeds were concerned - was quite insignificant: Tutankhamun."

Because the ruler neither waged wars nor, like his father Akhenaten, installed a new faith. Instead, he secured his empire rather poorly than right, was exploited by the Amun priests according to contemporary interpretation (they replaced the prevailing Aten belief with the god Amun) and died young after only nine years of reign.

This secondary pharaoh owes his fame to the British Howard Carter, who, after a long and unsuccessful excavation work, undertook an expedition to the Valley of the Kings in 1902, financed by Lord Carnarvon. When a water jug ​​fell over in the blistering heat, Carter's workers realized that the water was seeping into the ground in an unusual way. An indication that an artificial structure was hidden in the stony ground: the tomb of the young pharaoh had been found. The treasure was taken to Cairo, as was Tutankhamun's now world-famous gold mask.

But the king himself, his mummy, still lies in his burial chamber in the Valley of the Kings. To get there, to the tomb labeled KV62, you fly from Cairo to Luxor in just over an hour. Mountains, dunes and dry river valleys roll beneath the plane in brown, grey, ocher and yellow. The Nile is now just a thin ribbon, lined with lush green fields and palm trees. Sand dusts over the runway and turns the air yellow.

An hour's bus ride from Luxor, past shabby fields, donkey carts and dilapidated brick buildings, is Howard Carter's former home; today a small museum is housed here. A few steps further, in the middle of nowhere, a short tunnel leads down into the ground to a reconstruction of KV62. Four rooms, a replica sarcophagus and photos from the excavation.

Italian scientists have used a radar to peer into the meter-thick walls of the pharaoh's tomb.

The rush of visitors who want to visit a real burial chamber is great. “However, the tomb itself, higher up in the mountains, is not always open,” explains Egyptologist Helmy. "If one of the tombs becomes too damp due to the breath and sweat of the visitors, it is closed - and another one is opened for this purpose." Of the 64 burial chambers, only ten can be visited at a time.

The visit is still worthwhile, even if Tutankhamun is not giving an audience and his treasure is in Cairo. After all, the greatness of the culture of ancient Egypt can only be felt on site: in the hot, dusty, stony Valley of the Kings.

Arrival: There are direct flights to Cairo, for example, with Egyptair from Berlin or with Lufthansa from Frankfurt. Eight-day round trip with flight (two days in Cairo, four days on the Nile) from 2259 euros (studiosus.com). On the occasion of the founding anniversary, FTI is offering the trip "100 years of Tutankhamun" with a flight, a visit to the old museum and the Howard Carter house, and a Nile cruise: eight days with flights from 1490 euros (fti.de). Near Tahrir Square are the hotel "Ramses Hilton", double rooms from 207 euros (hilton.com), and the "1920s", double rooms from 105 euros (1920sboutiquehotel.com).

Participation in the trip was supported by FTI Touristik. You can find our standards of transparency and journalistic independence at axelspringer.com/de/Werte/downloads.