Violence against women: details of the "new start pack" tested in January

Start a new life far from his executioner and without administrative hassle. 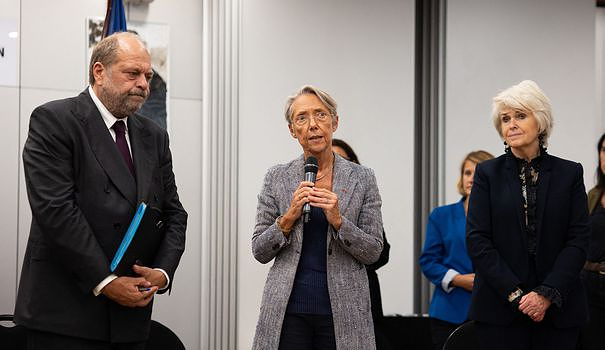 Start a new life far from his executioner and without administrative hassle. This is the whole idea of ​​the “new start pack” detailed by Isabelle Rome, Minister responsible for Gender Equality, on Saturday November 26. The measure had been announced the day before by Emmanuel Macron, during a trip to Dijon (Côte-d'Or) on the occasion of the international day against violence against women. The president said he wanted to implement "simplified and complete support to allow victims to rebuild" at the time of their "change of life".

The president presented this "new start pack" as "accompaniment [...] towards housing, towards employment", which could also be "financial for the care of children". In an interview on Franceinfo on Saturday, Minister Isabelle Rome detailed the measures of this new plan. They could, for example, give rise to "an allowance, a skip-the-line system for childcare, professional integration or training, emergency accommodation, psychological support", she specified. "The victim of violence must not" go knock on several doors, but have a single interlocutor who will trigger all the measures, "she said. And to add: "I presided over assize courts, judged many feminicides. I noticed that it was very difficult for the victims to leave, to extract themselves from the claws of their executioner, often they had to do several back and forth. This pack wants to avoid these false starts, "assured the former magistrate.

The objective is to simplify the "administrative maquis", in the words of Emmanuel Macron, which currently requires victims to multiply the steps for their care. In the police station or in the gendarmerie, the victims can now be directed to "referents", explained the president. The device will be tested from January on different territories", in particular rural, urban and overseas areas. The city of Dijon will be the first to implement it.

Also on Franceinfo, the Minister for Gender Equality announced that the first results of the parliamentary mission on the subject of specialized justice for violence against women should emerge in March. “It is necessary that all the actors be very well trained and that a dedicated system be put in place to best deal with this violence” intra-family, she explained. "If we do not understand what the influence is" or "the devastating impact of violence within the couple on children", we "leave women, we leave children in danger".

This parliamentary mission was launched by Prime Minister Elisabeth Borne last September. Parliamentarians will have to think about a justice that "reconciles the specialization of investigators and magistrates with the necessary proximity for the victims", she declared.

As of 2019, there are already 123 emergency processing channels for these cases among the 164 courts in the country. To this end, special chambers have been created in these courts in order to speed up the processing times for these files, which are often too long. It is these 123 emergency services that should soon make recommendations to deputies for specialized justice in matters of domestic violence.