During a ceremony attended by Colombian President Gustavo Petro and representatives of his Venezuelan counterpart Nicolas Maduro, a first truck passed from Venezuela to Colombia at 12:35 p. 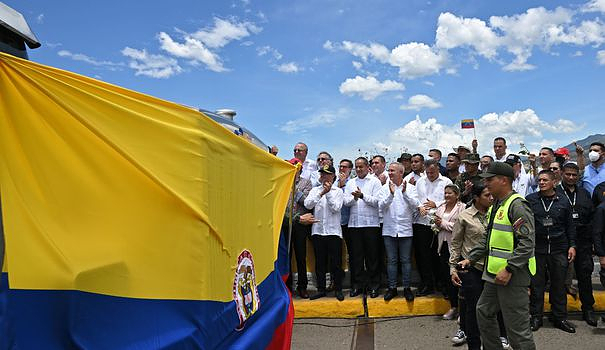 During a ceremony attended by Colombian President Gustavo Petro and representatives of his Venezuelan counterpart Nicolas Maduro, a first truck passed from Venezuela to Colombia at 12:35 p.m. (4:35 p.m. GMT) via the Simon Bolivar international bridge, located between the city Venezuelan town of San Antonio del Tachira and the Colombian town of Cucuta.

"We are resuming relations and taking firm action to advance the full and absolute opening of the border between brotherly peoples," the Venezuelan president wrote on Twitter. "It's a historic and extraordinary day!"

"It is very, very important that we can make progress on the fundamental rights of the population. Families have been separated. There has been a breakdown in our relationships of respect and trust," Colombian MP Jairo Cristo said during the ceremony.

The reopening of the border to goods transport vehicles is a first step towards the full restoration of trade between the two countries, which in 2008 weighed nearly 7.2 billion dollars.

Venezuela and Colombia share 2,200 km of an often insecure border, with the presence of irregular groups and guerrillas as well as mafias engaged in smuggling and other crimes.

The two countries were also to resume their direct flights on Monday, between the two capitals in particular.

Caracas and Bogota formally resumed their bilateral relations on Monday August 29 with the installation of respective ambassadors in the two capitals.

The election of Gustavo Petro, Colombia's first left-wing president, changed the situation with a strong desire to normalize relations.

Border crossings for cargo trucks had been restricted since 2015 and blocked since 2019, when amid violent riots Juan Guaido led a failed attempt to smuggle shipments of food and medicine sent from the United States.