Velasco, a councilor, stated that he sees the future of Carboneras as optimistic during his visit to the village.

"I see the future for Carboneras with optimism" because there isn't going to be any net loss in employment and activity. 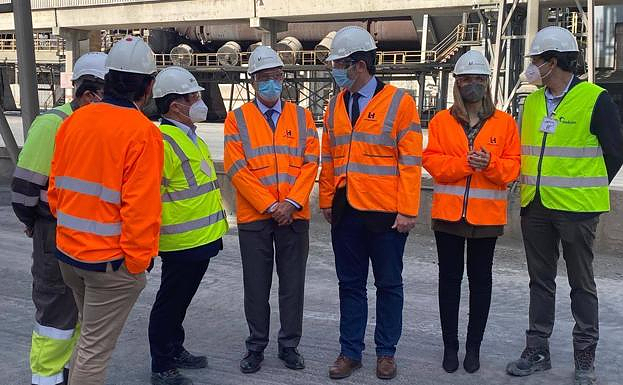 "I see the future for Carboneras with optimism" because there isn't going to be any net loss in employment and activity. This was the statement made by Rogelio Velasco, Minister for Economic Transformation, Industry and Knowledge and Universities. He met with Jose Luis Amerigo, the mayor of Levante Almeria, to discuss aspects of its industrial activity and to capture new business opportunities after the closures of Endesa and Holcim power plants.

It is true, it is. As the first coal mayor stated, following the 2019 communication of the cessation in activity of the coal-fired plant, "a more then desired situation for obtaining electricity in the cleanest manner", the challenge was to ensure that the municipality and its residents are not adversely affected by the loss in activity and employment.

According to the Andalusian Head of Economic Transformation, there was "a short-term employment problem" after the closing of the plants. It has abounded through the European Just Transition Funds until 2027. This is meant to "avoid any serious economic or social problems."

Today, the Minister of Economic Transformation visited the Holcim facilities, where a carbon-dioxide capture plant will be constructed. It is one of two industrial initiatives that are related to the circular economy, whose processing the Andalusian government has promised to accelerate in the province. Both companies will be located in Carboneras. They will receive a private investment totaling 67.9 millions euros and 1,828 induced jobs.

Velasco, not in vain, has stated before the media that both large tractor companies that have settled in the municipality as well as small and medium ones that work there, will be in a position to reverse the situation.

The funds from Europe will be crucial to this end. According to the Andalusian minister, it is anticipated that for every euro raised by the public sector, three euros will be contributed by the private sector. This will create "an effect of leverage".

According to the Junta de Andalucia the European Commission has identified Almeria as a preferred action area for which an allocation of EUR51.8million is available. It provides for the creation of and maintenance of 6,200 job opportunities, which directly affect 300 companies. The province will also be developed with five driving projects.

CO2 Circular Economy presented a proposal for a CO2 Capture Plant that would be situated in the LafargeHolcim cement plant in Carboneras. This new activity will be a focus on industrial innovation in order to reduce the environmental impact of the production of cement.

The investment plan is more than 25 million euros. It would also include the creation of 50 direct and induced jobs related to the development and expansion of new activities.

The project will capture and then use 50,000 tons of CO2 annually in its first phase. This would allow for a potential 600,000 tonnes of agri-food quality per year to be used in carbon fertilization in greenhouses.

It adds value by highlighting that Almeria's local CO2 source can allow for increased fruit and vegetable production and better crop efficiency.

A Joint Venture was formed by three companies: LafargeHolcim Spain with cement manufacturing operations in Carboneras; Carbon Clean with a technology that reduces environmental impact and costs with an APBS Patent and Heat Systems with local experience in the industrial and agricultural sectors.

Caldererias Indalicas is also promoting the other project. It involves the installation of a plant that will produce, store, distribute, and transform green H2. It is expected that 42.9 million euros will be spent on its execution. This represents an estimated creation of 87 direct and indirect jobs and 181 induced jobs.

The electrolysis process is used to produce green hydrogen. This process requires an energy source that includes a photovoltaic, hybrid and wind energy park. A green energy supply contract is also required to ensure electricity consumption is free from CO2 emissions.

After the hydrogen is produced, the hydrogen will be used in the first phase for transportation of urban vehicles (buses and delivery vans) as well as material handling (forklifts and pallet jacks) and industrial uses like the production of cement, vegetable and logistics. This project will create a market for clean energy-based vectors that will lower CO2 emissions in different productive sectors.

‹ ›
Keywords:
FuturoCarbonerasOptimismoAfirmaConsejeroVelascoTrasCierreTermica
Your comment has been forwarded to the administrator for approval.×
Warning! Will constitute a criminal offense, illegal, threatening, offensive, insulting and swearing, derogatory, defamatory, vulgar, pornographic, indecent, personality rights, damaging or similar nature in the nature of all kinds of financial content, legal, criminal and administrative responsibility for the content of the sender member / members are belong.
Related News