The Santiago Hospital auditorium hosted one of two concerts as part of the 34th Ciudad de Ubeda’ International Music and Dance Festival. 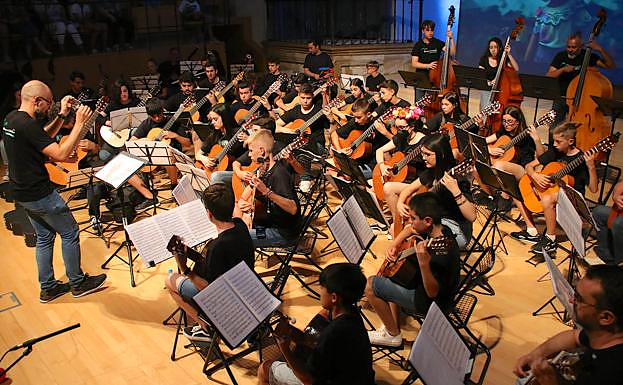 The Santiago Hospital auditorium hosted one of two concerts as part of the 34th Ciudad de Ubeda’ International Music and Dance Festival. It was performed with the Maria de Molina Professional Conservatory of Music. The other concert will take place next Tuesday, June 28. Arturo Fernandez Bayona directed his Guitar and Double Bass Orchestra. They performed with students from the musical language class and the collaboration of the flute, bassoon and percussion classes.

All the participants presented a diverse program, which included works from different periods to a packed audience. The program included a variety of rhythm and blues, as well as a mix of Disney songs. Students cheered the crowd up. The conductor of the orchestra thanked everyone for their contributions to this unique and exciting project he started a few years back.

This recital was part the 'Stage Pro" cycle, which is dedicated to emerging artists. It was based on collaboration agreements that the Festival 'Ciudad de Ubeda 'Festival' has with various entities and institutions. In this case, the local conservatory.

Tomorrow Saturday, Calio Alonto on piano and Alexis Morales, on trumpet, will present a diverse program as part of the "Music and Heritage" cycle. This will include Calio Alonso's work "Seven Costa Rican Songs of Popular Inspiration", which is a mirror of Manuel de Falla's "Seven Popular Spanish Songs" concert. The composer Marvin Camacho will also be there and will introduce the concert. It will begin at nine o'clock in the evening at Palacio Anguis Medinilla.

On Sunday, June 26, Alexis Morales (also Costa Rican) will once again offer master classes to students who are interested in learning how to play the trumpet at different Andalusia higher conservatories. A festival activity.

‹ ›
Keywords:
VariadoConciertoOrquestaGuitarrasContrabajosConservatorioUbeda
Your comment has been forwarded to the administrator for approval.×
Warning! Will constitute a criminal offense, illegal, threatening, offensive, insulting and swearing, derogatory, defamatory, vulgar, pornographic, indecent, personality rights, damaging or similar nature in the nature of all kinds of financial content, legal, criminal and administrative responsibility for the content of the sender member / members are belong.
Related News