Valencia is the design capital and lives its tradition

David prefers to be out and about at dawn, after the last night owls have left the pubs and bars in the old town. 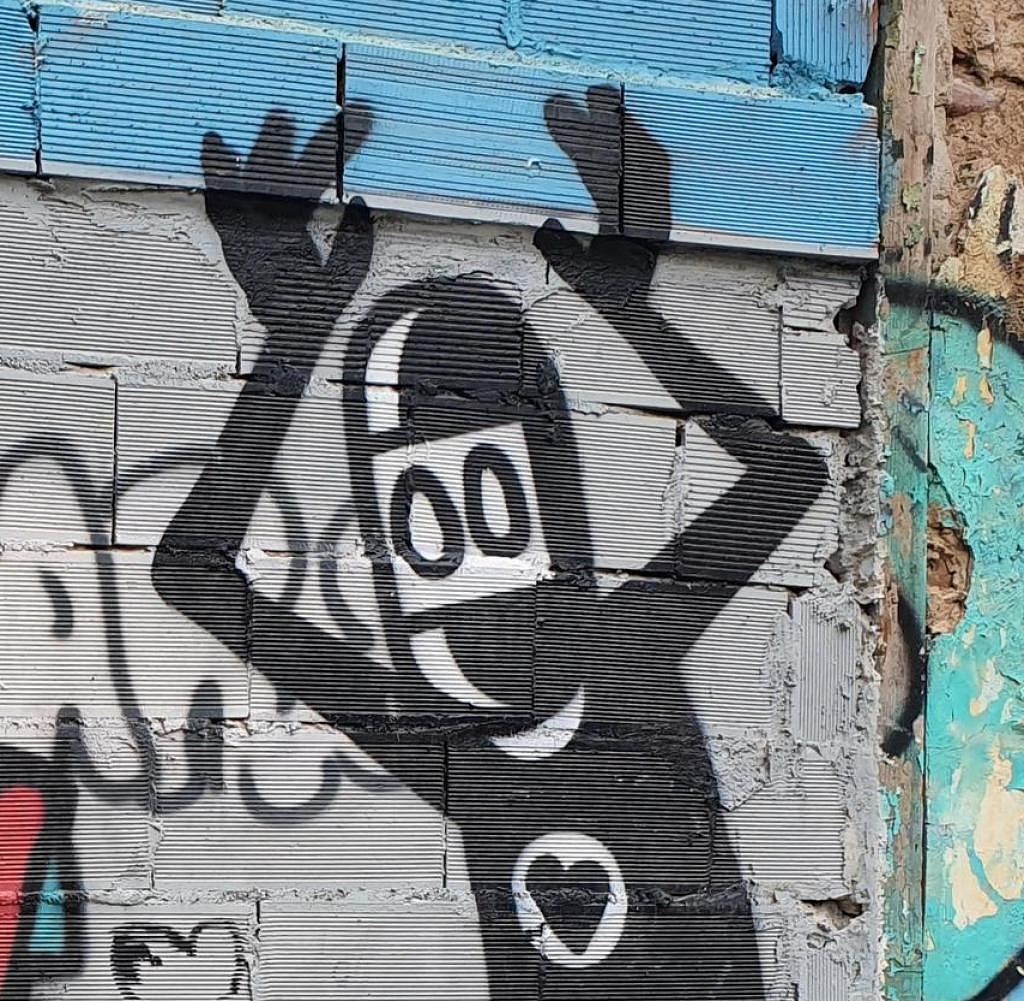 David prefers to be out and about at dawn, after the last night owls have left the pubs and bars in the old town. When the coaches have not yet spat out holidaymakers in front of the mighty, medieval city gate Torres de Serranos and before the café owners open their parasols on the Plaza de la Virgen. The square where the Romans founded Valencia around 2000 years ago and where a fountain decorated with figures bubbles up today.

At dawn, David de Limón has the Barrio del Carmen, the oldest quarter of the Mediterranean metropolis, to himself. But David is not drawn to the stately buildings, not to the cathedral, in which great architectural history - Romanesque, Gothic and Baroque - is shown in a small space. Not to the museums full of Roman ruins or modern art.

David is drawn into the network of countless alleys and winding streets that characterize the district. The labyrinth of streets in the old town is the neighborhood of the 40-year-old, who has made a name for himself as a street artist. His works adorn walls and projections, old facades and sometimes the fronts of cafés or shops - if he has been commissioned to do so.

Most of his motifs show a masked person dressed in black, often adorned with a red heart, occasionally holding a spray can: a street artist who, like David, can be seen here and there in the old town.

Barrio del Carmen has changed a lot since David was a child. "Our parents used to forbid us to walk on certain streets," he says. Many houses, you can still feel that today, were left to decay and were considered dangerous drug trading centers. But a lot has happened.

City dwellers and newcomers have rediscovered the maze of streets for themselves, whose alleys and squares have been largely closed to cars and invite you to stroll and explore. And street art, which has always been a part of the neighborhood, has been increasingly appreciated and tolerated in recent years. It now belongs to the Barrio del Carmen just like the countless small tapas bars, shops and galleries.

"Valencia has always had its ups and downs," explains architect Boris Strzelczyk. Like David de Limón, he lives in the Barrio del Carmen. There were phases in which the city grew rapidly. Just like in the 15th century, when production and trade in silk and other goods brought money into the city coffers and buildings like the Gothic Silk Exchange were built. Today it is a UNESCO World Heritage Site.

Or at the beginning of the 20th century, when the cultivation of oranges brought wealth to Valencia again and magnificent buildings in Modernisme, a form of Art Nouveau, were built in and around the old town. Among them, for example, the north station decorated with mosaics.

Today, according to the architect Strzelczyk, it is above all many projects that seem inconspicuous at first glance that make Spain's third-largest city, with almost 800,000 inhabitants, more attractive: countless cycle paths that have been created or expanded in recent years, revitalized markets and repaired parks.

The administration is also focusing on digital services, accessibility and reducing car traffic. The goal: The city is to become completely CO₂-neutral in tourism by 2025 and by 2030.

Initiatives that have contributed to the fact that Valencia has just been named the capital of intelligent tourism by a jury of the EU Commission. And because craftsmanship and Mediterranean design are very important in the city, it can proudly boast another award: it is the World Design Capital 2022 (WDC). "Most people think of concrete objects when they think of design," says WDC program director Corinna Heilmann. "You can also design a lifestyle."

In fact, just looking out of the plane window as you approach the city is enough to see what Valencia has to offer besides alleyways full of street art and ancient history. There is the deep blue of the Mediterranean Sea and the beaches that stretch along it like golden stripes. Or the Jardín del Turia, the longest park in Spain, which meanders nine kilometers through the city like a green belt.

And the "City of Arts and Sciences", an ensemble of seemingly organic buildings by star architect and son of the city Santiago Calatrava, which rise like huge sculptures in the south-east of the park. Of course, the sun is also decisive for the Mediterranean feeling in the city. It shines here around 300 days a year.

"The overall package is right in Valencia," says Corinna Heilmann. The flair, the culture of enjoyment, the long tradition of craftsmanship and design. Raquel Vidal and Pedro Paz from Canoa Lab agree. The two ceramic artists have housed their studio in a former car wash in the lively Barrio Ruzafa. Once the summer residence of the Moors, it is now a popular nightlife and shopping district.

“Ceramic design has a long history in Valencia,” says Raquel as her fingers deftly shape the wet clay. "Ceramics have been fired in this region since the Neolithic Age, and later tiles and floor tiles were shipped from here all over the world."

Their works are reminiscent of vessels from the Romans and Arabs. With this, Raquel and Pedro want to build a bridge between the past and the present, putting old forms in a new, contemporary context. The ceramic designers find inspiration in the city: in the historical museums, in buildings decorated with tiles and ceramic jewellery, in the colors and shapes that Valencia supplies them with.

A thought shared by fashion designer Alba García. With her label Cache Croche, she continues the city's silk tradition. She creates new clothes from old fabrics in a patchwork-like manner. García takes up traditional patterns and motifs in her collection and recycles waste products: she cleans plastic waste washed up from the Mediterranean Sea, melts it down and uses it to make jewelry.

"Slow fashion is important to me," says García. “And circular economy. I want to bring back to life what others throw away, while at the same time connecting to Valencian traditions and history.”

The works of Ana Milena Hernández and Christophe Penasse's award-winning interior design and product studio Masquespacio, which has long been known far beyond Spain's borders, also show how design and history can go hand in hand in a city.

For example in the design of "La Sastrería", a restaurant in the maritime Barrio Cabanyal. "We strolled through the district for days, looked at what we found here, what makes this place special," says Hernández. "And we implemented that."

The result: Wooden chairs with vertical struts, which are intended to be reminiscent of the fishermen's boats. White-bluish colors that evoke the encounter between the beach and the ocean, and glossy glazed tiles that adorn the walls and counter.

Like the old town, the district of Cabanyal, which borders the wide beach of Malvarrosa near the seaport, has been developing for a few years. "For 17 years, the residents have protested against the radical replanning of their district," says architect Boris Strzelczyk.

The former city government had planned to cut a monumental avenue across the district, which would have led to the demolition of hundreds of buildings, some of which are listed. Houses that the residents of the former fishing village decorated with tiles and other decorative elements at the beginning of the 20th century, based on the noble Modernisme buildings in the city center. A colorful potpourri of shapes and colors in which no two houses are alike.

Since this plan was scrapped after a change of government, the district has flourished. Here, too, it is design, craftsmanship and architecture that bring hidden gems back to life.

An example of this is the district's new city archive and cultural institute, which will deliberately not be given a modern location, but will move into a former slaughterhouse that was renovated and carefully expanded under Strzelczyk's leadership.

"During the renovation we discovered graffiti, murals, hand-painted wall tiles and the cement tiles typical of Valencia, which we integrated," explains the architect. They were either left in place and highlighted, or used elsewhere in the building.

A concept of sustainability shared by many architects, craftsmen and designers. And who makes the Mediterranean metropolis what it is. A city that builds on its traditions and at the same time looks ahead with a good sense of modern ideas.

Arrival: There are direct flights to Valencia from several cities in Germany, Austria and Switzerland. An alternative are long-distance buses from the Eurolines and Alsa lines, which head for Valencia from various German cities.

World Design Capital: The central meeting point is the “Ágora” pavilion on the town hall square. In addition to congresses, exhibitions and lectures, from 19. to 25.09. a big “World Design Street Festival” was held. More info at: wdcvalencia2022.com

Tours: Tours with trained architects are offered by the German-speaking Guiding Architects (ga-valencia.es); German-language walk and bike tours as well as excursions in the area via Valencia Inside (valenciainside.com); Street Art Tours in English/Spanish via Turiart (turiart.com/en)

After the ground staff strike, Lufthansa is back to normal operations. But the next strike is already looming, this time by the pilots' union. What to do if the flight is cancelled? "If no replacement flight is provided, you can remedy the situation yourself," says Kay Rodegra, a lawyer specializing in travel law.

‹ ›
Keywords:
SpanienLänderporträtsValenciaStädteporträtsStädtereisenStrandurlaubJardín Del TuriaDesignGeschichtePlaza De La VirgenRathausplatzBarrio RuzafaMittelmeerMittelmeermetropoleTorres De SerranoBarrio Cabanyal
Your comment has been forwarded to the administrator for approval.×
Warning! Will constitute a criminal offense, illegal, threatening, offensive, insulting and swearing, derogatory, defamatory, vulgar, pornographic, indecent, personality rights, damaging or similar nature in the nature of all kinds of financial content, legal, criminal and administrative responsibility for the content of the sender member / members are belong.
Related News