Hadi Matar, 24, is accused of stabbing Salman Rushdie, the author of "Satanic Verses", during a Friday conference in the nearby town of Chautauqua. 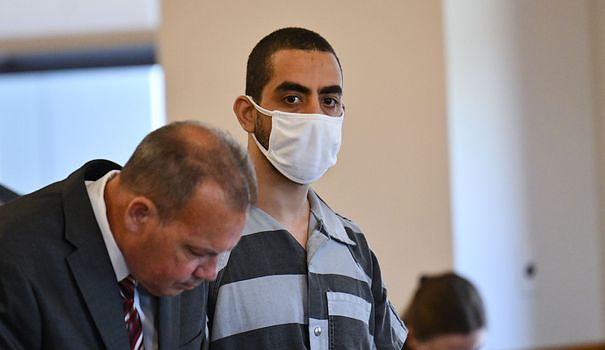 Hadi Matar, 24, is accused of stabbing Salman Rushdie, the author of "Satanic Verses", during a Friday conference in the nearby town of Chautauqua.

Arrested immediately after the fact, the suspect had already pleaded not guilty during a procedural hearing on Saturday.

Head lowered, masked, handcuffed and dressed in a prisoner's outfit with black and white stripes, Mr. Matar spoke Thursday through the voice of his lawyer.

He faces up to 25 years in prison for attempted murder and up to 7 years for assault. The judge chose to keep him in detention, without the possibility of bail.

At the previous hearing, prosecutors called the attack premeditated.

His lawyer Nathaniel Barone stressed Thursday that his client was entitled to a "fair trial" and respect for the "presumption of innocence".

Asked Wednesday by the New York Post, which claims to have contacted him in prison, Hadi Matar said he was "surprised" that Salman Rushdie survived the attack.

The 75-year-old British author, stabbed a dozen times in the neck and abdomen and evacuated by helicopter to a hospital, had to briefly be placed on a ventilator before his condition improved.

Mr Matar, 24, did not say whether he was inspired by the fatwa issued by Ayatollah Khomeini in 1989 from Iran calling for the death of the writer, his book 'The Satanic Verses' having been deemed blasphemous by the Iranian Supreme Leader.

He just explained to the New York Post to have "esteem for the ayatollah", someone "remarkable".

As for Salman Rushdie, Mr Matar said he was not "a good man". "I don't like this person," he said.

"He is someone who attacked Islam," he added. Watching videos of the author on YouTube, he found him "hypocritical".

Hadi Matar had returned "changed" and more religious from a 2018 trip to Lebanon, his family's country of origin, his mother told the Daily Mail website on Monday.

Salman Rushdie, born in 1947 in India into a family of non-practicing Muslim intellectuals, provoked the anger of part of the Muslim world with the publication in 1988 of "Satanic Verses", a novel judged by the most rigorous as blasphemous to the regard to the Koran and the Prophet Muhammad.

Ayatollah Khomeini, founder of the Islamic Republic of Iran, issued a fatwa in 1989 calling for the murder of Salman Rushdie, who had lived for years under police protection.

Ayatollah Khomeini's fatwa against the writer was never lifted and many of his translators came under attack.

After three days of silence, Iran on Monday denied any involvement in the attack, blaming Salman Rushdie himself.

"In this attack, only Salman Rushdie and his supporters deserve to be blamed and even condemned," said Nasser Kanani, spokesman for the Iranian Ministry of Foreign Affairs.

Salman Rushdie, who had lived in New York for twenty years, became an American citizen in 2016.

Despite the threat, he had appeared more and more frequently in public, often without a visible escort, while continuing to champion satire and irreverence in his books.

In an interview given to the German magazine Stern a few days before the attack on Friday, he said he was "optimistic" and confided: "Since I live in the United States, I have no more problems (. ..) My life is back to normal."

Hadi Matar is due to appear in court again on September 7.