US Open: the advent of the new king Carlos Alcaraz

"It's something I dreamed of since I was a kid, I worked very, very hard to get there, it's hard to find the words, I feel a lot of emotions," reacted the Spaniard before raising his chopped off. 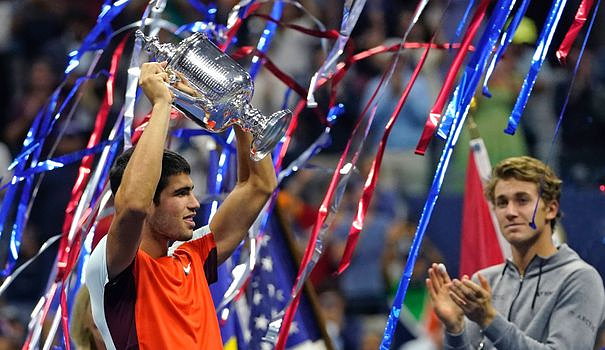 "It's something I dreamed of since I was a kid, I worked very, very hard to get there, it's hard to find the words, I feel a lot of emotions," reacted the Spaniard before raising his chopped off.

A few moments earlier, his sneakers had crunched on the cement of the Arthur-Ashe court, brutally braking his race, released by the ultimate unforced error from Casper Ruud. Winner 6-4, 2-6, 7-6 (7/1), 6-3, he then collapsed on the ground on his back, his arms crossed.

Very quickly, he put his hands on his face as a teenager, in the grip of the most beautiful emotion of his young career, his smile clouded with tears. "I thought of my mum and my grandfather. A lot of other members of my family who couldn't come," he said, after climbing into the stands for outpourings of tearful joys with his father, one of his three brothers and his coach Juan Carlos Ferrero.

Here is the kid from El Palmar, near Murcia, on the roof of the tennis world, at exactly 19 years, 4 months and 6 days - much faster than the Australian Lleyton Hewitt (20 years, 8 months and 26 days) at his rise to the top 21 years ago - succeeding Russian Daniil Medvedev, both on the US Open charts and on the coveted throne.

In recent months, the Spaniard repeated his childhood dream over and over again. That of settling first at the top of the world hierarchy, even before registering his name on the prize list of a Grand Slam.

It will ultimately be the opposite within a few hours. He was first titled at the expense of Ruud, who could like him do a double blow at Flushing Meadows and will be his runner-up on Monday when the ATP rankings are published.

It was after an often tight standoff, sometimes illuminated with sumptuous points, concluded in 3h20 that "Carlitos" came to the end of the "Ruuuuud" (as his fans encourage him) Norwegian, far from having undeserved for his second Grand Slam final of the season.

All this, under the eyes of comedian Jerry Seinfeld, rocker Jon Bon Jovi or even fashion pope Anna Wintour, who had come to attend the last dance of "Queen" Serena Williams in the first week and obviously could not miss the advent of a new "Rey" in vogue.

Powerless in early June at Roland-Garros against the ogre of ocher Rafael Nadal, Ruud stood up to Alcaraz for a long time, to the point of being able to harbor some regrets, after two set points missed at 6-5 in the third set.

Deferred, the Iberian-fast could have approached the tie-break with a trembling hand, he who had lost the four he had played during this tournament. On the contrary, it was the Norwegian who cracked by committing sudden unforced errors.

Whereupon, Alcaraz finished the job, tightening up his game, notably removing these too many unsuccessful drop shots, as if he were a prisoner of the game for a moment.

This final completes a hair-raising tournament for Alcaraz, who has become the finalist who has spent the most time on the court during a Grand Slam with a total of 23h40. The previous record was held by South African Kevin Anderson when he lost in the final at Wimbledon in 2018 (11:20 p.m.).

His trajectory is nonetheless meteoric and already places him in the stratosphere of tennis, at a time when Nadal (36), holder of the record for major titles (22), has to deal with recurring physical problems and the mind turned to imminent fatherhood, and where the retirement of Roger Federer, who has not played in a tournament since Wimbledon-2021, has never seemed so close.

Of the Big 3, only Novak Djokovic (35) has not said his last word and will undoubtedly still be a candidate for the main titles and the place of world No.1. And it will also be exciting to see how Alcaraz will assume his new status in front of him, the other representatives of the new wave (Ruud, Jannick Sinner, Frances Tiafoe, Nick Kyrgios...), without forgetting the Medvedevs, Zverevs and Tsitsipas who are unwilling to to be the sacrificed generation.