"Obviously I was tense! It's a Grand Slam semi-final", admitted, after her heavy defeat 6-1, 6-3 in 1:06, the 28-year-old Frenchwoman who had never yet exceeded the quarters finals of a major tournament. 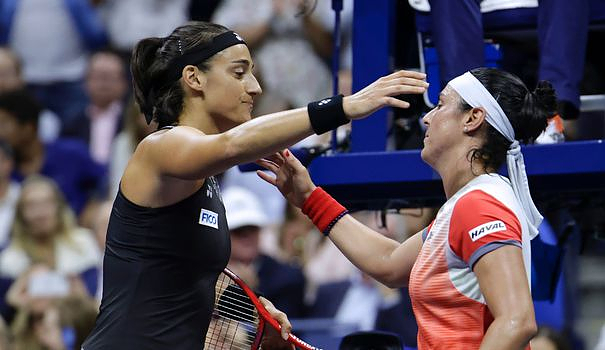 "Obviously I was tense! It's a Grand Slam semi-final", admitted, after her heavy defeat 6-1, 6-3 in 1:06, the 28-year-old Frenchwoman who had never yet exceeded the quarters finals of a major tournament.

"His game is a challenge for me, I knew I had to play my tennis aggressively, but that the quality of the ball I was going to have would be different (from previous rounds, editor's note). was going to be able to take up this challenge? Today, I didn't succeed. The arm went less well, the legs were less present and that makes a lot of difference on Ons, which is having a super solid year and which didn't bother me. given a lot", analyzed Garcia.

For the past few weeks, her slogan "fly with Caro" (flies with Caro) which she illustrates on the courts after victories by imitating the flight of an airplane by spreading her arms, has seemed more topical than ever.

After complicated months, with physical glitches that made him lose confidence, the ex-N.4 had fallen to 79th in the world last May. At the same time, she injured her foot in the first round in Miami.

"There were so many moments of doubt after Miami, I couldn't get out of my foot injury... After ten days on crutches you realize that you can't walk anymore, you doubt a lot But I was well surrounded to take things step by step,” she explained.

Garcia regained her confidence by winning in Bad Homburg, then Warsaw and above all at the WTA 1000 in Cincinnati, just before coming to New York where she literally swallowed her first five opponents, including Alison Riske and Coco Gauff. she had never been beaten before.

Eliminated and disappointed, she nevertheless draws a positive balance from her New York epic where she was able to convince herself, if she still needed it, that her aggressive game, if served by a flawless physique and a mind of steel, was the tennis she loves to practice: "that's how I get off on my passion", she insisted.

On Monday, she will return to 10th place in the WTA and can hope to qualify for the WTA Finals (ex-Masters) which will bring together from October 31 to November 7 in Fort Worth (Texas, United States), the eight best players of the season. .

"It's cool to be in the running for the WTA Finals. You have to recover well and get back to work to continue to advance this game", she underlined, specifying that she still has three tournaments on her program to win her prize. ticket for Texas: Tokyo, San Diego and Guadalajara.

For his part, Jabeur (5th) will play his second major final in a row after that of Wimbledon. It will be against world No.1 Iga Swiatek who twice reversed the course of a match that almost turned in favor of her Belarusian opponent Aryna Sabalenka (6th).

The 21-year-old Polish, victorious for the second time at Roland-Garros this year after 2020, won 3-6, 6-1, 6-4. After the loss of the first set, she pushed the match into a decisive set where the Belarusian broke away 4-2. But Swiatek then took matters into her own hands by attacking her rival on almost every ball.

She will find don on Saturday in the Jabeur final, which she had beaten on clay in Rome.

"She is always difficult to play. It will be very physical. She has a very good hand and she is very strong on her baseline," summarized Swiatek.

She will have to take into account another factor, the determination of the 28-year-old Tunisian, linked to her string of major finals: "I'm here to get the title", warned the first African player of the Open era (since 1968) to reach the final at Flushing Meadows.