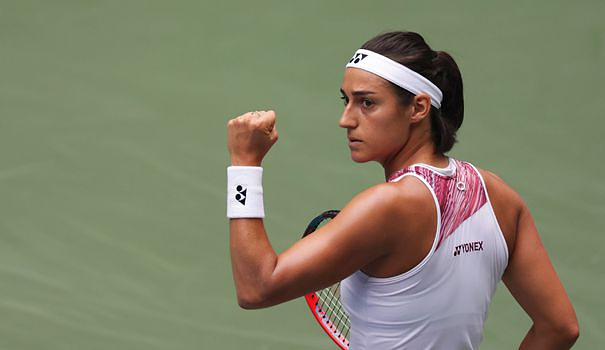 This seventh day was marked by the elimination in the men's table of defending champion Daniil Medvedev by a flamboyant Nick Kyrgios, winner 7-6 (13/11), 3-6, 6-3, 6-2. In addition to the match, the Russian also loses his place as world N.1: he will be replaced on September 12, the day after the final, by Rafael Nadal (currently 3rd), Carlos Alcaraz (4th) or Casper Ruud (5th), always competing in New York.

Garcia will be the only French representative in the quarter-finals, since shortly before his qualification, Corentin Moutet (112th and drafted from the qualifications) had fallen against the Norwegian Ruud 6-1, 6-2, 6-7 (4/7), 6 -2.

Garcia (17th) had never beaten Alison Riske (29th) in three confrontations. But for a few weeks, she has found tennis which allowed her to climb to 4th place in the world in 2018 and she made short work of the American, swallowed 6-4, 6-1 in 1h22 .

"Alison is a very tough player, a fighter, she moves a lot. I had to be very aggressive. The first set was tight, it wasn't great tennis, I had to deal with my emotions. The second set was very good", she analyzed after performing her usual victory celebration, arms outstretched like an airplane flying over the Louis-Armstrong court.

The Lyonnaise, who had never passed the third round of the New York Major, thus equals her best result in a Grand Slam tournament, having already played the quarter-finals at Roland-Garros in 2017.

She will try to do even better on Tuesday against the American Coco Gauff (12th), finalist of the last Roland-Garros.

"I'm so excited to be in the quarters, I've built up a lot of confidence since Cincinnati," said the Frenchwoman in reference to her WTA 1000 title just before the start of the US Open.

Against Riske, Garcia took a set to break free. But on a winning return, she completed the first set by achieving the only break of the set.

The lock had jumped and the Lyonnaise then clearly dominated the second set, even if it took her five match points to conclude, after also saving three break points for the American.

For Moutet, on the other hand, this round of 16 played in the huge arena of the Arthur-Ashe court marked the end of a great adventure: drafted after his defeat in the third qualifying round, he completely missed the first two sets, making a lot of mistakes.

"There were positive games, but there were also games that I won without playing very well, so there are plenty of things to work on, to improve. I can play better than that, I can be better and I have to be better if I want to win more games. So there is a lot of work ahead," said the 23-year-old Frenchman.

Against Ruud, frustration quickly won. It first manifested itself in a rather unusual way, when he did a series of push-ups, as if to punish himself after a point lost at the start of the second set.

Less funny, he angrily sent two balls in quick succession into the stands, just before the loss of the round, logically receiving a penalty point, after having received a warning a little earlier for the same infraction.

More aggressive, more creative, he was rewarded by winning the third set in the tie break by taking advantage of a double fault from his opponent.

But Ruud managed to regain control of the match by taking Moutet's serve to lead 3-1. An advantage that he knew how to keep solidly afterwards.

The 23-year-old Norwegian, who reached the quarters for the first time at Flushing Meadows, will face the Italian Matteo Berrettini (14th), semi-finalist in 2019 and beaten in the quarters last year.