US elections: Obama called for help by feverish Democrats

By November 8, the date of this election with substantial stakes, it is Barack Obama that we will see everywhere, on the ground and in campaign clips, rather than the current tenant of the White House. 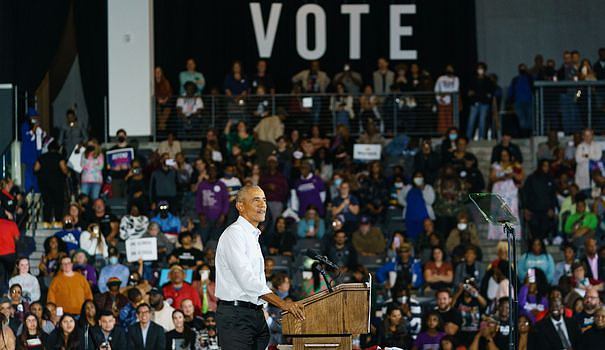 By November 8, the date of this election with substantial stakes, it is Barack Obama that we will see everywhere, on the ground and in campaign clips, rather than the current tenant of the White House.

On Friday, the two men however spoke at the same time, in two corners of the United States: Joe Biden in Pennsylvania (northeast), Barack Obama in Georgia (south), two decisive states for the Democratic Party campaign.

And both declined, basically, the same speech: it is a question of saving American democracy by blocking the Republicans, the party of Donald Trump.

But the former Democratic president, playing with his sense of repartee and his art of "punchlines", stole the show from the one who was his vice-president, and who never had his oratorical ease.

"If they win, it's impossible to say what might happen," Barack Obama said of the conservatives in verve and shirtsleeves, visibly savoring the enthusiasm of his audience in Atlanta.

“I want you to get off your couch and go vote! Put down your phone, leave TikTok alone, go vote!”.

Continuing on Saturday in Michigan (north), in Detroit, the former president was able to demonstrate this repartee.

"Sir, that's exactly what I'm trying to say. We have a framework here in our democracy. This is me speaking, you will have the opportunity to speak later. You wouldn't do that on your workplace", he said, challenged by a protester.

The former president - from 2009 to 2017 - had moved away from the political arena, devoting himself to other activities: production of documentaries, publications, philanthropy...

But he made a very noticeable return there, chaining the meetings: after Georgia, Michigan and Wisconsin on Saturday, he will be in Nevada on Tuesday, then in Pennsylvania.

The polls, to be taken with a grain of salt, predict for the moment that the Democratic Party will retain its precarious control of the Senate, but will lose that of the House of Representatives to the benefit of the Republican opposition.

The recent rise in the opinion polls of candidates from the conservative right, including the most virulent foals of former Republican President Donald Trump, however, has raised fears in the White House of more massive losses than expected in the House. Even a tilting of the Senate, which would put the two houses of Congress under the control of the Republicans.

Barack Obama is, in a way, well placed to sound the alarm: his party had suffered what he himself described as "unfrozen" during the 2010 legislative elections, marking half of his first term.

“There is an inherent danger in being in the White House and being in the bubble,” he remarked at the time about these elections which, for 160 years, have almost always sanctioned the party at the national level. power.

Joe Biden, who regularly prides himself on being a president close to the "middle class", far from the microcosm of Washington, has nevertheless given the impression since the start of the campaign of remaining sheltered in the "bubble" in question.

He travels regularly and raises funds for the Democratic Party, but the 79-year-old president, unpopular, has not ventured so far in some hotly contested states such as Arizona.

And he will hold his final campaign meeting the day before the election on known ground, in the very democratic Maryland (east).

Barack Obama was worried about the direction adopted by the Democrats, in an interview posted online in mid-October, fearing to see them embark on abstract controversies, around complex social subjects and questions of vocabulary, at the risk of appear disconnected from daily concerns.

And this, in the face of Republicans having adopted very simple electoral strategies, hammering in all tones the same messages, against crime and against the high cost of living.

Believing that politics should not be a matter of "killjoys", Barack Obama had said: "And sometimes the Democrats are, aren't they?".

"Being just a little more concrete and a little more prosaic, I think it would do a lot to counter the propaganda continuously broadcast by Fox News", the favorite channel of the radical right, had estimated Barack Obama.