US and allies won't be 'bullied' by Putin, says Biden

"America and its allies will not be intimidated" and Vladimir Putin "will not scare us," he said during a speech at the White House. 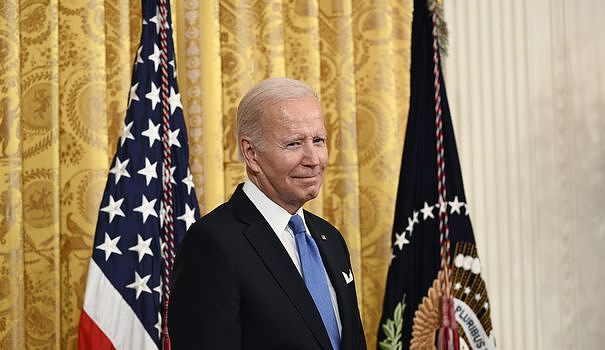 "America and its allies will not be intimidated" and Vladimir Putin "will not scare us," he said during a speech at the White House.

Joe Biden then addressed the Russian president directly, pointing his finger at the camera warning him against any attack from NATO territory.

"America and its allies are fully prepared to defend every inch of NATO territory," he said.

The American president was speaking shortly after the formalization of the annexation of four Ukrainian territories by Mr. Putin, who promised victory to his country during a festive concert in Red Square, Moscow.

The Russian President and other country officials have repeatedly threatened to use nuclear weapons to defend newly incorporated Ukrainian territories.

Joe Biden called it "reckless words and threats", calling Friday's ceremony a "phony number" meant to show his strength but which he said instead illustrates "that he is in trouble".

Shortly after the president's speech, his national security adviser Jake Sullivan said that the risk of nuclear weapons by Russia existed but did not seem "imminent".

"We currently see no indications of imminent use of nuclear weapons," he said.

Jake Sullivan also assured that the American army in Europe was ready to face “any eventuality”.

The United States will announce the "immediate" shipment of new weapons to Ukraine next week, he also said.

Referring to new aid of 12 billion dollars to Ukraine voted in the American Congress, the president promised to "continue to provide military equipment" to the country "so that it can defend itself".

Joe Biden also promised to send underwater assets to the site of the Nord Stream 1 and 2 gas pipeline explosions, "to determine what exactly happened", after what he called an "act of deliberate sabotage".

“We will work with our allies to shed light on this,” assured Mr. Biden. “I have already started to help our allies strengthen the protection of this crucial infrastructure,” he added.