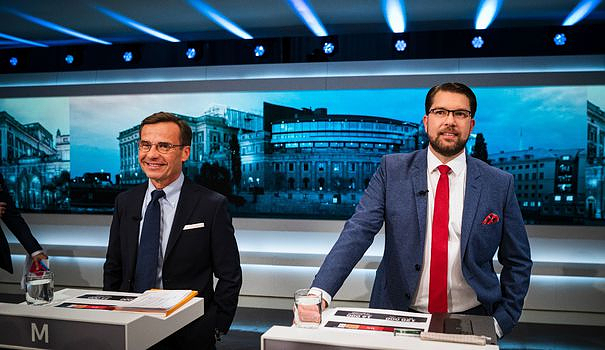 "Now we are going to restore order in Sweden!" Immediately reacted on Facebook to his successor, the leader of the conservative Moderates party, Ulf Kristersson. "I now begin the work to form an effective new government," the right-wing leader added in a video message.

With 176 seats, including 73 for the far-right Sweden Democrats (SD), the four-party bloc is just ahead of the left-wing bloc (173 seats), according to a near-final tally by the electoral authority of 99.9% of polling stations.

Sunday's elections were so close that it took until the tens of thousands of votes missing on Wednesday to be added.

The shift is historic: never before has a Swedish government relied in parliament on the Democrats of Sweden, the big winners of the elections with 20.5% of the vote and a new rank of second party in the country.

"Now the work begins to make Sweden good again," reacted its leader Jimmie Åkesson on Facebook, promising to be a "constructive force and initiative".

Heir to a neo-Nazi group when it was created in 1988, the far-right party has gradually become commonplace in the Swedish political landscape, entering parliament in 2010 with 5.7%, then climbing with each election, against a background high immigration and criminal gang problems in Sweden.

Although the SD is the first party of the majority of the rights, its leader is not in a position to have the support of the three other parties to become Prime Minister, a post promised to Ulf Kristersson.

One of the most complicated points concerns the ambition displayed by the far-right party to be part of the government. The three traditional right-wing parties (Moderates, Christian Democrats and Liberals) are against it.

The most likely scenario according to analysts is that the SD, although the biggest party of the four, only supports the government in parliament, without being directly part of it.

"The process will take as long as it takes," Jimmie Åkesson said on Wednesday.

- Salvini to the angels -

But this narrow majority, ranging from the centre-right to the extreme right, looks very fragile, the Liberals in particular and the SD having very divergent political lines on a number of issues.

"We are only going to be one or two seats away from a government crisis," warned Magdalena Andersson.

Former gymnast, Ulf Kristersson will now have to succeed in the acrobatics of finalizing and maintaining the union of the three liberal, conservative and nationalist rights.

It was he who at the end of 2019 had for the first time envisaged a scenario of collaboration between the right and the SD.

The campaign was dominated by themes favorable to the right-wing opposition: criminality and deadly settling of scores between gangs of immigrant origin, integration and soaring energy bills.

"It's a sad sign of our time, that they can take advantage of scaring people, about what they say about all these criminals, etc," sighs Larry Nilsson, a pensioner from Malmö (south). "There's only 1 or 2% of the population that goes through this, most live a very safe life, how can you win an election on this?"

The victory of a right/extreme right alliance in Sweden comes less than two weeks before elections in Italy, where a coalition bringing together Fratelli d'Italia of Giorgia Meloni (post-fascist) and Forza Italia of Silvio Berlusconi (liberal right) is given favorite.

"Even in beautiful and democratic Sweden, the leftists are defeated and sent home! On Sunday 25 (September) it's our turn, we're going to win!" said Matteo Salvini, the leader of the Italian League (anti -immigration).