Unforgettable flamenco night with Estrella and Tomatito in Ubeda

The 'Ciudad de Ubeda International Music and Dance Festival' reserved a place for flamenco as usual. 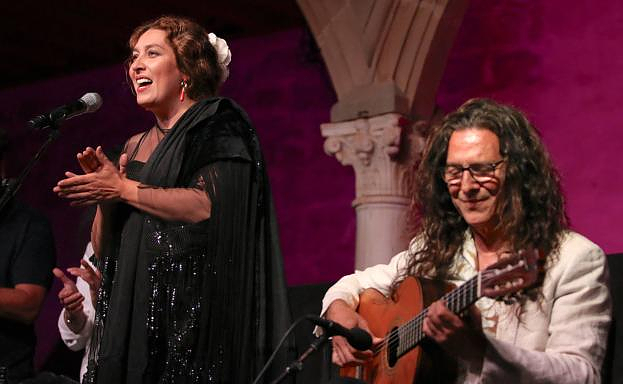 The 'Ciudad de Ubeda International Music and Dance Festival' reserved a place for flamenco as usual. This demonstrates its ongoing interest in allowing other genres to be represented, in order to appeal to a wider audience and satisfy diverse tastes while still programming with excellence. This was the basis of last night's ubetense cycle, which brought together two outstanding artists, Estrella Morente and Tomatito, to delight the thousands of fans who filled the Renaissance courtyard at the Hospital de Santiago cultural centre.

All tickets sold out for this memorable evening. Although it wasn't a show that featured the Almeria guitarist and the Granada singer, both were on stage together to give the festival's attendees a memorable moment. A day filled with emotions ended with the famous tango. It was performed on flamenco's field.

The two artists had presented their proposals previously accompanied by the corresponding groups. After at least three successful previous visits to the Ubeda Festival, Tomatito returned with his solo performance (in 2004) or with Jose Merce (in 2019). Tomatito arrived with his new tour titled 'Vivire' in honor of the great masters who were his sources and taught him. Logically, there were plenty of nods at Paco de Lucia and Camaron. There was even an allusion to Piazzolla. Jose del Tomate, his son and Latin Grammy holder, accompanied his father as second guitarist. Kiki Cortinas and Morenito De Illora were there with cante, clapping, and Israel Suarez "Pirana" on percussion.

Estrella Morente was also a repeat in the Ciudad de Ubeda, where she could be heard singing 'El amor brujo" with the City of Cordoba Orchestra (in2012) or as a soloist for the first time (in2000). She walked these hills carrying a new album, 'Leo'. It was one of her most intimate and visceral projects. Her legacy is merged with her most personal aspect. She sang to Granada, to love, and there was plenty of room for improvisation from the heart. She was supported on stage by Jose Carbonell (Montoyita) and Jose Carbonell (Monty), the clapping and choruses of Angel Gabarre, Antonio Carbonell, and the percussions and percussions Curro Conde Mortente.

The International Festival of Music and Dance had a wink at the piano the day before. This instrument plays a unique role in this edition. Particularly, Juan Jose Munoz Canivano was a good friend of the Ubetense event and performed in the Renaissance courtyard at the Parador Nacional de Turismo on Friday afternoon. His program, "Sound Universes", featured works by Debussy and Khachaturian. His versatility and ability to communicate and interpret with the public was appreciated by the audience. This concert was part the "Music and Heritage" series that covers important and historic places within the World Heritage Site.

Munoz Canivano at the patio of Parador ROMAN

‹ ›
Keywords:
VeladaFlamencaInolvidableManoTomatitoEstrellaMorente
Your comment has been forwarded to the administrator for approval.×
Warning! Will constitute a criminal offense, illegal, threatening, offensive, insulting and swearing, derogatory, defamatory, vulgar, pornographic, indecent, personality rights, damaging or similar nature in the nature of all kinds of financial content, legal, criminal and administrative responsibility for the content of the sender member / members are belong.
Related News