Widely stretched during the pandemic, public finances are under pressure all over the world, under the combined effect of rising prices, central bank rates and a high debt ratio. 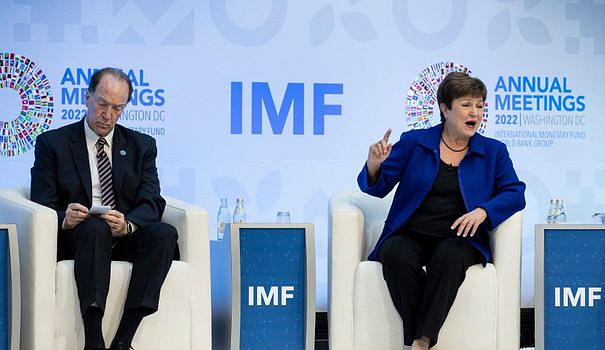 Widely stretched during the pandemic, public finances are under pressure all over the world, under the combined effect of rising prices, central bank rates and a high debt ratio. On October 7, the President of the World Bank (WB), David Malpass, explained that he now feared a "fifth wave of debt crisis" (period when a State no longer has the means to repay its public debt or, more broadly, where creditors refuse to grant new loans to the government). Same observation on the side of the International Monetary Fund (IMF) which underlines in its annual report, published Tuesday, October 11, that poor countries are particularly affected.

25% of emerging countries and more than 60% of low-income countries are in debt distress; some have even already defaulted. This is the observation made by the Managing Director of the IMF, Kristalina Georgieva, when the international body published its report on global financial stability. “Extraordinary government support during the pandemic helped stabilize financial markets and gradually ease liquidity and credit conditions around the world, which helped the recovery. However, deficits increased and debt has accumulated much faster than in previous recessions, including the global financial crisis,” it read.

The economic prospects put forward are not rosy. The IMF has in fact revised downwards the growth forecast for the planet next year and even predicts a recession in Germany and Italy. Governments now have to deal with rising import prices and debt service in an environment of high inflation and slowing growth. The high debt ratio as well as the rise in central bank rates in order to fight against inflation contribute to widening the public debt. The latter now accounts for nearly 40% of the global total, the highest percentage in nearly six decades.

"We see private investors increasingly differentiating between emerging countries with regard to their economic situation. This is however an evolution compared to previous crises", where the crisis in an emerging country often extended to others, underlines Atsi Sheth, managing director of the credit strategy department at Moody's, in an interview with AFP. "We are facing an unprecedented situation. States which have a high level of indebtedness and are at the same time importers of energy and foodstuffs will have difficulties, even more so if they borrow in dollars", adds- she.

To support these countries in difficulty, the IMF has an obvious financial strike force: a lending capacity of 1,000 billion dollars. "And he could even use his gold reserves as collateral if he had to raise more," Masood Ahmed, president of the Center for Global Development (CGD), told AFP. The Fund has also tried to adapt to urgent needs, with a mechanism to help States in the fight against the pandemic, now adapted to meet the cost of rising prices.

But both the IMF and the World Bank are faced with the limits of their mandate: they cannot lend to States which face a risk of default, because this first requires debt restructuring which is only possible with creditor agreements. This is why Sri Lanka, whose foreign exchange reserves are at their lowest and which has defaulted on its debt, has still not been able to enter into an IMF aid program, for lack of an agreement between its main creditors, first and foremost China and India.

The pandemic has seriously deteriorated the public finances of the vast majority of States, despite very uneven levels of expenditure to deal with it: at most 3% of their GDP for the poorest countries, up to 15% or 20% in advanced economies, says the World Bank. While 2022 was supposed to allow the economy to get back on track, the war in Ukraine has added an additional element of tension, by causing a significant increase in energy and food prices, which has caused a real crisis in the cost of living in the poorest countries.

Global growth should thus amount to 2.7% in 2023, i.e. 0.2 percentage point less compared to the last forecasts in July, after 3.2% in 2022. This would be the weakest performance of these two decades, with the exception of the global financial crisis of 2008 and the pandemic of 2020. A third of the international economy could thus experience a contraction in 2022 or 2023 subject to the evolution of the war in Ukraine and the the appearance of new variants of Covid-19. On the other hand, global inflation should have peaked in the third quarter (9.5%) and start to decline from the last quarter of 2022, continuing this trend next year, to return in the last quarter of 2023 to a level comparable to 2021 (4.7%).