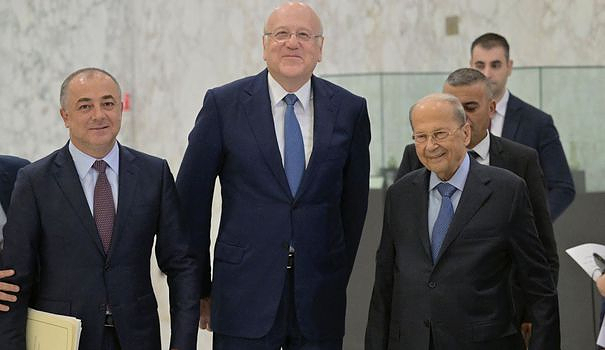 Two days after Israel, Lebanon announced, Thursday, October 13, to approve the maritime border demarcation agreement between the two countries. The text plans in particular to remove obstacles to the exploitation of gas fields in the eastern Mediterranean, in a context where gas prices are exploding and Europe is seeking new supplies.

Israel and Lebanon, two countries still officially at war, have "concluded a historic agreement" on the delimitation of their maritime border, even though their land border is still the subject of dispute. It must remove the obstacles to the extraction of hydrocarbons in the eastern Mediterranean. The text, now adopted by the two countries, was drawn up under American and French mediation. The final text of the agreement was submitted to Lebanon and Israel by US mediator Amos Hochstein earlier this week. It states that it "establishes a permanent and equitable resolution of their maritime dispute", according to a copy obtained by Agence France Presse.

Lebanon thus recovers all the exploration and exploitation rights of the Cana gas field, part of which is located in the territorial waters of Israel. But "Israel will be remunerated" by the firm operating Cana "for its rights to any deposits", according to the text of the agreement. Israel's remuneration will be determined during separate talks between the Jewish state and the consortium of companies in charge of exploration and exploitation in the Lebanese area - of which the French company TotalEnergies is a part. For its part, the Jewish state fully inherits the offshore deposit of Karish, located in the southwest, and should be able to start exploiting it shortly.

On Tuesday evening, US President Joe Biden hailed a "historic breakthrough" under the aegis of Washington. In a press release, the Elysée also announces that Emmanuel Macron spoke by telephone with the Israeli Prime Minister, the President of the Republic of Lebanon and the Lebanese Prime Minister, this Saturday October 15, 2022. undeniably an important step towards more peace for Israel, for Lebanon and all the countries and peoples of the region. It will contribute to the stability of the Middle East and to the security of Israel and Lebanon", says the text. "President Macron played a key role in what will be a historic agreement between Israel and Lebanon. France deserves immense recognition for its important contribution," a senior Israeli official told Le Monde newspaper.

After the entry into force of the agreement, Lebanon and Israel will deposit the geographical coordinates of the maritime border with the United Nations, which will cancel the lines adopted by the two countries in 2011. Although limited to the maritime line, this text would mark a turning point in relations between the two countries. "This historic agreement will strengthen Israel's security, inject billions into the Israeli economy and ensure the stability of our northern border with Lebanon," Israeli Prime Minister Yair Lapid tweeted. More measured, Lebanese President Michel Aoun welcomed a text that "meets Lebanon's demands and preserves its right to its natural resources", saying he hoped that the agreement would be "announced as soon as possible".

A seismic survey carried out in 2012 on a limited offshore area by the British company Spectrum estimated the recoverable gas reserves in Lebanon at around 720 billion cubic meters. According to Lebanese Oil financial modeling

In addition, this agreement gives hope that tensions, which are still high, will ease at the Lebanese-Israeli land border. "This agreement removes the possibility of armed confrontations with Hezbollah. Israel is not afraid of Hezbollah (...) but if it is possible to avoid a war, it is the government's responsibility to do so" , said Yaïr Lapid during a press conference in Jerusalem.

"This is the first time that we have signed an agreement on a border which has economic benefits for the two countries, and brings both security and economic stability", comments Elias Bou Saab, the vice-president of Parliament and principal Lebanese negotiator with Le Monde. "As soon as it is acted, we will have a much more peaceful border," he adds.

After more than a decade of fruitless negotiations and tensions, the talks resumed in 2020, under American mediation. A few weeks ago, the exchanges between the two parties were threatening. In June, Beirut warned the Jewish state against "any aggressive and provocative action" in disputed waters. In response, Israel assured that the Energean Power platform "would not extract gas in the disputed area", but said it was "ready to defend its strategic assets", while the army chief threatened Lebanon of "unprecedented bombardments" in the event of an attack by Hezbollah.

Since the beginning of the week, and the announcement of this agreement, the oppositions of each country have rather supported it. In Lebanon, the continuous collapse of the economy has overcome the reluctance, in particular of the President of Parliament, Nabih Berri, a stakeholder in the negotiations. Hezbollah has also given the green light. Its leader, Hassan Nasrallah, said on Tuesday that the Party of God would support the agreement approved by the Lebanese government.