UN report on Xinjiang: uncertainty and pressure surround its release

The former Chilean president has repeatedly said in recent months that she intends to publish it before the end of her term on August 31. 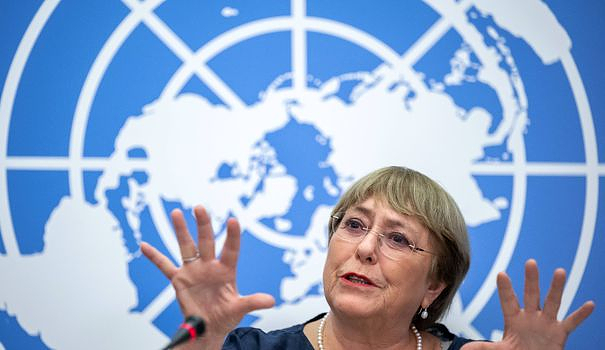 The former Chilean president has repeatedly said in recent months that she intends to publish it before the end of her term on August 31. But his uncertainty was palpable at his end-of-term press conference on Thursday.

"We are working on the report. It was my full intention to publish it before the end of my mandate, and we have received substantial contributions from the (Chinese) government which we will have to carefully consider, as we do every time for everything. country.... We are doing our best to do what I promised,” the High Commissioner said.

“I have been under enormous pressure to publish or not to publish (the report), but it is not these pressures that will make me publish it or stop publishing it,” she assured. .

The Chinese region of Xinjiang has long been the scene of bloody attacks targeting civilians and carried out, according to the authorities, by separatists and Islamists Uyghurs - the main ethnic group in the region.

This Chinese region has thus been the subject of draconian surveillance for several years.

According to several Western countries and independent organizations, Beijing has interned more than a million Uyghurs and members of other local Muslim ethnic groups in "re-education camps" in Xinjiang, even imposing "forced labor" or " forced sterilizations".

China strongly denies these accusations and presents the "camps" as "vocational training centers" intended to fight religious extremism and to train the inhabitants for a trade.

Following allegations of human rights violations against Uyghurs and other predominantly Muslim minorities that had been brought to the attention of Ms. Bachelet's services since the end of 2017, the latter informed the Council of the human rights in 2021 of the need for an "independent assessment".

Her report is eagerly awaited by NGOs, but also by some Westerners, including the United States, and she assured Thursday that she had been under pressure from all sides.

"You can't imagine the number of letters, meetings asking for publication. A huge amount. And this for more than a year, every day. Every time I am asked for a meeting, that there is a dinner , I know this topic is going to come up,” she said.

Ms. Bachelet, whose name of successor has not yet been revealed by UN Secretary General Antonio Guterres, also said that she had received letters from several dozen countries - whose names she did not mention - to her. asking not to publish the report.

During a rare visit to China in May, she called on Beijing to avoid "arbitrary" measures in Xinjiang, while denouncing "violent acts of extremism" in the region.

This visit to China was the first by a High Commissioner for Human Rights in 17 years. It followed tough negotiations between the UN and Beijing.

Since then, NGOs have been demanding the report even more insistently.

For the NGO Human Right Watchs, it is about the "credibility" of Ms. Bachelet.

"Her report is coming very, very late. She's going to publish it when she leaves, it's not ideal," HRW chief executive Kenneth Roth said in an interview this week with AFP in New York.

“I hope the report will be robust and allow us to increase the number of governments ready to condemn China, which is currently 47, to a number large enough to allow us to obtain a formal resolution of the Council. human rights," he said.