Ukrainian counter-offensive advances in the south

Since early September, Ukrainian forces have already inflicted a series of crushing setbacks on the Russians in the northeast and east of the country. 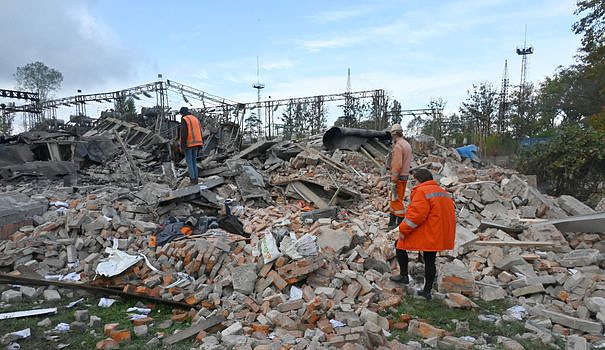 Since early September, Ukrainian forces have already inflicted a series of crushing setbacks on the Russians in the northeast and east of the country.

The head of the Russian occupation in Kherson, Vladimir Saldo, was the first to admit a Ukrainian "breakthrough" and in particular the loss of the village of Dudtchany, before assuring that the Russian air force had "stopped" the Ukrainian advance, according to an interview Monday afternoon published Tuesday on the Telegram page of the person concerned.

"The advance of the Ukrainian-Nazis in the Dudtchany area has been stopped (...) we must not panic", then hammered one of his deputies, Kirill Stremooussov, in a video broadcast Tuesday on his Telegram channel .

"We hear explosions in the distance but it's not that often," he said from the city of Kherson.

The Russian Telegram channel Rybar, which follows the movements of the Russian forces, noted that the Ukrainians were progressing in the areas of Arkhangelské and Dudtchany in order to "cut off the supplies of the Russian group on the right bank of the Dnipro".

According to Western and Ukrainian estimates, some 20,000 Russian soldiers are stationed in this area.

Ukrainian forces have concentrated fire in recent weeks on Russian positions and warehouses on the right bank of the Dnipro as well as the bridges spanning this river in order to cut off Russian supply lines.

However, kyiv still remains silent on its progress in the south of the country.

Ukrainian President Volodymyr Zelensky limited himself to saying in his Monday evening address that "new localities have been liberated in several regions".

"More and more occupiers seek to flee, more and more casualties are inflicted on the enemy army," he said.

In addition, for several days, videos of Ukrainian soldiers raising their flags in villages in the north of the Kherson region have multiplied online.

The chief of staff of the Ukrainian presidency, Andriï Yermak, posted a message of emoticons on Telegram showing Ukrainian flags and a watermelon, a fruit of which the Kherson region is a major producer.

Russian troops seized at the start of the invasion of Ukraine from Kherson on the Dnipro River, the only regional capital they have so far managed to conquer.

After a series of crushing defeats in northern and eastern Ukraine, Vladimir Putin's Russia decided to annex Lugansk, Donetsk, Kherson and Zaporizhya, four Ukrainian regions that it controls at least in part, and decreed a mobilization of hundreds of thousands of reservists.

But two days after the annexation ceremony, President Zelensky announced the takeover of Lyman, a strategic rail hub in eastern Ukraine, inflicting a new snub on Moscow.

The mobilization of reservists in Russia has also been chaotic, with the army coming under fire for calling up many reservists who should have been exempted for health or family reasons.

Nevertheless, Russian Defense Minister Sergei Shoigu welcomed the fact that since the mobilization order of September 21, more than 200,000 people have joined the army.

"The training of the personnel of the (newly) formed units is carried out on 80 military fields and in six training centers," he added.

The prospect of being sent to the front, however, also caused an exodus of tens of thousands of Russians, who left the country in particular for its Georgian, Kazakh, Mongolian and Finnish neighbors.

Vladimir Putin has sworn to defend the territories he has annexed, even threatening to use nuclear weapons and calling on Ukraine to stop fighting.

Mr. Zelensky replied to him on Friday by proclaiming that he “will not negotiate with Russia as long as Putin is the president”.

For their part, the Westerners have sworn that they will continue to support kyiv, in particular by sending modern weapons and ammunition which have done great harm to Russian forces.